Houndoom is a dual type Dark and Fire Pokemon introduced in Generation II. It evolves from Houndour starting at level 24. It can Mega Evolve into Mega Houndoom using the Houndoominite. Take a look below for 26 fun and interesting facts about Houndoom.

1. Houndoom is a quadruped, canine Pokemon that is mainly black with a long orange snout and an orange underbelly.

3. Around its neck is a white band with a small skull-shaped pendant on its throat.

4. There are two white bands on each of its ankles, as well as three rib-like ridges on its back.

5. Houndoom has a long, skinny tail with a triangular tip and three clawed toes on each paw.

6. On top of its head is a pair of long, curved gray horns.

7. These horns are smaller on the female than the male.

8. In a Houndoom pack, the one with its horns raked sharply towards the back serves a leadership role.

9. Leadership is determined by fights within the pack.

10. Its gut is full of toxins, which are used to create fire.

11. This gives Houndoom’s fire a foul odor and the wounds it inflicts will never heal.

13. Its howling induces shivering in other Pokémon, and often sends them scurrying back to their nests.

14. As Mega Houndoom, the ridges on its back thicken, and it gains additional, bone-like rings around the base of its tail. The rings on its tail have small spikes on top, causing them to resemble vertebrae. The ridge at the base of Mega Houndoom’s neck is longer and curves forward towards its shoulders.

15. Instead of a band with a skull pendant, there is a large, toothed structure around its neck. This bone-like formation has two large spikes on either side and three pointed teeth on the bottom.

16. Mega Houndoom’s horns now point straight up with a small, outward curve in the middle. The two bands on its hind legs have vanished, and those on its forelegs are broken in the front.

17. Its claws are a dark red due to its ability to generate more heat, which themselves cause pain to Mega Houndoom. Finally, the tip of its tail is now split down the middle. When it Mega Evolves, its entire body generates heat.

18. Houndoom has three different sprites in each Generation II game. It also shares this same trait in Generation IV games. This makes it one of the few Pokémon with this distinction.

19. Houndoom may have been based on the Cerberus of Greek and Roman mythology, or other legends of hellhounds. Houndoom is also similar in appearance to Dobermanns. Its tail resembles that of common depictions of the devil.

20. Houndoom also seems to bear some resemblance to the extinct thylacine, a hound-like marsupial with a lean body and stripey pattern on its back, much like Houndoom in respects of appearance. Houndoom’s Shiny coloration could be based on Yama, the Hindu Lord of the Fallen, who often appears blue and red.

21. Houndoom is a combination of hound and doom.

22. Harrison used a Houndoom during the Silver Conference, where it helped in recovering the flame of Ho-Oh and defeated Ash’s Snorlax in their battle. However, it lost to Ash’s Bayleef and was Harrison’s final Pokémon in the semifinals, in which it lost to a Rhyhorn. It was often seen outside of its Poké Ball.

23. Houndoom debuted in Houndoom’s Special Delivery, under the ownership of a Mareep farmer, who nicknamed it Doomy. When Misty’s Togepi got separated from Ash and his friends, it came across Doomy as it was delivering a package. Doomy then took Togepi to its home, where they were reunited with Ash’s group.

24. A Houndoom appeared in the beginning of Celebi: The Voice of the Forest, under the ownership of a Pokémon poacher. It was used alongside a Scyther to chase after Celebi.

25. Multiple Houndoom appeared in A Ruin with a View, under the ownership of Team Magma Grunts. They were used during the takeover of the Oldale Town Pokémon Center. They reappeared in a flashback in A Three Team Scheme!.

26. A Houndoom appeared in Mean With Envy and Pacifidlog Jam, under the ownership of Joshua. He used it during the Pacifidlog Town Contest. 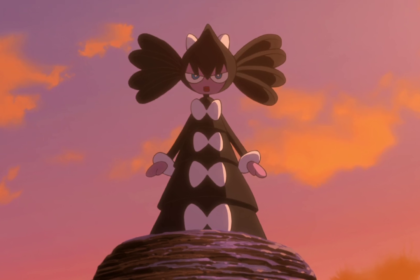 26 Fun And Amazing Facts About Gothitelle From Pokemon