1. His best known scientific contribution is research on extraterrestrial life, including experimental demonstration of the production of amino acids from basic chemicals by radiation.

2. Sagan assembled the first physical messages sent into space: the Pioneer plaque and the Voyager Golden Record, universal messages that could be potentially be understood by any extraterrestrial intelligence that might find them.

3. Sagan argued the now accepted hypothesis that the high surface temperatures of Venus can be attributed to and calculated using the greenhouse effect.

4. Sagan published more than 600 scientific papers and articles and was author, co-author or editor of more than 20 books.

5. He wrote many popular science books, such as The Dragons of Eden, Broca’s Brain and Pale Blue Dot, and narrated and co-wrote the award winning 1980 television series Cosmos: A Personal Voyage. 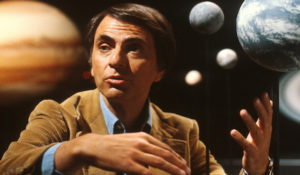 6. The most widely watched series in the history of American public television, Cosmos has been seen by at least 500 million people across 60 different countries.

7. He wrote the science fiction novel Contact, the basis for a 1997 film of the same name.

8. His papers, containing 595,000 items, are archived at The Library of Congress.

9. Sagan advocated scientific skeptical inquiry and the scientific method, pioneered exobiology and promoted the Search for Extra-Terrestrial Intelligence, or SETI.

10. He spent most of his career as a professor of astronomy at Cornell University, where he directed the Laboratory for Planetary Studies.

11. Sagan and his works received numerous awards and honors, including the NASA Distinguished Public Service Medal, the National Academy of Sciences Public Welfare Medal, the Pulitzer Prize for General Non-Fiction for his book The Dragons of Eden, and, regarding Cosmos: A Personal Voyage, two Emmy Awards, the Peabody Award and the Hugo Award.

12. He was married three times and had five children. 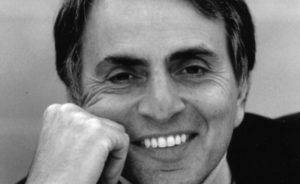 15. His father, Samuel Sagan, was an immigrant from Kamianets-Podilskyi, now in Ukraine, and worked in the garment industry. His mother, Rachel Molly Gruber, was from New York.

16. Sagan was the oldest of his parents’ two children; he had a sister named Carol. They lived in a modest house in Bensonhurst and had little money.

17. Their parents took care to nurture in them interest in different subjects, especially science.

18. In 1939, when he was four years old, he was taken to New York’s World Fair by his parents. Although still a small child, he was so impressed by the different exhibits, especially the “Futurama,” that he was able to recall them later in life.

19. He began his education at a local elementary school. He discovered that the Sun was a star and got amazed by the fact. Slowly, he began to develop interest in planets and stars. 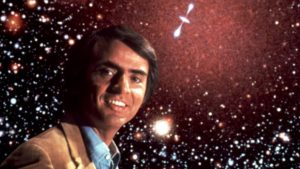 20. When he enrolled at the David A. Boody Junior High School, he developed interest in chemistry. However, astronomy remained his favorite hobby.

21. In 1948, the family shifted to Rahway, New Jersey and Sagan was enrolled at Rahway High School and graduated from there in 1951.

22. He attended University of Chicago for his undergraduate study and earned his B.A. degree in 1954.

23. A Sagan Unit is a number of at least 4 billion. The universe is about 3.4 Sagan years old and the Milky Way contains roughly 100 Sagan stars.

24. On Sagan’s 33rd birthday, NASA launched Saturn V, the most powerful rocket ever built to that point.

25. In an episode of Star Trek: Enterprise, you can see a plaque on Mars dedicated to the Carl Sagan Memorial Station. 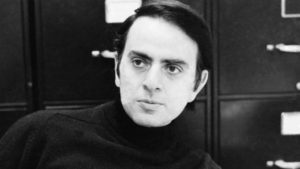 26. Sagan nearly died due to complications from corrective esophageal surgery just days before Neil Armstrong and Buzz Aldrin “entered the realm of myth and legend,” as Sagan later described it.

27. Sagan was among the first scientists to propose that Jupiter‘s moon Europa might house underground oceans, an idea later indirectly confirmed by the Galileo space probe.

28. Stanley Kubrick was unsure how to depict aliens in 2001: A Space Odyssey, so he sought advice from Sagan, who urged Kubrick to not depict them at all.

30. Sagan published a pro-marijuana essay in 1971 under the pseudonym Mr. X, and later openly advocated for legalization. 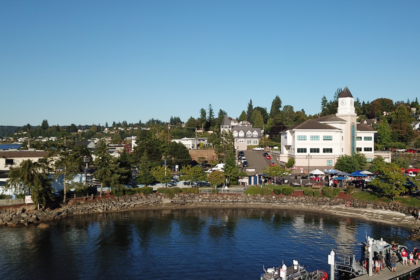