Singin’ in the Rain is a 1952 American musical romantic comedy movie directed and choreographed by Gene Kelly and Stanley Donen, starring Kelly, Donald O’Conner, and Debbie Reynolds. The movie offers a lighthearted depiction of Hollywood in the late 1920s, with the three stars portraying performers caught up in the transition from silent movies to “talkies.” Take a look below for 29 fun and fascinating facts about Singin’ in the Rain.

1. Singin’ in the Rain was only a modest hit when it was first released.

2. Donald O’Connor won the Golden Globe Award for Best Actor, and Betty Comden and Adolph Green won the Writers Guild of American Award for their screenplay, while Jean Hagen was nominated for the Academy Award for Best Supporting Actress.

3. Since it was first released, Singin’ in the Rain has been accorded legendary status by contemporary critics, and is frequently regarded as the best film musical ever made, and the best film ever made in the “Freed Unit” at Metro-Goldwyn-Mayer.

4. The movie topped the American Film Institute’s Greatest Movie Musicals list and is ranked as the fifth-greatest American motion picture of all time in its updated list of the greatest American films in 2007. 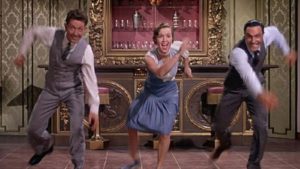 5. In 1989, the United States Library of Congress selected Singin’ in the Rain for preservation in the National Film Registry.

6. In 2005, the British Film Institute included the movie in their list of the 50 movies you should see by the age of 14.

8. Gene Kelly was a taskmaster with Debbie Reynolds, who had never danced to this degree before rehearsals started. Fred Astaire, who was in an adjacent dance studio, found her crying under a piano and reassured her that all of her hard work was worth the effort.

9. Debbie Reynolds remarked many years later that making Singin’ in the Rain and surviving childbirth were the two hardest things she’s ever had to do.

10. Only 19 years old when cast to play in the movie, Debbie Reynolds lived with her parents and commuted to the set. She had to wake up at 4 AM and ride three different buses to the studio; sometimes, to avoid the commute, she would just sleep on the set. 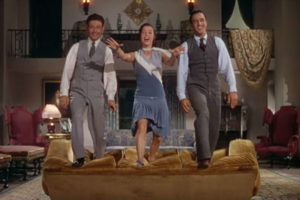 12. The original negative for Singin’ in the Rain was destroyed in a fire.

13. A microphone was hidden in Debbie Reynolds’ blouse so her lines could be heard more clearly. During one of the dance routines, her heartbeat can be heard, mirroring what happens to Lina Lamont in the movie itself.

14. Donald O’Conner admitted that he didn’t enjoy working with Gene Kelly, since Kelly was somewhat of a tyrant. O’Conner said that for the first several weeks, he was terrified of making a mistake and being yelled at by Kelly.

15. The script for the movie was written after the songs, and so the writers had to generate a plot into which the songs would fit.

16. At the 1972 Academy Awards, Gene Kelly deliberately ignored Malcolm McDowell because he was so offended by the graphic rape scene in “A Clockwork Orange” being performed to Kelly’s original vocal of “Singin’ in the Rain.”

17. The screenwriters bought a house in Hollywood from a former silent movie star who lost his wealth when the innovation of sound film killed his career. This was part of the inspiration for the movie.

18. Working days while filming Singin’ in the Rain sometimes stretched to 19 hours. 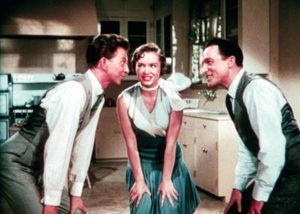 19. Studio technicians had to cover two outdoor city blocks on the backlot with tarp to make them dark for a night scene, and then equipped them with overheard sprays for Gene Kelly to perform the title number. Their efforts are all the more remarkable since there was a severe water shortage in Culver City the day the sequence was shot.

20. After finishing filming the “Make ’em Laugh” scene, Donald O’Conner was so tired that he went to bed for three days.

21. Cyd Charisse said that the long veil she wore during the “Broadway Ballet” sequence caught enough breeze from the fan that the pull almost caused her to lose her balance during some of the steps.

22. The “Broadway Ballet” scene took a month to rehearse, two weeks to shoot, and cost $600,000, which is almost a fifth of the overall budget.

23. The title number was originally supposed to be a showcase for the three leads but Gene Kelly figured it would work well to illustrate his character’s “joie de vivre.”

24. Milk was added to the water for the title number to make the rain appear more visible.

25. The last shot of the “Good Morning” scene, with Don, Kathy and Cosmo falling over the couch, took forty takes to film. 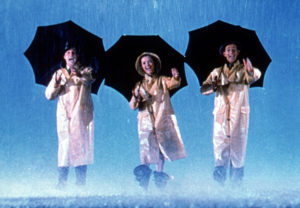 26. The movie’s network television premiere, schedule for November 23rd, 1963, on NBC, had to be postponed by two weeks due to the assassination of President John F. Kennedy and its aftermath.

27. Howard Keel was the original choice to play Don Lockwood; however, he was replaced by Gene Kelly as the screenwriters evolved the character from a Western actor background to a song-and-dance vaudeville background.

28. Cyd Charisse had to be taught how to smoke a cigarette for the “Broadway Ballet” scene. She stated that she never smoked another cigarette after that.

29. Like the character of Cosmo Brown, producer Arthur Freed was once employed as a mood-music pianist who played on movie sets during the silent film era.

30 Interesting And Fascinating Facts About It's A Wonderful Life 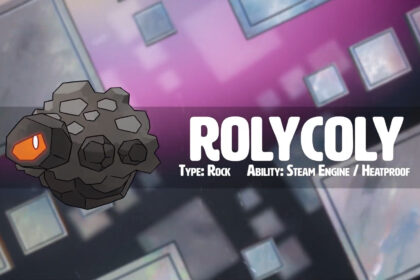 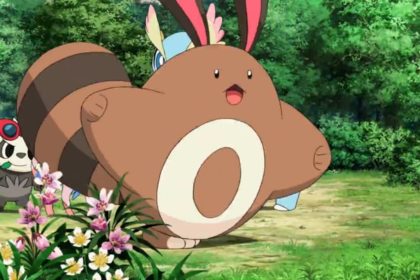