1. The Bridge on the River Kwai is a work of fiction, but borrows the construction of the Burma Railway in 1942 to 1943 for its historical setting.

2. The movie was filmed in Ceylon, which is now Sri Lanka. The bridge in the movie was near Kitulgala.

3. Carl Foreman was the initial screenwriter, but Lean replaced him with Michael Wilson. Both writers had to work in secret, as they were on the Hollywood blacklist and had fled to England in order to continue working.

4. The Bridge on the River Kwai was widely praised, winning seven Academy Awards, including Best Picture, at the 30th Academy Awards. 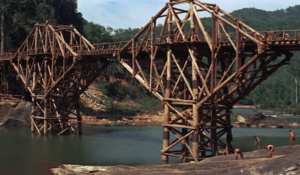 5. In 1997, the movie was deemed culturally, historically, or aesthetically significant and selected for preservation in the National Film Registry by the United States Library of Congress.

6. The movie has been included on the American Film Institute’s list of best American films ever made.

7. In 1999, the British Film Institute voted The Bridge on the River Kwai the 11th greatest British film of the 20th Century.

8. At one point during filming, David Lean nearly drowned when he was swept away by a river current. Geoffrey Horne saved his life.

9. The elephants employed in helping build the bridge would take breaks every four hours and lie around the water, whether the crew wanted them to or not.

10. For the scene when Colonel Nicholson emerges from the oven after several days confined there, Alec Guinness based his faltering walk on that of his son Matthew Guinness when he was recovering from polio. Guinness regarded this one tiny scene as some of the finest work he did throughout his entire career. 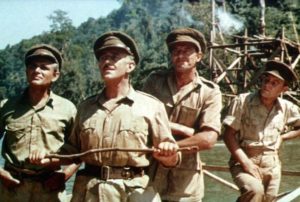 11. After the final scene was shot, producer Sam Spiegel shipped the movie footage on five different planes to minimize the risk of loss.

13. For the scenes where William Holden, Jack Hawkins, Geoffrey Horne and the native girls had to wade through swamps, they were wading through specially created ones. The real swamps in Ceylon were deemed to be too dangerous. Nevertheless, the leeches in the recreated swamps were real.

14. For one sunset scene, David Lean specifically traveled 150 miles to capture it.

15. Prior to casting Alec Guinness, Sam Spiegel tried to persuade Spencer Tracy to play the part of Colonel Nicholson. Tracy had read the book and told Spiegel emphatically that the part must be played by an Englishman.

16. Sessue Hayakawa edited his copy of the script to contain only his lines of dialog. This way, he remained oblivious to the real nature of his character’s fate. 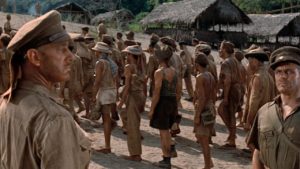 17. Sessue Hayakawa considered his performance as Saito as the highlight of his career.

18. Ian Watts, longtime professor of English at Stanford and author of the landmark “The Rise of the Novel,” had actually been a prisoner in the camp and helped with the construction of the bridge. He served as an adviser during the making of the movie.

19. To keep costs down, producer Sam Spiegel decided not to hire any extras, using crew members and Ceylon locals instead. This meant that some of the British prisoners were actually natives of the region wearing make-up to appear Caucasian.

20. When Columbia Pictures read the script for “Kwai”, it was concerned that the story was too much about men and had no love interest. At its behest, Sam Spiegel asked David Lean to incorporate a love scene. Although unconvinced of its merits, Lean agreed to include Shears’ affair with a British nurse.

21. The Suez Canal crisis of 1956 badly affected production. Vital equipment that would normally have been shipped through the canal had to be flown out to the location instead.

22. Around the time that he was offered the movie, David Lean had little money, as he was in the middle of a financially ruinous divorce, and was very much in need of a new project. He was contracted for $150,000 to be paid in installments. as soon as he signed, Lean borrowed $2,000 from Columbia Pictures to get his teeth fixed. 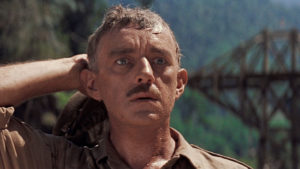 23. David Lean was completely at home in the hot and humid Ceylon jungle. Despite the discomfort the rest of the crew were experiencing, Lean was thrilled about the shoot and never complained about his living conditions.

24. There were no facilities on the island of Ceylon to process film rushes, so the day’s filming had to be flown to London to be processed and then flown back out to Ceylon.

25. Just as in “Love is a Many Splendored Thing”, normally hairy chested William Holden had to have a full body wax for his many shirtless scenes in the movie.

26. Sam Spiegel bought the railroad train from the Ceylonese government. It had previously belonged to an Indian maharajah and had seen 65 years of active service. Spiegel had it refurbished completely and then had one mile of railway track laid for it.

27. Assistant director John Kerrison was killed in a car crash on the way to one of the locations. A make-up man was also badly injured in the same accident.

28. Sessue Hayakawa really did accidentally strike Alec Guinness hard enough to draw blood in one scene. As shown in the movie, Guinness played the scene without flinching. 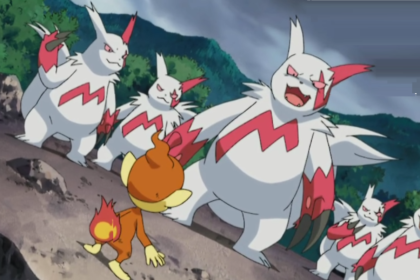 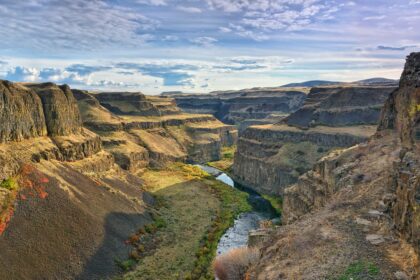 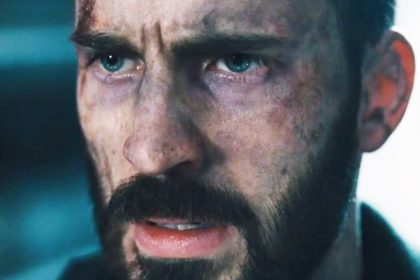