All Quiet on the Western Front is a 1930 American epic pre-Code war movie based on the Erich Maria Remarque novel of the same name. The movie is directed by Lewis Milestone and it stars Louis Wolheim, Lew Ayres, John Wray, Arnold Lucy and Ben Alexander. Take a look below for 27 more strange and interesting facts about All Quiet on the Western Front.

1. All Quiet on the Western Front opened to wide acclaim in the United States. It’s considered a realistic and harrowing account of warfare in World War I.

3. In 2008, when the American Film Institute polled over 1,500 workers in the creative community, All Quiet on the Western Front was ranked the seventh best American epic movie.

4. In 1990, the movie was selected and preserved by the United States Library of Congress’ National Film Registry as being deemed, “culturally, historically, or aesthetically significant.”

5. The movie was the first to win the Academy Awards for both Outstanding Production and Best Director. 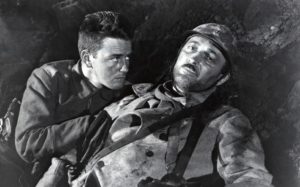 6. Nazi rabble rousers stormed screenings of the movie in Germany, often releasing rats or stink bombs into the theaters, as the wounds of defeat in World War I still ran deep. This led to the movie ultimately being banned by the Nazi party. It wouldn’t receive proper screenings in Germany until 1956, though it did play to packed houses in 1930 in neighboring Switzerland, France and the Netherlands with special trains and buses being laid on to transport Germans to screenings.

7. All Quiet on the Western Front is the final movie of Raymond Griffith, who played the dying French soldier Gerard Duval stabbed by Paul Baumer. He had lost his voice through illness as a child and was a popular silent movie star. The coming of sound meant the end of his career.

8. The movie was banned in Germany by Nazi Minister of the Interior Wilhelm Frick on the grounds that it ignominiously represented Germans as cowards. Ironically, in neighboring Poland, that country’s censorship board proscribed the movie on account of it’s being “pro-German.”

9. The iconic final shot was filmed during the editing process. All the actors had left so that is actually Lewis Milestone’s hand that we see in the final shot.

10. Until his death on December 19, 2014, Arthur Gardner was the only surviving member of either the cast or crew. 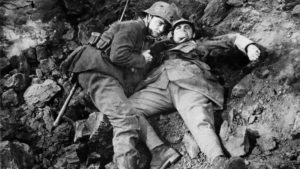 11. Lewis Milestone deliberately made the movie without music so as not to take away from the seriousness of the subject. Much to his displeasure, however, some movie theaters added music in of their own choosing, as they weren’t used to having movies delivered to them without any form of background scoring.

12. The Greek writing on the blackboard in the schoolroom is the beginning of Homer’s Odyssey: “Tell me Oh Muse of that ingenious hero who traveled far and wide.”

13. All Quiet on the Western Front was the first talkie war movie to win Academy Awards.

14. The movie was made for the then considerable sum of $1.25 million. The fact that production began only a few months after the 1929 stock market crash puts into perspective the massive gamble taken by Universal Pictures in making the movie.

15. Douglas Fairbanks Jr. and even the book’s author, Erich Maria Remarque, were both considered for the lead role.

16. In part because of his experience in playing the part of Paul Baumer, Lew Ayres became a conscientious objector during the Second World War. His movies were banned in over 100 Chicago theaters. 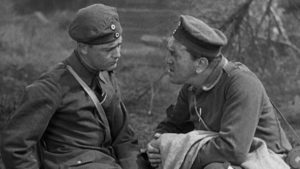 17. Two-time Oscar-winning director Fred Zinnemann got his first job in Hollywood in the minor roles of a German soldier and a French ambulance driver. He was later fired for impudence.

18. Louis Wolheim earned some of the best notices of his career playing the Sergeant. He was set to star in Lewis Milestone’s next movie, The Front Page, when he unexpectedly died of stomach cancer in 1931.

20. Around 2,000 extras were used in the movie, many of them Germans, including former soldiers, who had moved to the United States after World War I.

21. Lewis Milestone’s attention to detail, and desire to be as authentic as possible, was such that the chief sanitary inspector of Orange County, California, insisted that production be halted while he checked on the sanitary conditions of the trenches built for the movie.

22. According to the reminiscences of director Lewis Milestone, audiences laughed when Zasu Pitts appeared as the mother in the original cut, and that is why he recast the role with Beryl Mercer. 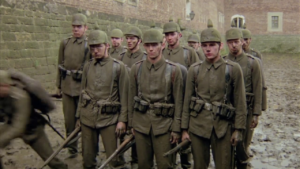 23. Future director George Cukor, having recently been brought out from Broadway where he was a renowned stage director, was employed as a dialogue coach on All Quiet on the Western Front. His job was to lessen the regional dialects of the actors so that American audiences could identify with the characters.

24. The silent version premiered 73 years after the movie’s release, in the U.K. that is, at the Watershed in Bristol on Sunday, November 23, 2003.

25. All Quiet on the Western Front is the first sound movie of director Lewis Milestone.

26. All Quiet on the Western Front is the second most popular movie at the U.S. box office for 1930.

27. It was originally banned in New Zealand in 1930 as anti-war propaganda. 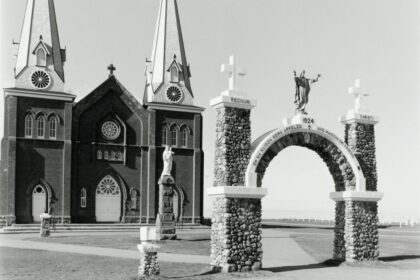 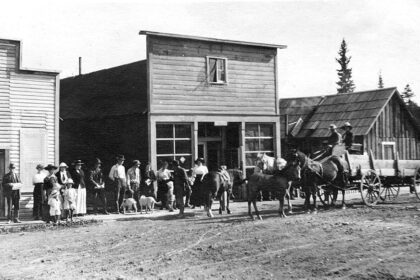