The PlayStation, which is often known as the PS1, is a home video game console developed and marketed by Sony Computer Entertainment. The console was released on December 3, 1994, in Japan, September 9, 1995, in North America, September 29, 1995, in Europe, and November 15, 1995, in Australia. Take a look below for 26 more fun and fascinating facts about the PlayStation.

2. The PlayStation was the first computer entertainment platform to ship 100 million units, which it had reached 9 years and 6 months after its initial launch.

3. In 2000, a redesigned, slim version called the PS one was released, replacing the original grey console and named appropriately to avoid confusion with its successor, the PlayStation 2.

4. The buttons on the first PlayStation controller had a distinct purpose. The triangle represented a person’s viewpoint. The square was meant to symbolize a map. The circle and “X” were meant to represent “Yes” and “No” respectively, and it was thought that games released on the system would use controls based on the meaning of these symbols. 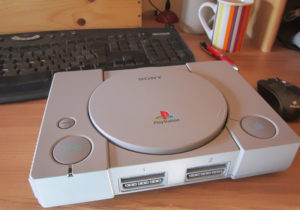 5. The PS one was originally planned as a Nintendo CD add-on, with Sony set to design its electronic components. When Nintendo ditched the project, Sony decided to make a console anyway.

6. At MacWorld 1999, Steve Jobs unveiled an unofficial PlayStation emulator for the Mac and had a live demo of Crash Bandicoot Warped.

7. Due to supply shortages of the newly released PlayStation 2, the diminutive PS one was the top selling video game console of the 2000 holiday season.

8. Sony released a special version of the PlayStation called the Net Yaroze which let owners develop their own games on a home computer.

9. The original PlayStation became a highly sought item for audiophiles after it gained a reputation for outperforming high-end CD players costing thousands of dollars.

10. In 1991, Sony revealed that it was working on a new version of the SNES, complete with a CD-ROM drive and that it was called the “Play Station”. However, when Nintendo pulled out of the partnership, Sony’s president Norio Ohga told his engineers to keep working on the system.

11. The resulting PlayStation console was announced in 1993, under its working title the PS-X.

12. In the 1980s and early 1990s, most consoles came with flat joypads. However, Teiyu Goto, the creator of the iconic two-handled PlayStation controller, felt that the 3D design matched the 3D visuals of the games. 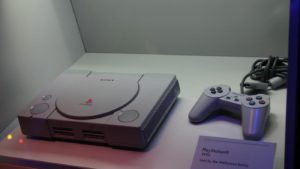 13. Many managers within Sony were resistant to the new PlayStation controller, but Goto had the support of Sony president and keen pilot Norio Ohga, who liked the device because it reminded him of an airplane control wheel.

14. Sony updated the PlayStation hardware several times over its lifespan, removing defunct or expensive features to cut down on production costs.

15. The earlier SCPH-1001 model of the PlayStation featured separate RCA output jacks for video and audio and some argue that it’s one of the best audio CD  players ever made.

16. The PlayStation saw a few novelty controllers during its lifetime, including the massive PlayStation Analog Joystick, which was released in 1996 to accompany the mech battle game Armoured Core, and the official PlayStation mouse for strategy games.

17. The officially endorsed third-party peripherals included the Agetec’s Bass Landing fishing rod, which some players used for fighting games, and the bizarre Namco NeGcon controller, that had a twisty middle section designed for racing titles.

20. There were 8 PlayStation games available on launch, including 2 mahjong titles, a train simulator and the much awaited game, a version of Namco’s arcade driving simulator Ridge Racer. The game ran a playable version of the classic shooter Galaxian while it loaded, which was an idea suggested by producer Yozo Sakagami who once worked on Galaxian. 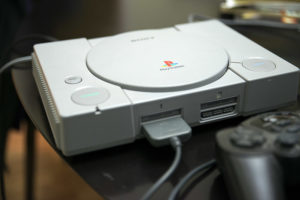 21. The first major Sony developed game was Motor Toon Grand Prix and it was developed by a small team called Poly’s. The team would go on to become Polyphony Digital, who are the creators of the legendary Gran Turismo series.

22. In 1994, Namco developed an arcade board called System 11, which was based on the prototype PlayStation specifications. The first major game title to use the board was the fighting game Tekken, which started off as a test program to experiment with texture mapped polygonal character.

23. The PlayStation was the second major console to offer external memory cards for game saves, the first being SNK’s Neo Geo machine that launched in 1990.

24. While Neo Geo’s external save card offered just 2K of storage, the PlayStation’s had 128k, which was separated into 15 save blocks.

25. Before PlayStation launched in the United States in 1995, head of Atari, Sam Tramiel, threatened to report Sony to the International Trade Commission if it launched the console for less than $300. Tramiel stated, “You can’t have the Japanese consumer paying a fattened dollar price, then subsidise the product and dump it in the United States for $249 and kill the U.S. manufacturers. It’s against the law.” Sony launched the PlayStation for $299 anyway.

26. In 2013, Sony sent a gold PS one to Minecraft creator Markus “Notch” Persson as an invitation to its VIP event at the E3 game conference. 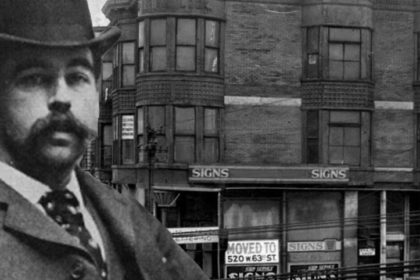 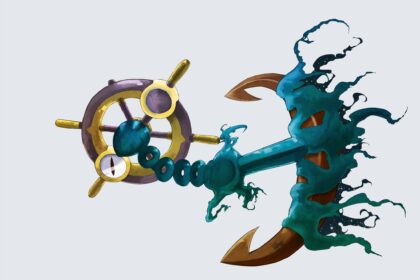 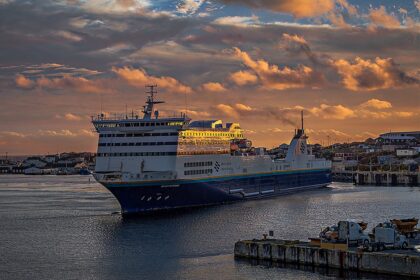