Pomegranates are a fruit-bearing deciduous shrub or small tree in the family Lythraceae that grows between 5 and 8 meters, or 16 and 26 feet, tall. The fruit is typically in season in the Northern Hemisphere from September to February, and in the Southern Hemisphere from March to May. Take a look below for 26 more fun and fascinating facts about pomegranates.

1. As intact arils or juice, pomegranates are used in baking, cooking, juice blends, meal garnishes, smoothies, and alcoholic beverages, such as cocktails and wine.

2. Pomegranates originated in the region extending from modern-day Iran through Afghanistan and Pakistan to northern India, and has been cultivated since ancient times throughout the Mediterranean region.

3. Pomegranates were introduced into Spanish America in the late 16th century and into California by Spanish settlers in 1769. 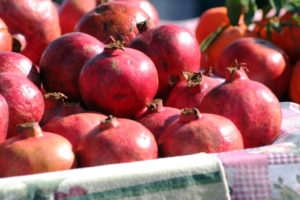 5. The French term for pomegranate, “grenade,” has given its name to the military grenade.

6. Pomegranate shrubs grow to 6 to 10 meters, or 20 to 33 feet, in height, and have multiple spiny branches. They’re also extremely long-lived, with some specimens in France surviving for 200 years.

8. A large, dry pomegranate was found in the tomb of Djehuty, the butler of Queen Hatsheput in Egypt.

9. There are over 760 varieties of pomegranate.

10. Pomegranate remains dating back to 1000 BC have been found in Transcaucasia.

11. In early English, the pomegranate was called the “apple of Grenada.” 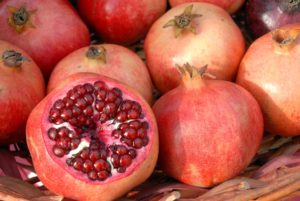 12. Pomegranates are mentioned many times in the Bible. Exodus 28:33-34 says that images of pomegranates should be woven onto the hem of the robe worn by the Hebrew High Priest.

13. Jewish tradition teaches that the pomegranate is a symbol of righteousness because its 613 seeds correspond with the 613 commandments of the Torah. However, the number of seeds in each pomegranate varies.

14. Pomegranate is one of the seven spices, seven fruits and grains named in the Hebrew Bible as being native to Israel.

15. Many scholars believe that it was a pomegranate and not an apple that tempted Adam and Eve in the Garden of Eden.

16. In the Qur’an, pomegranates are named as one of the fruits that will grown in the gardens of paradise.

17. In Hinduism, the pomegranate symbolizes prosperity and fertility. 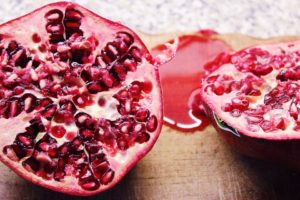 18. The pomegranate was an emblem in the coat of arms of Catherine of Aragon, Henry the VII’s first wife. When Anne Boleyn took her place as Henry’s wife, she changed the emblem to an image of a white dove pecking at the pomegranate.

20. In Greek mythology, Persephone is condemned to spend every winter in the underworld after the god Hades tricks her into eating pomegranate seeds.

21. In Greece, a traditional housewarming gift is a pomegranate placed under or near the home altar of the house in order to bring good luck, fertility and abundance.

22. In Greek culture, it’s traditional to break pomegranates on the ground at weddings and on New Year’s. 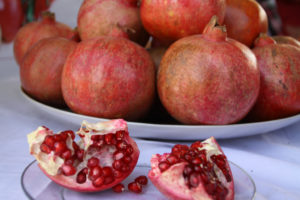 24. In the Northern Hemisphere, pomegranate season is from September to February. This has earned the fruit the nickname “The Jewel of Winter.”

25. Every October, the Pomegranate Festival is held in Goychay, Azerbaijan. The festival features pomegranate cuisine, dancing and music.

26. In India’s ancient Ayurveda system of traditional medicine, the pomegranate is frequently described as an ingredient in remedies. 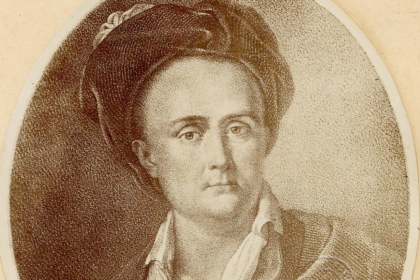 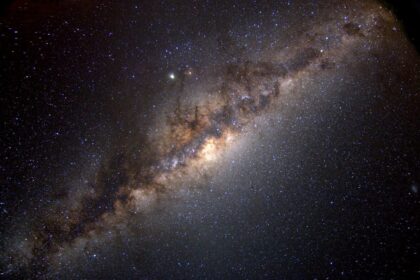