Gerbils are mammals that come from the rodent family. Other members of the rodent family are rats, mice, guinea pigs and hamsters.The Mongolian gerbil, Meriones unguiculatus, is the most common gerbil in the world. Take a look below for 30 more interesting and weird facts about gerbils.

1.The fat tailed gerbil, Duprasi gerbil, is one of the most common pet gerbils; aside from the Mongolian gerbil. Other common names for this species are; the fat tailed jird, fat tailed rat, or the beer mat gerbil.

2. The scientific name for a Mongolian gerbil, Meriones unguiculatus, roughly translated to “the clawed warrior.”

3. The clawed warrior came from a story involving Emperor Genghis Khan, who was the leader of the Mongol Empire from 1206 to 1227. The story goes that he was sleeping one night and an assassin broke into his quarters. A gerbil supposedly bit the foot of the assassin and caused the assassin to let out a shout, which then woke the Emperor. The Emperor prevented the assassin from killing him and after realizing that the gerbil defended him, adopted the gerbil as his own, giving him the nickname of the clawed warrior.

4. Gerbils were imported to the United States in 1954 when Dr. Victor Schwentker brought them in for research purposes.

5. They were imported to the United Kingdom in 1964 when they become popular as pets.

6. There are over 100 known species of gerbil in the wild. 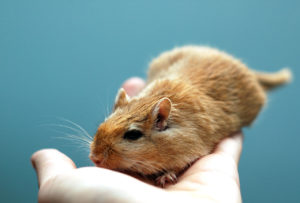 7. Wild gerbils can be found in desert areas across Africa, Asia and India.

8. They’re territorial. They use a scent gland that is located on their chest to mark their territory. They do this by rubbing up against an object with their chest.

9. Wild gerbils live between 2 to 3 years, while in captivity they live between 4 to 6 years because of better living conditions.

11. They’re not aggressive by nature and will not attack anyone unless they’re provoked.

12. They’re nocturnal, which means that they’re active during the night while they sleep during the day. However, they’re known for having long naps before being active, then falling back to sleep soon after.

13. They’re social creatures and don’t like being alone, which means that they’re best kept in pairs of the same sex if you plan on having them as pets.

15. Wild gerbils live in family groups that are made up of a male and female with a few generations of offspring.

16. Mongolian gerbils are around 6 to 12 inches in length, when measured from their head to their tail. 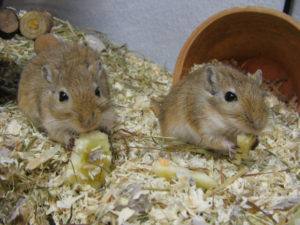 17. The tail makes up more than half of the length of a Mongolian gerbil.

18. Their entire body is covered with fur, including their tail. The color of their fur depends on the species they are. Some colors they come in are golden agouti, black, burmese, light red fox and schimmel.

19. Wild gerbils dig underground burrows for shelter, for storing food and for keeping their offspring safe. Some of these burrows can be 6 feet deep.

20. They’re known for having long hind legs that help them jump very high for such a small animal. They also use their hind legs to thump the ground for communication with other gerbils.

21. They have constantly growing teeth. Due to this, they chew on many objects to try and cut them back. If they don’t do this, the teeth will continue to grow and it will become very painful for them.

22. Since their bodies try and keep as much water in them as possible, they rarely urinate.

24. Female gerbils remain pregnant for 21 to 26 days. When the offspring are born, they’re blind, deaf and without hair. They can give birth to between 3 and 7 offspring at a time.

25. Both the male and female gerbils will look after the offspring and teach them to fend for themselves. 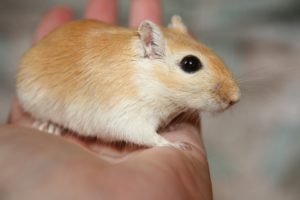 26. Gerbils are omnivores which means that they eat a plant based and animal based diet. Their diet consists of various fruits, nuts, seeds and insects.

27. They’re known for eating their own feces as they absorb every last nutrient that’s left in their first digestion. This gives them vitamin B and other nutrients that they need.

28. In California, United States, it’s illegal to purchase, keep or import a gerbil as a pet. This is because they pose a serious threat to the local indigenous ecosystem and agricultural operation.

29. When they’re kept as a pet, they’re better kept in a tank than a cage because they will gnaw on the metal bars, which can be bad for them.

30. Their hearing is extremely sensitive, which is one of the primary defense mechanisms they have against predators. 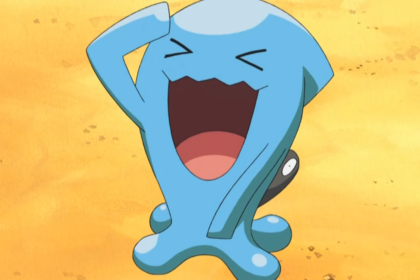 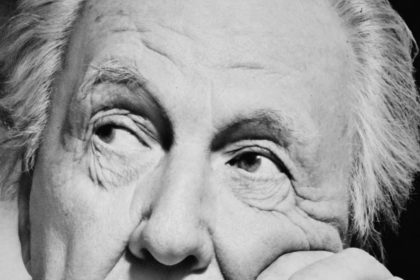 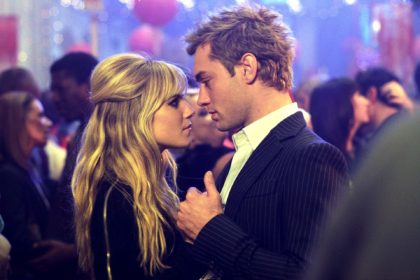