Samuel Langhorne Clemens, better know by his pen name Mark Twain, was an American writer, humorist, entrepreneur, publisher and lecturer. Among his novels are The Adventures of Tom Swayer and its sequel, the Adventures of Huckleberry Finn. Take a look below for 30 more interesting and fun facts about Mark Twain.

1. Twain was raised in Hannibal, Missouri, which later provided the setting for Tom Swayer and Huckleberry Finn.

2. He served an apprenticeship with a printer and then worked as a typesetter, contributing articles to the newspaper of his older brother Orion Clemens.

3. He later become a riverboat pilot on the Mississippi River before heading west to join Orion in Nevada.

4. Twain referred humorously to his lack of success at mining, turning to journalism for the Virginia City Territorial Enterprise.

5. His humorous story, “The Celebrated Jumping Frog of Calaveras County,” was published in 1865, based on a story that he heard at Angels Hotel in Angels Camp, California, where he had spent some time as a miner. 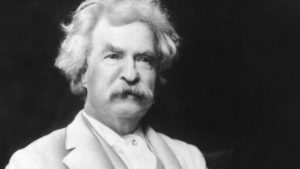 6. His wit and satire, in prose and speech, earned praise from critics and peers, and he was a friend to presidents, artists, industrialists and European royalty.

7. Twain earned a great deal of money from his writings and lectures, but he invested in ventures that lost most of it; notably the Paige Compositor, a mechanical typesetter that failed because of its complexity and imprecision.

8. He filed for bankruptcy in the wake of his financial setbacks, but he eventually overcame his financial troubles with the help of Henry Huttleston Rogers.

9. Twain chose to pay all his pre-bankruptcy creditors in full, even after he had no legal responsibility to do so.

10. Twain was born shortly after an appearance of Halley’s Comet, and he predicted that he would “go out with it” as well. He died the day after the comet returned.

11. He was lauded as the “greatest humorist this country has produced,” and William Faulkner called him “the father of American literature.” 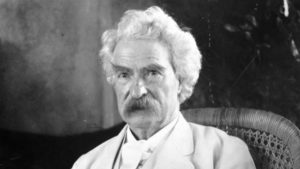 12. Twain hated Jane Austen with a passion, saying, “Every time I read Pride and Prejudice I want to dig her up and beat her over the skull with her own shin bone.”

13. He called The Book of Mormon “chloroform in print.”

14. Twain was a noted abolitionist and women’s rights activist. He paid for the schooling of black people, including paying one man’s tuition for Yale Law School.

15. He initially supported American Imperialism but, after discovering America’s true motives in the Philippine-American War by reading the Treaty of Paris, he changed his position, saying, “And so I am an anti-imperialist. I am opposed to having the eagle put its talons on any other land.”

16. He wrote an essay from the perspective of Satan composing a series of letters about Earth.

17. He discouraged the use of exclamation marks because it’s like laughing at your own joke.

18. Despite making dozes of recordings of his voice on wax cylinders, no known recordings of Mark Twain’s voice are known to have survived.

19. Nikola Tesla and Mark Twain were friends. They became friends after Tesla cured Twain of constipation by passing an electrical current through his body. 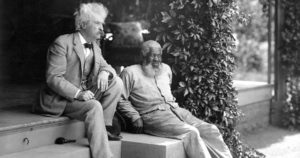 20. He patented under his real name, Samuel Clemens, the Adjustable and Detachable Straps for Garments, or suspenders, in 1871.

21. Twain had a near fatal heart attack in 1898 after watching a belly dancer’s routine.

22. When he was 30 years old, Twain wrote an illustrated children’s book called Advice to Little Girls. Lost and unknown for generations, it has been rediscovered.

24. In 1906, Twain, lonely and missing his wife and daughters, formed a club of young girls called the Angelfish Club who met regularly at his house to play cards.

25. In 1872, he tried surfing in Hawaii but failed saying, “The board struck the shore in three quarters of a second, without any cargo, and I stuck the bottom about the same time, with a couple of barrels of water in me.” 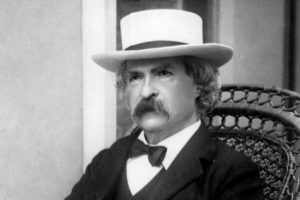 26. He was fond of cats. His boyhood home is rumored to have shared with as many as 19 cats. As an adult, Twain always kept at least two cats around.

27. Twain encouraged his younger brother, Henry, to get a job as a steamboat pilot. Henry was killed when the boiler on board his boat exploded. Twain claimed to have seen his brother’s death in a dream before it happened, which sparked his interest in parapsychology.

28. He was said to have been working on a ghost story right before he died. However, no one found it for he ordered all of his manuscripts burned when he died.

29. He was critical of organized religion, and very much in favor of labor unions. He was also a part of the Freemasons.

30. Twain was a passenger on the first luxury cruise to Europe and the Holy Land. He talked about his journey in letters to the New York Tribune and the Herald. He later worked his letters into his first book, The Innocents Abroad, which became a big success. 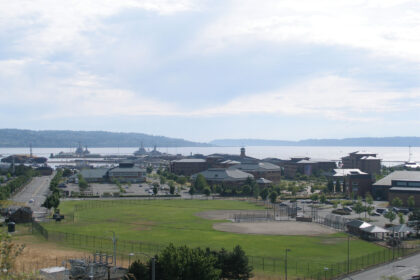 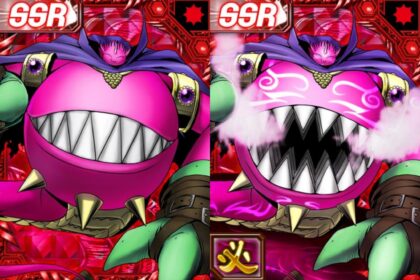 10 Fascinating And Fun Facts About Bacchusmon (Deisui Mode) From Digimon