Taxi Driver is a 1976 American neo-noir psychological thriller movie directed by Martin Scorsese and written by Paul Schrader. Set in New York City following the Vietnam War, the movie stars Robert De Niro as a lonely war veteran who takes a job as a taxi driver to cope with his chronic insomnia. The movie also features Jodie Foster, Harvey Keitel, Cybill Shepherd, Peter Boyle, and Albert Brooks. Take a look below for 30 more interesting and fascinating facts about Taxi Driver.

2. Taxi Driver won the Palme d’Or at the 1976 Cannes Film Festival. It’s regularly cited by critics, film directors, and audiences as one of the greatest movies of all time.

3. In 2012, Sight & Sound named Taxi Driver the 31st best movie ever in its decennial critics’ poll, ranked with The Godfather Part II, and the 5th greatest movie of all time on its directors’ poll.

4. In 1994, the movie was considered, “culturally, historically or aesthetically,” significant by the U.S. Library of Congress and was selected for preservation in the National Film Registry.

5. Robert De Niro worked 15 hour days for a month driving cabs as preparation for this role. He also studied mental illness, and, during his off-time when filming 1900, visited a U.S. Army base in Northern Italy and tape-recorded conversations with Midwestern soldiers so that he could pick up their accent. 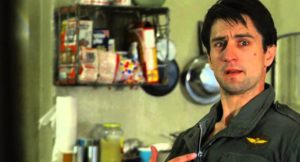 6. Director Martin Scorsese claims that the most important shot in the movie is when Bickle is on the phone trying to get another date with Betsy. The camera moves to the side slowly and pans down the long, empty hallway next to Bickle, as if to suggest that the phone conversation is too painful and pathetic to bear.

7. Paul Schrader wrote the script in ten days via two drafts, one after the other. As he was writing, he kept a loaded gun on his desk for motivation and inspiration.

9. Jodie Foster claims that Robert De Niro would regularly phone her up and suggest they have coffee together. They would then rehearse the diner scene over and over to the point where Foster got bored, but still De Niro would insist they continue rehearsing.

10. Robert De Niro has said that, despite having won an Oscar for The Godfather: Part II, he was still a relatively unfamiliar face, and was only actually recognized once while driving a New York cab during his research for Taxi Driver. 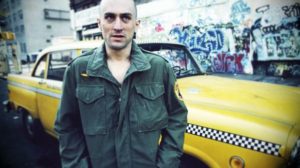 11. The producers were looking for a “Cybill Shepherd” type to play the female lead in the movie. When agent Sue Mengers heard this, she reportedly called them and asked why not hire Cybill Shepherd.

12. Harvey Keitel rehearsed with pimps to prepare for his role. The scene where Sport and Iris dance was improvised, and is one of only two scenes in the movie that don’t focus on Bickle.

13. Harvey Keitel was originally offered the part of the campaign worker, eventually played by Albert Brooks. He decided to take the role as the pimp, even though in the script, he was black and only had about five lines.

14. In Paul Schrader’s original screenplay, the characters of Sport, the Mafioso, and the hotel clerk were all black. Martin Scorsese felt that, combined with other events in the movie, this would have stacked the deck too much towards racism, and suggested that those characters be changed to white men. Schrader relented.

15. Martin Scorsese was reluctant to edit the climactic and very bloody shoot-out to avoid an X rating. However, he was amused by the changes ordered by the MPAA, because they made the final scene even more shocking than had originally been intended.

16. Paul Schrader wrote the part of Travis with Jeff Bridges in mind. 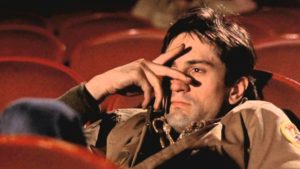 17. Martin Scorsese has said that he offered the role of Travis Bickle to Dustin Hoffman. According to Hoffman, he turned the role down because he, “thought he (Scorsese) was crazy!” He has since regretted his decision.

20. Robert De Niro claimed that the final shoot-out scene took particularly long, because of both technical problems, and the humor which arose from the tension created by the carnage in the scene.

21. Steven Prince improvised the list of additional illegal things Easy Andy had for sale after Travis buys the gun.

22. The girl with whom Martin Scorsese studied in order to prepare for the role of Iris also appeared in the movie, as Iris’ friend on the street.

23. Producer Julia Phillips claimed that Martin Scorsese cast Cybill Shepherd as Betsy because of the size of her bum, which added to her sex appeal. Phillips further revealed that Scorsese and Shepard had a difficult relationship on set, with Scorsese having to feed Shepherd line readings to achieve a credible performance. 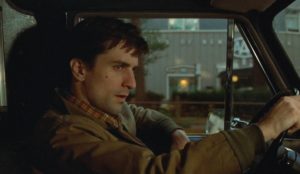 24. The only camera direction that Paul Schrader wrote in the script was the overhead tracking shot after the bloody shoot-out.

25. Robert De Niro has claimed that the, “You talkin’ to me?”, scene was inspired by Bruce Springsteen’s banter with his audience at a mid 1970s gig.

26. Taxi Driver was the last Columbia Pictures feature to use the classic Torch Lady logo in her classic appearance.

27. Melanie Griffith was originally offered the role of Iris, but her mother Tippi Hedren made her turn down the offer. She was the first choice to play the part.

28. Due to injuries sustained in an accident during the production of The Farmer, George Memmoli had to decline the bit part of Travis’ disturbed passenger, who was ultimately played by Martin Scorsese.

29. Bernard Herrmann wasn’t going to write the score for Taxi Driver, but agreed to do it when he saw the scene where Bickle pours Schnapps on his bread. Herrmann died on Christmas Eve of 1975, just a few hours after completing the recording sessions for this movie, and the movie was dedicated to his memory.

30. Due to a garbage strike at the time of filming, much of the on-screen filth is real. 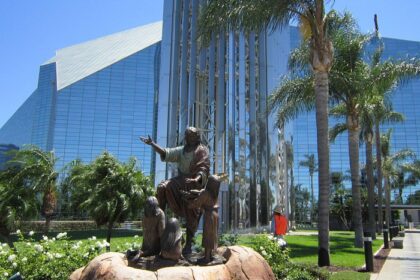 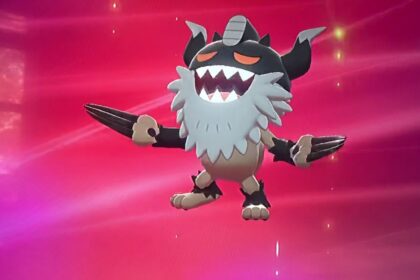 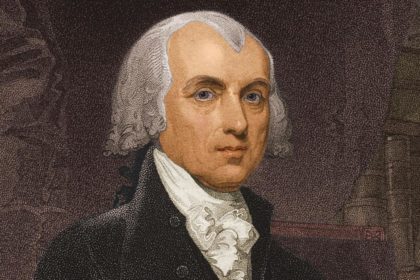