Ready Player One is a 2018 American science fiction adventure movie produced and directed by Steven Spielberg, and written by Zak Penn and Ernest Cline, based on Cline’s 2011 novel of the same name. The movie stars Tye Sheridan, Olivia Cooke, Ben Mendelsohn, Lena Waithe, Simon Pegg and Mark Rylance. Take a look below for 30 more fun and interesting facts about Ready Player One.

1. The movie is set in the year 2045, when much of humanity, escaping the desolation of the real world, uses the virtual reality software OASIS to engage in work and play. Wade Watts discovers clues to a hidden game within the program that promises the winner full ownership of the OASIS, and joins several allies to try to complete the game before indentured players working for a large company, run by Nolan Sorrento, can do so.

2. In an interview, Steven Spielberg said that Ready Player One was the third most difficult movie had has made in his career, behind Jaws and Saving Private Ryan.

3. The movie is directed by Steven Spielberg who is referenced, along with some of his movies, in Ernest Cline’s source novel. Spielberg had stated that he would remove these references, although some, like the Delorean and a Tyrannosaurus Rex, do appear. 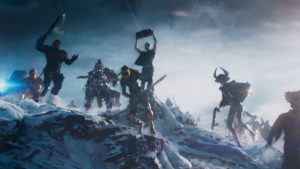 6. Ready Player One was originally scheduled to be released on December 15, 2017. It was pushed back to March 30, 2018, to avoid competition with Star Wars: The Last Jedi.

7. The teaser trailer contains an orchestral version of the song “Pure Imagination” from the movie Willy Wonka and the Chocolate Factory. It also contains a segment of the song “Tom Sawyer” by Rush.

10. Elle Fanning and Lola Kirke were considered for the role of Art3mis before Olivia Cooke was cast.

11. The last rifle spawned by Art3mis is a Lancer Assault Rifle with a chainsaw bayonet from the Gears of War video game. 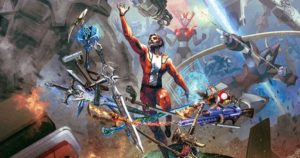 12. The Holy Hand Grenade used in the final battle is a callback to the Holy Hang Grenade of Antioch from Monty Python and the Holy Grail.

13. The source novel references the TV series Spaced, which is written by and stars Simon Pegg. Pegg plays Ogden Morrow in Ready Player One.

14. Ready Player One is Steven Spielberg’s first movie since Indiana Jones and the Kingdom of the Crystal Skull to be filmed in Panavision.

15. Steven Spielberg made The Post while he was waiting for Industrial Light & Magic to create close to 1,500 digital effect shots for Ready Player One.

16. In spite of being part of the High Five, Wade Watts or his avatar Perzival are never able to complete a high five; they’re always left hanging.

17. The spell cast to use the Orb of Osuvox is from the movie Excalibur. In modern Irish i’s, “Anail nathrach, ortha bhais is beatha, do cheal deanaimg.” This translates to, “Serpent’s breath, charm of death and life, thy omen of making.”

18. OASIS is actually an acronym. It stands for Ontologically Anthropocentric Sensory Immersive Simulation. This is mentioned in Ernest Cline’s source novel but not in the movie. 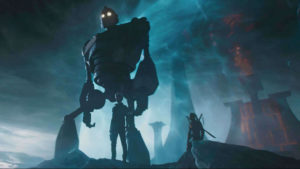 19. Nick Robinson, Nat Wolff, and Dalton Vaughn were considered for the role of Wade Watts before Tye Sheridan was cast.

20. In the scene where they’re discussing Art3mis’s possible real life persona, there is a picture of Will Wheaton on the mirror. In the book, Will is vice-president of the OASIS user council. He also reads the audio book for this and Ernest Cline’s second novel, Armada.

21. At one point in the movie, the group goes into a simulation of the hotel from The Shining. In real life, Steven Spielberg was close friends with The Shining’s director Stanley Kubrick. Spielberg once even called the scene where Wendy finds Jack’s novel as, “a great example of counter intuitive direction.”

22. Ready Player One was shipped to some cinemas under the pseudonym “Deep Blue.” Deep Blue is a supercomputer most known for playing chess again, and losing to, Chess Grandmaster Gary Kasparov.

23. Besides the obvious Bigfoot, Delorean, and Akira vehicles, other notables in the race were the Mach 5, Batmobile, A Team van, and Christine.

24. During the scene inside the shop, in the background you can see the flying RV from Spaceballs, and also Riply’s mech suit from Aliens. 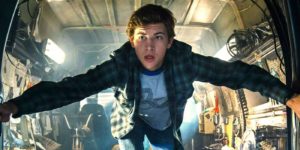 25. Warner Brothers and De Line Pictures won an auction for the rights to Ernest Cline’s novel Ready Player One in 2010, before it had been published.

26. The producers attempted to secure the rights to include several references to Star Wars: Episode IV – A New Hope. Disney, the actual owner of the franchise, allowed it but Steven Spielberg chose to downplay the Star Wars connections because the franchise was in the midst of its sequel and spin-off series.

27. Jane Douglas from the video game YouTube channel Outside Xbox is an extra in Ready Player One. In the first trailer, she’s sitting just behind a man with the numbers 665312 on his helmet.

29. Family Ties was a major influence on Ernest Cline while writing the Ready Player One book.

30. Ready Player One will be the first time Steven Spielberg and Simon Pegg have worked together since The Adventures of Tintin. 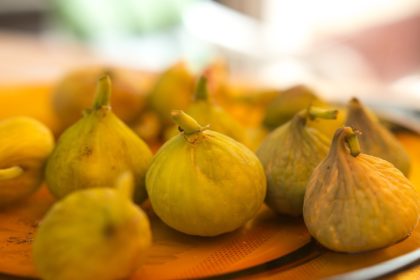 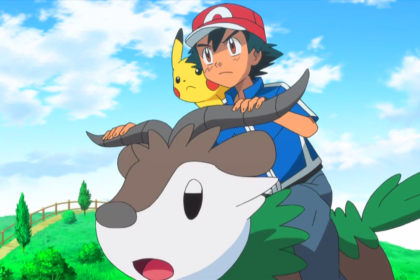