Mars is the fourth planet from the Sun and the second smallest planet in the Solar System after Mercury. In English, Mars was given the name of the Roman God of War, and is often referred to as the Red Planet because of the reddish iron oxide on its surface that gives it a reddish appearance. Take a look below for 30 more fun and interesting facts about the Planet Mars.

2. The gravity on the surface of Mars is only 37% that of the Earth’s. This means that you could jump nearly 3 times higher on Mars.

3. Mars is home to the tallest mountain the Solar System. The mountain is called Olympus Mons and it’s a shield volcano that is 21 kilometers high and 600 kilometers in diameter.

4. Despite the fact that Olympus Mons formed over billions of years, there is evidence that there is still volcanic lava flows which leads scientists to believe that it could still be active.

5. As of September, 2014, there have been about 40 missions to Mars, including orbiters, landers and rovers. Of those, only 18 missions have been successful.

6. Mars has the biggest dust storms in the Solar System. They can also last for months and cover the entire planet. 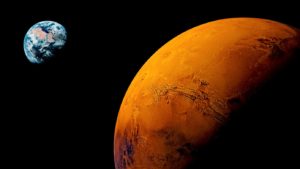 7. The seasons on Mars are so extreme because its elliptical orbital path around the Sun is more elongated than most other planets in the Solar System.

8. On Mars, the Sun appears about half the size as it does on Earth.

9. At the closest point to the Sun, the Martian southern hemisphere leans towards the Sun, causing a short but intensely hot summer, while the northern hemisphere endures a brief, cold winter.

11. Scientists have found tiny trace of Martian atmosphere within meteorites that were violently ejected from Mars, then orbiting the Solar System amongst galactic debris for millions of years, before crashing on Earth.

12. For years, Mas has been known to have water in the form of ice. The first signs of trickling water are dark stripes or stains on crater walls and cliffs that are seen in satellite images.

13. Due to Mars’ atmosphere the water found there would have to be salty to prevent it from freezing and vaporizing.

14. In the next 20 to 40 million years, Mars’ largest moon, Phobos, will be torn apart by gravitational forces leading to the creation of a ring that could last up to 100 million years.

15. The symbol for Mars looks like a shield and a spear from Ares, the God of War. It’s also the symbol for the male sex.

16. The Ancient Greeks thought that Earth was the center of the universe and that Mars was the one of the five traveling stars that revolved around it.

17. Egyptians called Mars the “backward traveler” because it appeared to move backwards through the zodiac every 25.7 months. 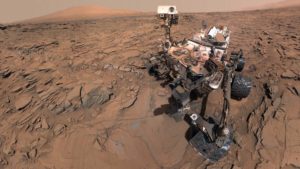 18. Mars gets its red color from iron oxide, which is also known as rust, and has the consistency of talcum powder. In other words, the metallic rocks on Mars are rusting.

19. The atmosphere, which is mostly made up of carbon dioxide, on Mars is so thin that water can’t exist in liquid form, it can only exist as water vapor or ice.

20. No human could survive the low pressure on Mars. Without a spacesuit, the oxygen in your blood would literally turn into bubbles, causing immediate death.

21. Mars doesn’t have an ozone layer, which means that the surface gets covered in a lethal dose of radiation every time that the Sun rises.

22. In 1976, Viking I photographed a mesa on Mars that had the appearance of a human face. Many people and organizations interesting in extraterrestrial life argued that intelligent beings created the “Face.” However, the Mars Global Surveyor found that the “Face” was likely an optical illusion.

23. Mars has the biggest labyrinth of intersecting canyons in the Solar System. It’s called the Noctis Labyrinthus, or the Labyrinth of the Night.

24. Mars has a massive canyon called Valles Marineris, or Mariner Valley, that’s about 2,500 miles long and 4 miles long. The canyon is as long as the continental United States, and it was likely formed by the tectonic cracking of Mars’ crust. It’s the longest known crevice in the Solar System.

25. The planet was formed about 4.5 billions years ago and is about 4,000 miles wide, which is half the diameter of Earth.

26. The Earth environment that most closely resembles the current conditions of Mars is that of the Antarctic deserts. However, even the most hostile environments on Earth are far more suitable for life than the surface of Mars. 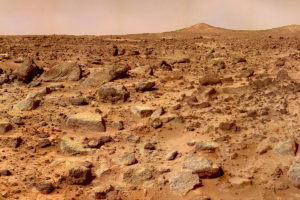 28. Mars has the biggest and most violent dust storms in the entire Solar System. The storms often have winds topping 125 miles per hour, can last for weeks, and can cover the entire planet. They usually occur when Mars is closest to the Sun.

29. It’s home to Hellas, which is a vast and featureless plain that cover 1,300 miles. It was created by asteroids crashing into the planet’s surface nearly 4 billion years ago.

30. Mars’ moon Phobos, or Fear, rises in the west and sets in the east twice a day. Deimos, or Panic, on the other hand, takes 2.7 days to rise in the east and set in the wet. The moons are named after the twin gods that accompanied Ares into battle. 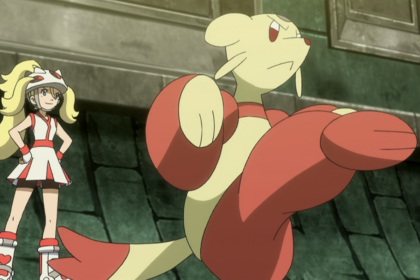