The Sound of Music is a 1965 American musical drama movie produced and directed by Robert Wise, and starring Juliet Andrews and Christopher Plummer, with Richard Haydn and Eleanor Parker. Take a look below for 30 more fun and fascinating facts about The Sound of Music.

1. The Sound of Music is an adaption of the 1959 stage musical of the same name, composed by Richard Rodgers with lyrics by Oscar Hammerstein II.

2. The movie’s screenplay was written by Ernest Lehman, adapted from the stage musical’s book by Lindsay and Crouse.

3. Charmian Carr who played Liesel and was 21 at the time, wrote in her autobiography that she was attracted to the 35 year old Christopher Plummer, who played her father. Plummer admitted that the feeling was mutual, but insists that it didn’t get beyond flirtation.

4. When Maria is running through the courtyard to the Von Trapp house in “I Have Confidence”, she tripped. This was an accident; however, director Robert Wise liked it so much that he kept it in the movie. 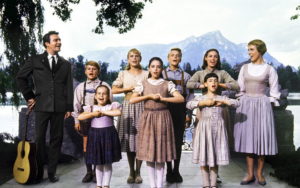 6. Julie Andrews had to learn how to play the guitar, especially for the movie.

7. When Maria and the Captain are at the gazebo, Julie Andrews couldn’t stop laughing due to a lighting device that was making, in her words, a “raspberry” every time she leaned in to kiss Plummer.

8. Christopher Plummer admits on the DVD commentary that he was drunk during the shooting of the music festival sequence.

9. Adjusted for inflation, The Sound of Music would be the third highest-grossing movie of all time.

10. Julie Andrews nearly turned down the role of Maria Von Trapp, fearing that the character was too similar to her role in Mary Poppins.

11. The Sound of Music is credited as the movie that saved Twentieth Century Fox, after the failure of Cleopatra.

12. Debbie Turner had many loose teeth during filming. When they fell out, they were replaced with false teeth. 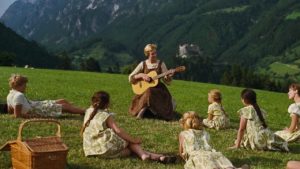 13. Although Christopher Plummer’s own vocals were recorded, it was subsequently decided that he should be dubbed.

14. Christopher Plummer admitted that he ate and drank heavily during filming to drown out his unhappiness with making the picture, and he found plenty of opportunities to do both in Austria. His costume eventually had to be refitted for his extra weight.

15. When The Sound of Music was first released on home video, it stayed on the charts for over 250 weeks.

16. The song “Edelweiss” was written for the musical and is little known in Austria. The song was the last that Oscar Hammerstein II wrote before his passing in 1960.

17. In real life, Georg Von Trapp was not stern. The Von Trapp children were upset and disturbed by the portrayal of their father in the movie. Maria von Trapp requested that director Robert Wise soften the character of her husband, but Wise refused.

18. At the beginning of the movie, Heather Menzies-Urich was about three inches taller than Nicholas Hammond. He had to wear heel lifts to make himself look taller. 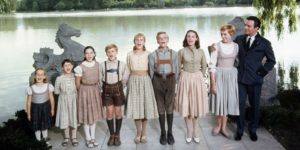 19. Maria never uses the Captain’s first name, Georg, in the movie. Instead, she calls him Captain, Sir and Darling.

20. Nicholas Hammond has brown hair and had to undergo several painful hair bleachings before and during filming to make his hair blonde.

21. Six burly Austrians were hired to pull the heavy car by two ropes while the actors push from behind when the Von Trapps are escaping their home in Salzburg.

22. When The Sound of Music was released in South Korea, it did so much business that some theaters were showing it four and five times per day. One theater owner in Seoul tried to figure out a way to be able to show it even more often, in order to bring in more customers, so he cut out all the musical numbers.

23. Christopher Plummer opted out of the Harry Palmer role in The Ipcress File in favor of the Captain Von Trapp part, which he later regretted.

24. According to the British tabloid The Sun, The Sound of Music was selected by BBC executives to be broadcast after a nuclear strike, to improve the morale of survivors. The BBC didn’t confirm or deny the story, saying, “This is a security issue so we cannot comment.”

25. Robert Wise didn’t get alone with the real Maria Von Trapp when she came to the set, calling her bossy. 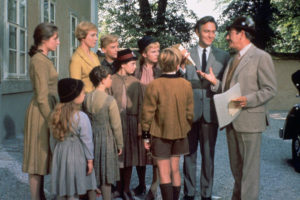 26. The United States Library of Congress selected The Sound of Music for preservation in the National Film Registry in 2001.

27. The Von Trapps did escape Austria as the Nazis came to power, but they didn’t flee over the Alps, they got on the train to Italy and then traveled to America, where they had a concert tour scheduled. The day after they left, Hitler ordered the Austrian borders shut.

28. When they left Austria, Baron Von Trapp and Maria had already been married for years and had two children of their own, with another on the way.

29. When the real Von Trapps came to America they settled in Stowe, Vermont. They opened the Trapp Family Lodge, which is operational to this day.

30. Grace Kelly was considered for the part of the Baroness. However, she had retired from acting when she married Prince Rainier of Monaco and was not open to offers to return. 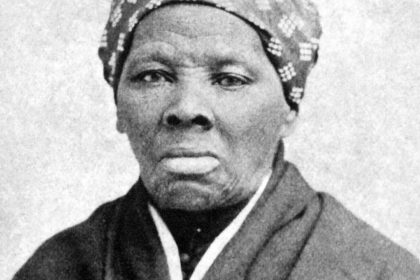 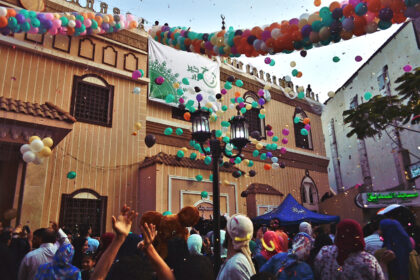 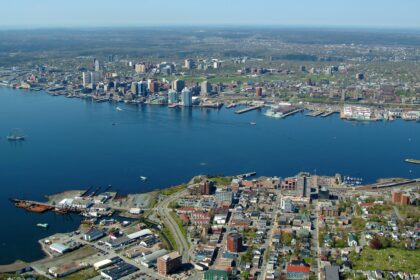