1. Andy and Red’s opening conversation in the prison yard, in which Red is pitching a baseball, took about 9 hours to shoot. Morgan Freeman pitched the baseball for the entire 9 hours without any complaint. He showed up the next day for work with his arm in a sling.

2. Even though the movie was a very modest hit in theaters, it become one of the highest grossing video rentals of all time.

3. The mugshots of a young looking Morgan Freeman that were attached to his parole papers are actually pictures of Morgan’s younger son, Alfonso Freeman.

4. Alfonso Freeman had a cameo in the movie as a con shouting, “Fresh fish! Fresh fish today! We’re reeling ’em in!”

5. Even though it’s never directly mentioned in the movie, allegedly, Brooks is in prison for murdering his wife and daughter after having a losing streak in poker. 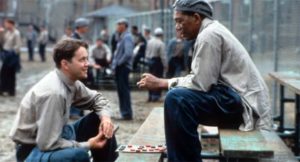 7. Clint Eastwood, Harrison Ford, Paul Newman and Robert Redford were all considered for the part of Red. In the original novella, Red is a middle aged Irishman with graying red hair. However, Frank Darabont always pictured Morgan Freeman for the role because of his authoritative presence, demeanor and deep voice.

8. Frank Darabont watched Goodfellas every Sunday while shooting his movie and drew inspiration from it. He especially liked using voice-over narration and showing the passage of time.

9. Jeff Bridges, Tom Hanks, Kevin Costner, Tom Cruise, Nicolas Cage, Johnny Depp and Charlie Sheen were all considered for the part of Andy Dufresne. Hanks turned it down because of his commitment to Forrest Gump and Costner was committed to filming Waterworld.

10. One of the reasons why the full title of the Stephen King novella wasn’t used was because there was a perception in Hollywood that the movie was actually going to be a biopic of Rita Hayworth.

11. Clancy Brown said that he received several offers from real life corrections officers to work with him in order to make the portrayal of Captain Hadley more realistic. However, he turned them all down because Hadley was meant to be an evil character and he didn’t want to misrepresent actual corrections officers.

12. At the end of the movie, there’s a dedication to Allen Greene. Greene was Frank Darabont’s agent and a close personal friend. He died before the movie was completed due to AIDS.

13. After the movie gained popularity, Ted Turned sold the television rights to TNT, which is his own network, for a much lower than normal price for such a well known movie. Due to how cheap it is to show, the film is broadcast on TNT very often. 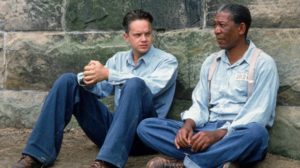 14. In the closeup of Andy’s hands loading the revolver in the opening scenes, the hands are actually those of Frank Darabont. Later on in the movie, while Andy carves his name into his cell wall, it’s also Darabont’s hands that are used for the shot. The closeups were filmed during post production and then inserted because Darabont felt that only he could do exactly when he wanted in the closeups.

15. The movie’s initial gross of $18 million couldn’t even cover the cost of production. It did another $10 million after the Oscar nominations but it was still considered a box office flop.

16. The American Humane Association monitored the filming of scenes involving Brooks’ crow. During the scene where he fed it a maggot, the AHA objected that this was cruel to the maggot and required the crew to use a maggot that had died from natural causes. After one was found, the scene was filmed.

17. Stephen King said that his original novella was a culmination of all the memories that he had from watching prison movies when he was a kid.

18. The voiceover narration for The Shawshank Redemption was recorded before filming began. It was then played on set to dictate the rhythm of each scene.

19. For the sewage tunnel sequence, Tim Robbins initially refused to immerse himself in the muddy water at the end of the pipe, after a chemist tested the water and said that it was lethal.

20. Mansfield locals were eager to be extras but many weren’t available during the day due to work and others were only available for one day. Because of this, most of the extras were found at a halfway house and some of them are real ex-cons.

21. Stephen King sold the rights to his novella for $5,000, but he never cashed the check. Years after The Shawshank Redemption came out, he got the check framed and mailed it back to Darabont with a note that said, “In case you ever need bail money. Love, Steve.” 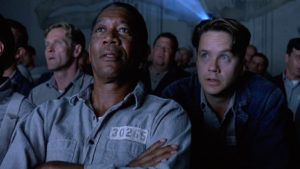 22. The prison where the movie was filmed is located in the flightpath of C-130 Hercules aircraft of the 179th Airlift Wing, Ohio Air National Guard, which caused all sorts of sound problems.

23. The man sitting behind Gil Bellows on the bus is Dennis Baker, a former warden of the Ohio State Reformatory, which is where the primary filming took place.

24. The movie was released in Taiwan as 1995: Fantastic. Many viewers thought that it would be an action movie and not a prison drama.

25. The character, Andy Dufresne, had a cameo appearance in Apt Pupil, which is another Stephen King novella. Andy handled the investments for Dussander, who was a Nazi in hiding.

26. To prepare for his role as Andy Dufresne, Tim Robbins actually spent some time in solitary confinement.

27. James Whitmore was cast in the part of Brooks because he was one of Frank Darabont’s favorite character actors.

28. Even though Red traffics in and is often seen with packs of cigarettes, as he’s seen giving packs to Heywood, Brooks Hatlen and Laundry Leonard, he’s never himself seen smoking in the movie. 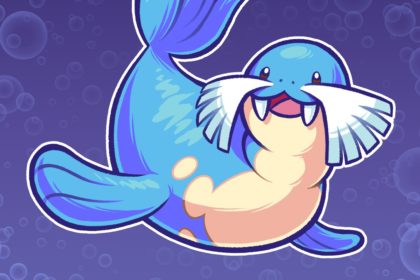 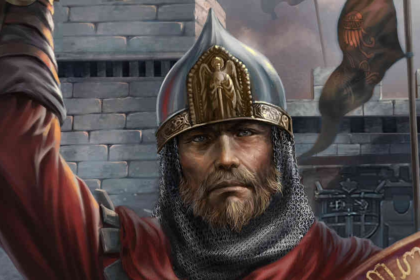 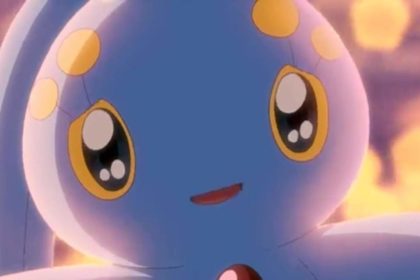