Some Like It Hot is a 1959 American romantic comedy film set in 1929, directed and produced by Billy Wilder, starring Marilyn Monroe, Tony Curtis, and Jack Lemmon. The supporting cast includes George Raft, Pat O’Brien, Joe E. Brown, Joan Shawlee, and Nehemiah Persoff. Take a look below for 28 more fun and interesting facts about Some Like It Hot.

2. Despite Marilyn Monroe’s contract requiring color film, she agreed to film in black and white after seeing that Curtis and Lemmon’s makeup gave them a “ghoulish” appearance on color film.

3. Some Like It Hot opened to largely positive reviews and is today considered to be one of the greatest films of all time. 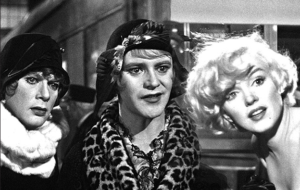 7. The movie is notable for featuring cross dressing, and for playing with the idea of homosexuality, which led to its being produced without approval from the Motion Picture Production Code.

8. The overwhelming success of Some Like It Hot is considered one of the final nails in the coffin for the Hays Code.

9. Tony Curtis has said that he asked Billy Wilder if he could imitate Cary Grant for his stint as the millionaire in the movie. Wilder like it and they shot it that way. Apparently, Grant saw the parody of himself and stated, jokingly, “I don’t talk like that.”

11. On its original release, Kansas banned Some Like It Hot from being shown in the state, explaining that cross-dressing was, “too disturbing for Kansas.” 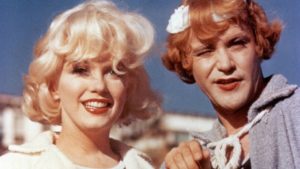 12. A preview audience laughed so hard after Daphne’s announcement of the engagement to Osgood, that a lot of the dialogue was missed. It was re-shot with pauses added to allow for this.

14. The resort scenes were filmed entirely at the Hotel Del Coronado in San Diego, California. One reason why Billy Wilder chose this location was Marilyn Monroe’s ongoing personal problems. He wanted a location where she could live on site and not have to be transported.

16. According to Jack Lemmon, George Raft spent hours teaching him and Joe E. Brown how to tango.

17. Tony Curtis hated that his own performance deteriorated over the course of the 30 or more takes often needed to get a good scene out of Marilyn Monroe. As a result, Billy Wilder ended up having to use more footage of Marilyn than him.

18. Tony Curtis based the persona of Josephine on his mother, Grace Kelly and Eve Arden. 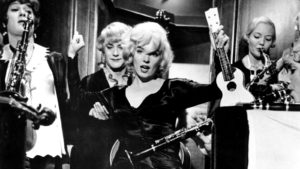 19. The movie’s working title was “Not Tonight Josephine.”

20. The movie was adapted into a Broadway musical called “Sugar”, which opened at the Majestic Theater on April 9th, 1972, and ran for 505 performances.

21. Tony Curtis and Jack Lemmon, who had to kick off their shoes and soak their painful feet the second Billy Wilder said “Cut,” were usually forced to stand around in painful high heels for long periods while Marilyn Monroe tried to get her lines right.

22. Tony Curtis had been going to analysis as much as four times per week for several years. When the time came for him to appear on the set in drag for the first time, Jack Lemmon had to take him by the hand and literally pull him out of his dressing room.

23. Marilyn Monroe consented to appear in the movie only after production executive Harold Mirisch offered her 10% of the gross.

24. Billy Wilder wasn’t happy with Tony Curtis’ falsetto voice as Josephine and had it re-dubbed in a recording studio. 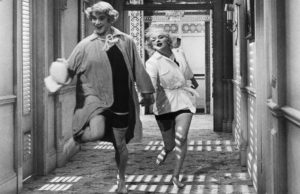 25. Some Like It Hot is the only non-Best Picture nominee for the year to be nominated for Best Adapted Screenplay.

26. The exterior shots of the train station were filmed at the MGM studio in Culver City, as one of their then-standing sets was that of a train station. It was deemed cheaper to rent the use of that then to build one at the Goldwyn Studio. What was left of the station can be seen in Fred Astaire’s introduction sequence in 1974’s “That’s Entertainment!”

27. According to I.A.L. Diamond, Billy Wilder offered Jack Lemmon the role of Jerry, and Lemmon gave him a verbal agreement to appear in the movie, despite being under contract to Columbia Pictures. 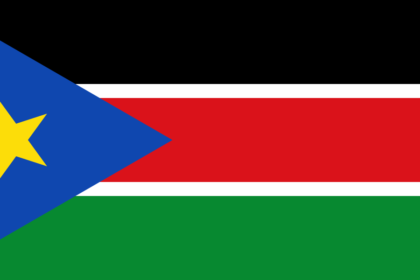 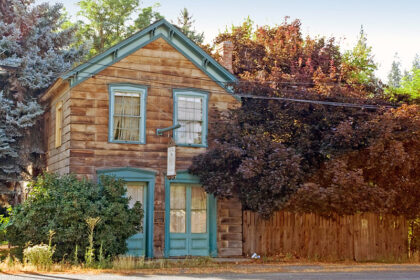