Amadeus is a 1984 American period drama movie directed by Milos Forman, adapted by Peter Shaffer from his stage play Amadeus. The story, which is set in Vienna, Austria, during the latter half of the 18th century, is a fictionalized biography of Wolfgang Amadeus Mozart. Take a look below for 28 more fun and fascinating facts about Amadeus.

1. Mozart’s music is heard extensively in the soundtrack of the movie.

2. The movie was nominated for 53 awards and received 40, which included 8 Academy Awards, 4 BAFTA Awards, 4 Golden Globes, and a Directors Guild of America award.

3. As of 2016, it is the most recent movie to have more than one nomination in the Academy Award for Best Actor category.

4. Several professor of music stated that, after studying all of the musical keys struck on pianos throughout Amadeus, that not one key is struck incorrectly when compared to what is heard at the exact same moment.

5. Only four sets needed to be built: Salieri’s hospital room, Mozart’s apartment, a staircase, and the vaudeville theater. All other locations were found locally. 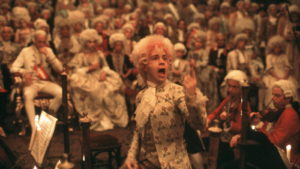 6. When shooting the scene in which Salieri is writing down the death mass under Mozart’s dictation, Tom Hulce was deliberately skipping lines to confuse F. Murray Abraham, in order to achieve the impression that Salieri wasn’t able to fully understand the music being dictated.

7. In one scene, Mozart refers to Christoph Willibald Gluck as “boring” and says, “I don’t like” George Frideric Handel. However, Gluck and Handel were two of Wolfgang Amadeus Mozart’s favorite composers.

8. F. Murray Abraham learned to read and conduct music for his role.

9. The performance of “Don Giovanni” in the movie was filmed on the same stage where the opera first appeared.

11. The young boy that Mozart smiles at in the party scene as he plays the piano is supposed to be the young Beethoven.

12. Milos Forman insisted that his lead actors retain their American accents so that they could concentrate on their characters and performance instead. 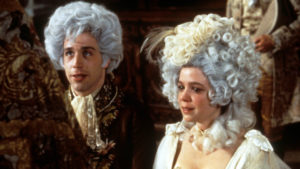 13. Tom Hulce said that he based Mozart’s distinctive, obnoxious laugh on a very famous director he worked with, who laughed in an identical manner.

15. Prague, Milos Forman’s native city, was ideal as a stand-in for Vienna, as modern television antennas, plastic and asphalt had rarely been introduced under Communist rule.

16. Amadeus was entirely shot with natural light. In order to get the proper diffusion of light for some scenes, the directors covered windows from the outside with tracing paper.

17. The portrait of Leopold Mozart seen in the movie, while made to look like Roy Dotrice, is based on and has a very close resemblance to a real portrait of Wolfgang Amadeus Mozart’s father. The original is in the care of the Mozarteum Foundation in Salzburg.

18. Sets and costumes for the operatic productions were based on sketches of the original costumes and sets used when the operas premiered.

19. Amadeus ironically helped spark a revival of Salieri’s music, which had previously languished in obscurity.

20. F. Murray Abraham was in the make-up chair for an average of 4.5 hours each day he played the old age Salieri.

21. Neville Marriner had less than an hour to commit to the project as he was in between connecting flights at New York when he met with Milos Forman and Saul Zaentz. Marriner agreed to do it on the proviso that not one note of Wolfgang Amadeus Mozart’s music be changed.

22. Throughout the entire movie, all German is translated to English and all Italian is left as Italian. This was done to help viewers better immerse themselves in the time that was Classical Era Austria.

23. The soundtrack of Amadeus made #56 in the Billboard album charts, making it one of the most successful classical music albums ever.

24. Peter Shaffer broke down in tears when he first visited the Prague opera house, knowing that Wolfgang Amadeus Mozart himself had performed there. 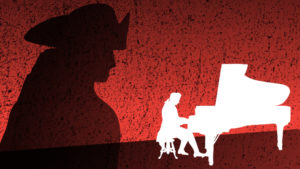 25. Mel Gibson, Mick Jagger, Sam Waterston and Tim Curry all auditioned for the role of Mozart.

26. Since the movie wasn’t financed by a major studio, Orion Pictures promoted the movie with a music video featuring David Lee Roth and cuts of Bruce Springsteen, Van Halen, KISS, Michael Jackson, David Bowie, and Madonna dancing along to Mozart’s “Symphony No. 25 in G minor.”

27. Originally, a very young Kenneth Branagh was cast as Mozart, but Milos Forman changed his mind and decided to go with American actors for the principal roles.

28. The Emperor tells off the young Mozart proposing marriage to his sister, Antoinette. This was the Mario Antoinette who was executed by guillotine during the French revolution. 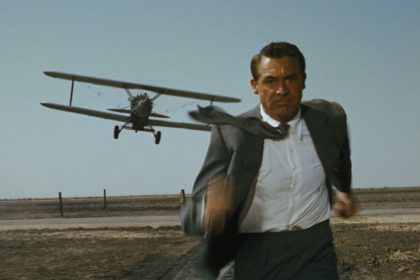 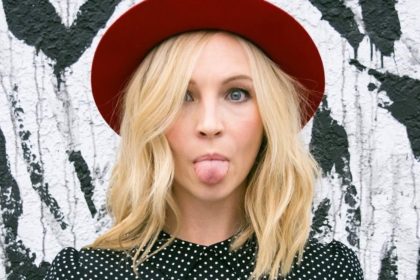