The Girl With A Pearl Earring is an oil painting by the 17th century Dutch painter Johannes Vermeer. Researchers believe that the painting was created in 1665 and is a type of work called a “tronie.” Tronies were paintings that focused on the face of a subject with some added element of fantasy or an exaggerated expression that differentiates them from portraits. Take a look below for 25 more fun and fascinating facts about the Girl With A Pearl Earring painting.

1. The girl in the painting is believed to be Vermeer’s oldest daughter, Maria, who was about 12 or 13 years old at the time.

2. The painting is regarded as Vermeer’s masterpiece and is often called the Mona Lisa of the North or the Dutch Mona Lisa.

3. The painting captures the viewers and makes them believe that they have caught her attention and caused her to turn her head. It gives off a sensual feeling with the girl gazing at the viewer with wide eyes and a parted mouth, giving her an air of mystery.

5. The Girl With A Pearl Earring is 1 of over 40 paintings of women that Vermeer created. Researchers have argued that because of this, it’s obvious that he had a keen interest in women’s socio-cultural roles.

6. The painting has been in the collection of the Mauritshuis in the Hague since 1902. 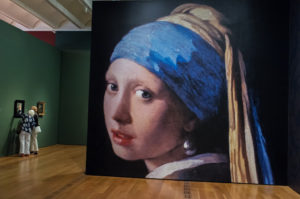 7. In 2014, Dutch astrophysicist Vincent Icke raised doubt about the material of the earring and argued that it looked more like polished tin than pearl, on the grounds of the specular reflection, the pear shape and the large size of the earring.

8. More than 200 years passed between the time the painting was painted and when it was sold at auction in 1881.

9. The painting was sold to a Dutch Army officer and art collector Arnoldus Andries des Tombe. He bought the painting for 2 huilders with a 30 cent premium. Upon his death in 1902, the work was willed to the Hague’s art museum, the Mauritshuis, where it’s still located today.

10. The Mauritshuis has loaned the painting to Japan, Italy and the United States for exhibitions.

11. The worldwide tour ended in July, 2014, and the museum announced that the painting would stay in their collection within their walls indefinitely.

12. Speculation on the identity of the girl in the painting led to a novel, movie and a stage production. They were all titled Girl with a Pearl Earring and they began with American novelist Tracy Chevalier, whose 1999 historical novel spun a lover story between Vermeer and a servant girl turned muse.

13. In 2004, Chevalier’s book was adapted into an acclaimed feature film, starring Scarlett Johansson and Colin Firth. In 2008, a stage adaption was produced in London.

14. Researchers have argued that the story doesn’t make sense because, as historian J.M. Montias suggested, a household servant did model for Vermeer’s Milkmaid painting, but not for this one.

15. In 2014, Benjamin Binstock, whose a specialist on Renaissance and Baroque art, noted that Maria, Vermeer’s daughter, may have been more than just Girl With A Pearl Earring’s model; she might also have been the artist who created other works that were attributed to her father. 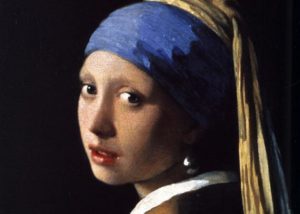 16. Some of the works that Maria might have created include Mistress and Maid, Girl With a Red Hat and Woman with a Lute. In each piece, the model is wearing the familiar earring.

17. When the painting toured the United States in 2013, it drew a massive turnout at each of its stops. People believe that it’s due to the mysterious stories and uncertainties that surround the painting.

18. Some scholars believe that the Girl With A Pearl Earring may be a portrait of chastity, making a connection between the painting and the teachings of early 17th century bishop St. Francis De Sales, who wrote extensively about the connection between pearl earrings and chastity.

19. The similar pearl earring was seen in Vermeer’s A Woman Brought A Letter By A Maid. He often reused props, models and settings in his works so it quite possible that it’s the exact same earring.

20. Modern restorations of the painting found small amounts of indigo and weld, a mixture that would have made the dark underpainting glisten. However, over the centuries, the pigments in the glaze must have broken down.

21. The paint used to paint the turban was very expensive. It was made from a crushed deep blue semi-precious stone called lapis lazuli. The ultramarine paint that Vermeer used on the turban was rarely used by any of his contemporaries. 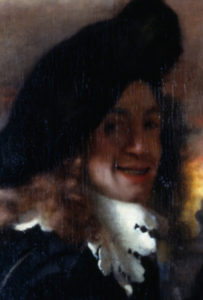 22. Even though the ultramarine had a high price tag, Vermeer used it in times of financial hardship. This was probably due to funding from his generous patron Pieter van Ruijven.

23. Vermeer may have used mechanical means to make this painting. A camera obscura is the current popular theory and in the 2013 documentary, Tim’s Vermeer, it showed an experiment that seemed to prove that Vermeer’s method included a careful arrangement of mirrors to guide his hand while painting.

24. The Girl With A Pearl Earring appears in the 2007 movie “St. Trinian’s”, when a group of unruly school girls steal it to raise funds to save their school.

25. English street artist, Banksy, recreated the painting as a mural in Bristol, replacing the pearl earring with an alarm box and calling the artwork the Girl With A Pierced Eardrum. 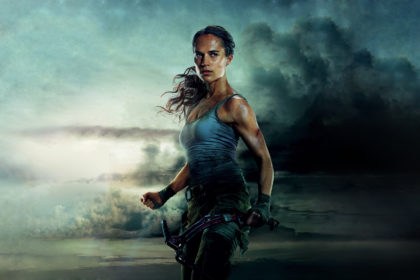 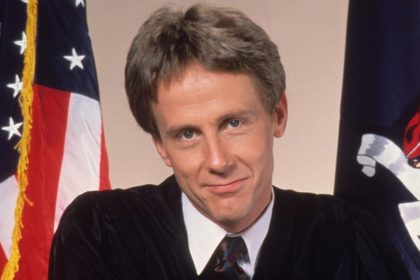