The Matrix is a 1999 science fiction action movie written and directed by The Wachowskis and starring Keanu Reeves, Laurence Fishburne, Carrie-Anne Moss, Hugo Weaving and Joe Pantoliano. The movie depicts a dystopian future in which reality, as perceived by most humans, is actually a simulated reality called “the Matrix,” created by sentient machines to subdue the human population, while their bodies’ heat and electrical activity are used as an energy source. Take a look below for 30 more interesting and fascinating facts about The Matrix.

1. The Matrix is known for popularizing a visual effect known as “bullet time,” in which the heightened perception of certain characters is represented by allowing the action within a shot to progress in slow-motion while the camera’s viewpoint appears to move through the scene at normal speed.

2. The movie contains numerous references to philosophical and religious ideas, and prominently pays homage to works such as Plato’s Allegory of the Cave, Jean Baudrillard’s Simulacra and Simulation and Lewis Carroll’s Alice’s Adventures in Wonderland.

3. The Matrix grossed over $460 million and won four Academy Awards, as well as other accolades, including BAFTA Awards and Saturn Awards.

4. The movie appeared in many greatest science fiction movies lists and, in 2012, it was added to the National Film Registry for preservation. 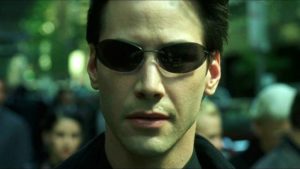 5. After the lobby shoot-out, the camera pans back, showing the aftermath of the gunfight. During this, a piece of one of the pillars falls off. This happened by coincidence during the filming, and wasn’t planned, but was left since it seemed appropriate.

6. Carrie-Anne Moss twisted her ankle while shooting one of her scenes, but decided not to tell anyone until after filming so they wouldn’t re-cast her.

8. For the cell phone conversation scene between Neo and Morpheus in the MetaCortex office, Keanu Reeves actually climbed up the window without a stuntman, which was 34 floors up.

9. In the first 45 minutes of the movie, Neo has 80 lines. 44 of these lines are questions, just over half of his total dialogue, averaging at roughly one question per minute.

10. The studio insisted on a great deal of explanatory dialogue, as they described the screenplay as, “the script that nobody understands.”

11. According to Costume Designer Kym Barrett, Trinity’s costume was made with cheap PVC, because of the much tighter budget. Similarly, Neo’s coat wasn’t actually a very expensive fabric. It was a wool blend purchased for three dollars a yard. 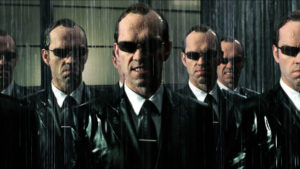 12. In Greek Mythology, Morpheus is the god of dreams. This is somewhat ironic, considering Morpheus’ role in the Matrix was to awaken people from their dream states to reality.

13. In the combat training program before Neo starts his furious attacks on Morpheus, he rubs his nose with his thumb and finger, similar to a mannerism of Bruce Lee before he attacks his opponents. The move was improvised by Reeves.

14. For Keanu Reeve’s scene set in the real world at the start of the movie, his costumes were deliberately shabby and ill-fitting, to suggest Thomas Anderson’s feeling of not quite fitting into the world.

15. The glyphs on the computer screens, with the exception of the call traces, consists of reversed letters, numbers, and Japanese katakana characters.

16. Laurence Fishburne stated that once he read the script, he didn’t understand why other people found it confusing. However, he had a doubt if the movie would ever be made, because it was, “so smart.”

17. The filming of the helicopter scene nearly caused the movie to be shut down, because they flew the helicopter through restricted Sydney airspace. Laws in New South Wales, Australia were changed to allow filming to proceed. 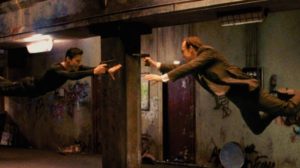 18. According to The Wachowskis, all animals in the Matrix universe are computer generated images.

19. All the color blue was sucked out of the exterior shots to convey how grim the world of the Matrix actually is.

20. When Carrie-Anne Moss saw the first cut, it was also the first time that she’d ever seen herself in a movie before.

21. Before his character’s final speech at the end, Keanu Reeves never has more than five sentences in a row to speak.

22. To prepare for the scene in which Neo wakes up in a pod, Keanu Reeves lost 15 pounds, and shaved his whole body to give Neo an emaciated look.

24. By the middle of 2002, the famous “bullet time” sequence has been spoofed in over 20 different movies.

25. The last thing shot was Neo getting flushed into the lake when he gets unplugged for the first time. 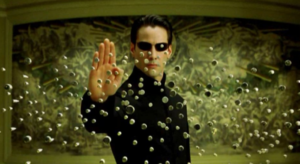 26. Many sets of identical twins were cast as extras in the “Woman in Red” scene, in which Morpheus takes Neo through a computer simulation of the Matrix, to create the illusion of a repeating program.

29. In an online interview when the movie was first released, The Washowskis revealed that they’d both take the Blue Pill when given Neo’s choice.

30. Carrie-Anne Moss performed the shots featuring Trinity at the beginning of the movie and all the wire stunts herself. 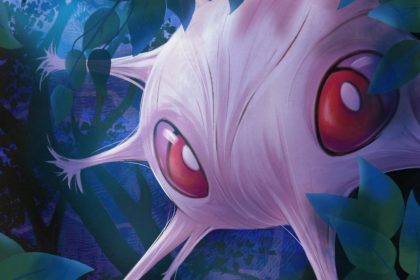 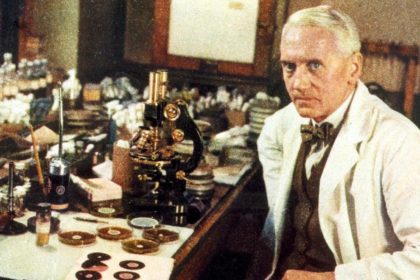 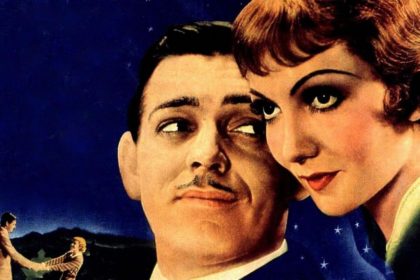