There are 3 known species of goldfinch in the world. The first is the European goldfinch, followed by the widespread American goldfinch and Lawrence’s goldfinch, which can be found in south-west United States. Take a look below for 24 more fun and weird facts about goldfinches.

1. Young goldfinches don’t have the red face that the adults are known for. They’re usually have a greyish face, which is why they’re often known as grey pates.

2. European goldfinches were introduced to both Australia and New Zealand over 100 years ago. They still have a thriving population there.

3. Their popularity as a cage bird in Victorian Britain led to big numbers being trapped to supply the demand, causing their population to crash.

4. The population eventually rebounded when the Society for the Protection of Birds, which later became the RSPB, halted the caging of goldfinches.

5. They were usually trapped by birdlime, clap nets and spring loaded cages using a decoy.

7. A group of goldfinches is called a “charm,” and it’s derived from the old English word “c’irm,” which describes the birds’ twittering song. 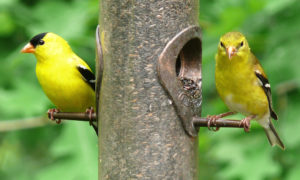 8. They have a few old rural names, such as goldie, gold linnet, redcap and King Harry.

9. Thistle finch, which was another widely used name for goldfinches in the past, reflects the bird’s favorite food.

10. Their scientific name, Carduelis carduelis, comes from the Latin word for thistle, “carduus.”

11. Goldfinches appear a lot in medieval paintings of the Madonna and Child, which reflects the bird as a symbol of fertility and resurrection.

12. In the early 18th century, the word “goldfinch” was used as slang for a very wealthy person.

13. Male goldfinches have longer beaks than females. This allows them to eat teasels, something that the females don’t even attempt.

14. Though their diet primarily consists of seeds, during springtime, they will eat small insects such as aphids.

15. They like to build their nests on outer twigs at the end of a branch. They usually look for fruit trees when building their nests.

16. They’re known to breed with greenfinches in the wild. However, in captivity, they have been successfully bred with canaries, bullfinches and serins.

18. European goldfinches are migratory birds, and are known to fly to the Mediterranean for the winter. 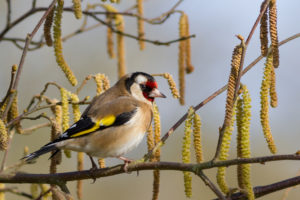 21. American goldfinches have a bright yellow and black cap.

22. They’re the only member of the finch family that sheds off all its feathers twice a year, including during breeding season.

23. During mating season, female American goldfinches are easily detectable because they’ll be the ones zigzagging in the sky while being chased by the males.

24. American goldfinches are extremely acrobatic; they’re known for eating upside down from a sunflower one moment and then eating standing upright the next. This ability with their foot and bill allows them to access food sources that would otherwise be inaccessible. 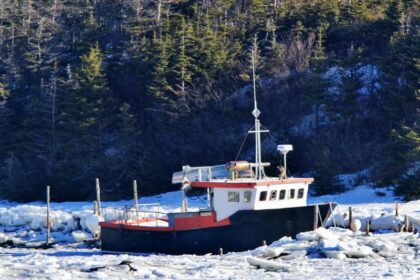 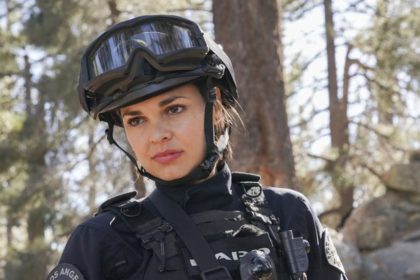