2. The settlement began in the early 1870s, as a service center for the surrounding ranches.

4. The U.S. Postal Service had a preference for one-word names, so name of the post office was “Lonerock”, which eventually became the community’s official name.

6. The first settlers to the area arrived in 1871. The Lonerock area, in a valley cut by a small stream, was lush with grasses, and the surrounding hills abounded with game animals.

7. In 1874, Edward Wineland erected a water-powered sawmill at Lonerock, which allowed construction and settlement to thrive – a post office was established in 1875.

8. In 1878, the area’s Native Americans began pushing back on the intruding settlers, causing many to flee to The Dalles.

9. The US Army was called on to protect the remaining inhabitants, and by 1882 the area was secured and the town was incorporated, one of the county’s first.

10. Postmaster RG Robinson was elected mayor of the new government.

11. In 1888, a two-room school building was erected, and 1-12 grade education was provided. The school’s final graduation was in 1932. In 1898, Reverend Deuse joined the community and built a Methodist church that held weekly services for many years. As of 2020, the church still stands, and occasionally holds services.

12. The small white church has become as iconic to the Lonerock community as the rock itself.

13. In July 1896, the town was almost destroyed by fire. The entire business portion burned and only a few dwellings were left on the outskirts of town. The blaze was reportedly started by a boy playing with matches.

14. By 1900, the town’s population stood at 68; new settlers were arriving and several businesses operated within its limits. Many of the surrounding homesteads had become successful ranches and farms that occupied thousands of acres on the surrounding hillsides. A varied economy was arising, including hunting for sport, fishing, and winter sledding.

15. An annual rodeo, held on the middle of Main Street, became a popular event, attracting participants and spectators from the surrounding area. By the 1920s, rodeos in the surrounding areas grew larger and Lonerock’s annual rodeo was no longer the main attraction; its final year was 1934. The economy also declined as businesses and activities migrated to larger settlements in the area. The town’s population shrank by nearly half from 1930 to 1940. 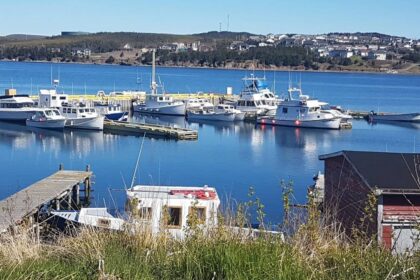