Saturn is the sixth planet from the Sun and the second biggest planet in the Solar System, right after Jupiter. This gas giant has an average radius that’s 9 times that of Earth. It has only one eighth the average density of Earth, but with its bigger volume, Saturn is over 95 times bigger. Take a look below for 31 more fun and interesting facts about the planet Saturn.

1. Saturn is the fifth brightest object in the Solar System and it’s also easily studied through binoculars or a small telescope.

2. Saturn was known to ancient civilizations, including the Babylonians and Far Eastern observers.

3. It’s named after the Roman God Saturnus, and it was known to the Greeks as Cronus.

4. Saturn is the flattest planet in the Solar System. Its polar diameter is 90% of its equatorial diameter, which is due to its low density and fast rotation.

5. The planet turns on its axis once every 10 hours and 34 minutes, giving it the second shortest day of any other planet in the Solar System.

6. Saturn orbits the Sun once every 29.4 Earth years. It’s slow movement against the backdrop of stars earned it the name of “Lubadsagush” from the Ancient Assyrians. The name means “oldest of the old.” 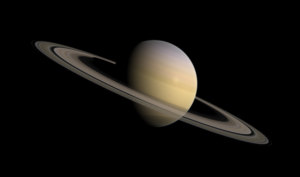 7. Its upper atmosphere is divided into bands of clouds. The top layers are mostly ammonia ice and below them, the clouds are largely water ice. Below that are layers of cold hydrogen and sulfur ice mixtures.

8. Saturn has oval shaped storms similar to Jupiter’s. The region around its north pole has a hexagonal shaped pattern of clouds which scientists think could be a wave pattern in the upper clouds.

9. There is a large vortex over its South Pole that resembles a hurricane like storm.

10. Saturn is made mostly of hydrogen which exists in layers that get denser father into the planet. Deep inside Saturn, the hydrogen becomes metallic and, at the core, lies a hot interior.

11. Saturn has the most extensive rings in the Solar System. The rings are made mostly of chunks of ice and small amounts of carbonaceous dust. The rings stretch out more than 120,700 kilometers from the planet, but are only 20 meters thick.

12. The planet has 150 moons and smaller moonlets. They are all frozen, with the largest moons being Titan and Rhea.

13. Enceladus, one of Saturn’s moons, has an ocean below its frozen surface.

14. Titan has a complex and dense nitrogen rich atmosphere. It’s made up mostly of water, ice and rock. Its frozen surface has lakes of liquid methane and landscapes covered with frozen nitrogen. Scientists believe that Titan might have some form of life, but not Earth like life.

15. Four spacecraft have visited Saturn and they are the Pioneer 11, Voyager 1 and 2, and the Cassini-Huygens. 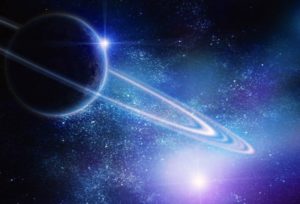 16. Even though Saturn’s rings weren’t discovered until the 1600s, some scholars believe that ancient cultures may have known about them. For example, the Maori in New Zealand have historically referred to Saturn as Parearau, which is an ancient name that means, “surrounded by a headband.”

18. Storms on Saturn can last for months of even years. A long lived 2004 storm on Saturn, called the “Dragon Storm,” created massive lightning 1,000 times more powerful than the lightning on Earth.

19. In early 2010, amateur astronomers found a massive ammonia blizzard raging on Saturn. The storm was five times larger than the snowstorm that shut down Washington D.C., in February, 2010.

20. The Assyrians, who lived in modern-day Iraq, were the first to record seeing Saturn in 700 B.C. They called the planet the Star of Ninib, after the Assyrian sun god of spring.

21. As the seventh day of the week, Sunday is named after Saturn, the farthest of the seven objects in the solar system known in ancient times.

24. The geysers on Enceladus not only feed the rings around Saturn but also may contain the ingredients for life.

25. More so than any other planet in the Solar System, Saturn’s weather is determined by the conditions deep in the planet rather than by the Sun. This is mostly because Saturn is so far away from the Sun and it generates heat internally.

27. The average temperature of Saturn is -178 degrees Celsius.

28. Because Saturn spins on a tilt, it has seasons. However, summer on Saturn lasts about 8 Earth years.

29. Though it was once thought that they formed around the time of the dinosaur,s information gathered from the Cassini probe suggests that Saturn has had its rings throughout its history.

30. Since Saturn is so far from the Sun, the Sun would appear 10 times smaller when viewed from Saturn than it does from Earth. On average, Earth receives 90 times more sunlight than Saturn.

31. Galileo Galilei was the first person to see Saturn through a telescope in 1610. He thought that the rings looked like ears and were handles or moons. In a secret anagram to Kepler, Galileo wrote that he had discovered that the highest planet was triple bodied.