Earth is the third planet from the Sun and the only objects in the universe that is known to harbor life. According to radiometric dating and other sources of evidence, Earth formed over 4 billion years ago. Take a look below for 31 more fascinating and interesting facts about the planet Earth.

2. Earth’s axis of rotation is tilted, producing season variations on the planet’s surface.

3. The gravitational interaction between the Earth and Moon causes ocean tides, which stabilizes the Earth’s orientation on its axis, and gradually slows its rotation.

4. Earth is the densest planet in the Solar System and the largest of the four terrestrial planets.

5. Earth’s lithosphere is divided into several rigid tectonic plates that migrate across the surface over many millions of years.

6. About 71% of the Earth’s surface is covered with water, mostly by oceans. The remaining 29% is land consisting of continents and islands that together have lakes, rivers and other sources of water that contribute to the hydrosphere. 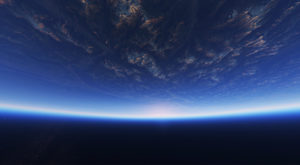 7. The majority of Earth’s polar regions are covered in ice, including the Antarctic ice sheet and the sea ice of the Arctic ice pack.

8. Earth’s interior is active with a solid iron inner core, a liquid outer core that generates the Earth’s magnetic field and a convecting mantle that drives plate tectonics.

9. Within the first billion years of Earth’s history, life appeared in the oceans and began to spread to the Earth’s atmosphere and surface, leading to the proliferation of aerobic and anaerobic organisms.

10. There is some geological evidence which shows that life could have arisen as much as 4.1 billion years ago.

11. Since the very first instances of life, the combination of Earth’s distance from the Sun, its physical properties, and its geological history, have allows life to evolve and thrive.

12. In its history, biodiversity has gone through long periods of expansion while also occasionally punctuated by mass extinction events.

13. Over 99% of all species that have ever lived on Earth are extinct, however, humans are the first known intelligent species that might be able to survive a large extinction event.

14. Estimates of the number of species on Earth today vary widely because most species have not even been discovered yet alone described.

15. Over 7.6 billion humans live on Earth and depend on its biosphere and natural resources to survive and thrive.

16. The modern English word Earth, came from a wide variety of Middle English forms, which derived from an Old English noun most often spelled as “eoroe.” 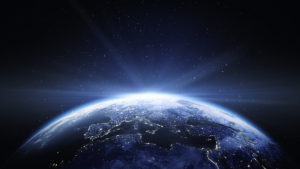 17. As with Terra and Gaia, Earth was a personified goddess in Germanic paganism. The Angles were listed by Tacitus as among the devotees of Nerthus, and later Norse mythology included Joro, a giantess often given as the mother of Thor.

18. Originally, earth was written in lowercase, and from early Middle English, its definite sense as “the globe” was expressed as “the” earth. By Early Modern English, many nouns were capitalized and “the earth” became “the Earth.”

19. Earth’s atmosphere and oceans were formed by volcanic activity and outgassing that included water vapor.

20. The origin of the planet’s oceans was condensation augmented by water and ice delivered by asteroids, protoplanets and comets.

21. Atmospheric greenhouse gases kept the oceans from freezing when the newly forming Sun had only 70% of its current luminosity.

22. By 3.5 billion years ago, Earth’s magnetic field was established, which helped prevent the atmosphere from being stripped away by the solar wind.

23. Chemical reactions led to the first self-replicating molecules about 4 billion years ago. A half billion years later, the last common ancestor of all life arose.

24. The evolution of photosynthesis allowed the Sun’s energy to be harvested directly by life forms such as plants. The resulting molecular oxygen accumulated in the atmosphere and formed a protective ozone layer in the upper atmosphere.

25. Earth’s expected long term future is closely tied to that of the Sun. Over the next 1.1 billion years, solar luminosity will increase by 10%, and over the next 3.5 billion years, it will increase by 40%. This massive increase in luminosity will make life almost impossible on Earth, not even mentioning the fact that the Earth’s orbit will eventually decay due to tidal effects and cause it to enter the Sun’s atmosphere and be vaporized. 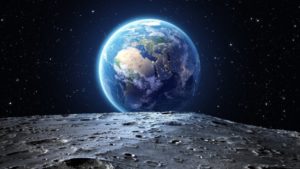 26. The Moon may have dramatically affected the development of life on Earth by moderating the planet’s climate. Paleontological evidence and computer simulations show that the Earth’s axial tilt is stabilized by tidal interactions with the Moon.

27. The most widely accepted theory of the Moon’s origin, the giant impact hypothesis, states that it formed from the collision of a Mars sized protoplanet called Theia earlier in the Solar Systems history.

28. As of June, 2016, there were 1,419 operational, human made satellites orbiting Earth. There are also inoperative satellites, including Vanguard 1, which is the oldest satellite currently in orbit, and over 16,000 pieces of tracked space debris.

30. Human cultures have developed many views of the planet. For example, Earth is sometimes personified as a deity and in many cultures, it’s a mother goddess that’s also the primary fertility deity.

31. The perception of Earth shifted dramatically in the 20th century when humans first viewed it from orbit, especially so with photographs of Earth that were returned by the Apollo program.