Piri Reis, also known as Ahmed Muhiddin Piri, was an Ottoman admiral, navigator, geographer, and cartographer. He is primarily known today for his maps and charts collected in his “Book of Navigation.” Take a look below for 30 more strange and interesting facts about Piri Reis.

1. He gained fame as a cartographer when a small part of his first world map, prepared in 1513, was discovered in 1929 at the Topkapi Palace in Istanbul.

2. His world map is the oldest known Turkish atlas showing the New World, and one of the oldest maps of America still in existence anywhere.

3. Reis’ map is centered on the Sahara at the latitude of the Tropic of Cancer.

4. In 1528, Reis drew a second world map, of which a small fragment, showing Greenland and North America from Labrador and Newfoundland in the north to Florida, Cuba, Hispaniola, Jamaica and parts of Central America in the south, still survives.

5. According to his imprinting text, he had drawn his maps using about 20 foreign charts and mappae mundi including one by Christopher Columbus. 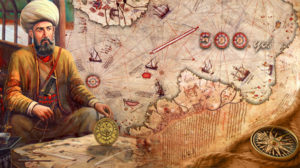 6. His identity remained unknown for years.

8. Reis’ place of birth was either that of his father’s, Karaman, the then capital city of Beylik of Karaman located in central Anatolia and annexed in 1487 by the Ottoman Empire, or Gelibolu, situated in the Eastern Thrace in the European area of Ottoman Turkey.

9. Both his father’s name, Haci Mehmed Piri, and his full name, Hajjii, are informal and honorary Islamic titles.

10. The fact that both Reis and his father have the same full name suggests that they both completed the annual Islamic pilgrimage to the holy city of Mecca.

11. Reis followed the footsteps of his uncle Kemal Reis, a renowned seafarer, corsair and admiral of the Ottoman Navy, and got himself involved in government supported privateering in 1481. 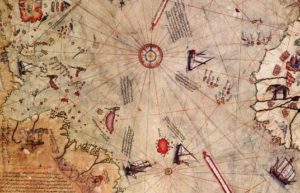 14. In 1511, his uncle died when his ship, heading to Egypt, was destroyed in the Mediterranean Sea amidst a storm.

15. Following the death of his uncle, Reis went back to Gelibolu and turned his focus on studying navigation.

16. In 1513, Reis compiled a world map, from military intelligence, which is centered on the Sahara.

18. Only about one third of the world map could be retrieved today.

19. The portion of the map sketched on gazelle skin parchment was unearthed through German theologian Gustav Adolf Deissmann’s philological work in Istanbul’s Topkapi Palace on October 9, 1929. 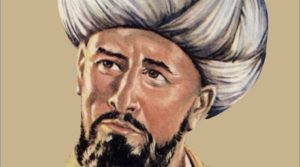 20. The surviving part of Reis’ map shows North Africa, western coasts of Europe and details of the eastern coast of South America.

21. He inscribed on the map that its basis was around 20 charts and mappae mundi, including a map by Christopher Columbus stating, “these lands and islands are drawn from the map of Columbus.”

22. He went back to the sea as a ship captain of the Ottoman fleet and participated in the second major conflict between the Ottoman Empire and the Egypt-based Mamluk Sultanate during 1516 and 1517.

23. In 1521, his “Book of Navigation” was published, comprising specific data on navigation and precise charts of those times outlining significant cities and ports of the Mediterranean Sea.

25. His revised book was gifted to the Ottoman Emperor Suleiman the Magnificent, and it comprised 290 maps with a total of 434 pages. 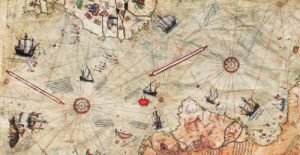 26. He took part in the second attempt of the Ottoman Empire to expel the Knights of St. John from Rhodes in the Siege of Rhodes.

27. Reis remained the captain of the ship that sailed Grand Vizier of Ottoman, Pargali Ibrahim Pasha, to Egypt in 1524.

28. Reis drew a second world map in 1528, the surviving portion of which was unearthed by Director of the Topkapi Palace Museum, Tahsin Oz, while searching for the missing portions of Piri’s 1513 map.

29. In 1547, he was promoted to the military rank of “Reis” that is Commander of the Ottoman Fleet in the Indian Ocean.

30. On February 26, 1548, he fought against the Portuguese and succeeded in capturing the harbor of Aden in Yemen, therefore, marking recapturing of Aden by the Ottomans.