Cardinal Armand Jean du Plessis, 1st Duke of Richelieu and Fronsac, was a French clergyman, nobleman, and statesman. He was consecrated as a bishop in 1607 and was appointed Foreign Secretary in 1616. Take a look below for 30 more strange and interesting facts about Cardinal Richelieu.

1. Richelieu rose in both the Catholic Church and the French government, becoming a cardinal in 1622, and King Louis XIII’s chief minister in 1624.

2. He remained in office until his death in 1642; he was succeeded by Cardinal Mazarin, whose career he had fostered.

3. He was often known by the title of the king’s “Chief Minister” or “First Minister.”

5. By restraining the power of the nobility, he transformed France into a strong, centralized state. 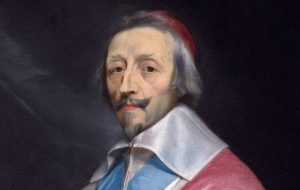 6. His chief foreign policy objective was to check the power of the Austro-Spanish Habsburg dynasty, and to ensure French dominance in the Thirty Years’ War that engulfed Europe.

7. Although he was a cardinal, he didn’t hesitate to make alliances with Protestant rulers in attempting to achieve his goals.

8. While a powerful political figure, events like the Day of the Dupes show that in fact he very much depended on the king’s confidence to keep his power.

9. As alumnus of the University of Paris and headmaster of the College of Sorbonne, he renovated and extended the institution.

10. Richelieu was also famous for his patronage of the arts; most notably, he founded the Academie francaise, the learned society responsible for matters pertaining to the French language.

11. Richelieu is known by the sobriquet “the Red Eminence,” from the red shade of a cardinal’s clerical dress and the style “eminence” as a cardinal.

12. As an advocate for Samuel de Champlain and of the retention of New France, he founded the Compagnie des Cent-Associes and saw the Treaty of Saint-Germain-en-Laye return Quebec City to French rule under Champlain, after the settlement had been taken by the Kirkes in 1629. 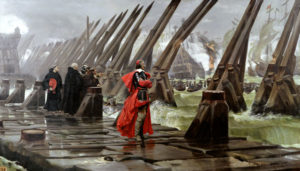 13. Richelieu has been depicted in popular fiction frequently, most notably as a leading character in Alexandre Dumas’s novel “The Three Musketeers” and its numerous film adaptions.

15. He was fragile and frequently fell sick since his childhood and throughout his life.

16. His father, a courtier and a soldier, served as the grand provost of the chief magistrate under Henry III.

17. His maternal grandfather was a councilor of the Parliament of Paris.

18. His father died fighting the French Wars of Religion when Richelieu was five years old. The family faced financial crisis, which was overcome through royal aids.

19. When he was 9 years old, he attended the College of Navarre in Paris and studied philosophy following which he took training for a carer in the military. 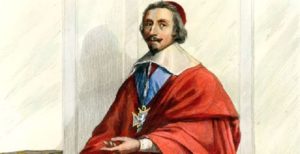 21. His family was made the bishopric of Lucon by King Henry III in recognition of his father’s service in the French Wars of Religion.

22. In 1606, he was nominated by King Henry IV for the position of Bishop of Lucon, but as he was short of the required age, he traveled to Rome to receive special dispensation from the Pope.

24. Richelieu was instrumental in implementing institutional reforms mentioned by the Council of Trent during 1545 to 1563, therefore, becoming the first ever French Bishop to do so.

25. He levied land tax and salt tax to raise funds for the French army. Most of it fell on the poor, who raised a revolt during 1636 to 1639, but were overpowered by Richelieu violently.

26. He was successful in converting the Thirty Years War from a dispute between Catholics and Protestants to that between nationalism and Habsburg hegemony following the defeat of Habsburg. 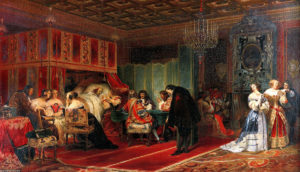 27. Richelieu helped in establishing French colonies in New France including Compagnie de la Nouvelle France and encouraged integration of the natives in the colonial society.

28. At later stages of his life, he became a target of several plots including that of his protegee Henri Coiffier de Ruze, marquis de Cinq-Mars. However, Cinq-Mars was arrested and executed.

29. He died on December 4, 1642, after suffering from several ailments. He was buried at the church of the Sorbonne.

30. His corpse was taken out at the time of the French Revolution when his mummified head was stolen.