1. Her father, Jon Voight, is also an actor. Angelina made her screen debut as a child alongside her father in “Lookin’ to Get Out.”

2. Before she got into acting, she was into modeling. She started modeling when she was 14 years old.

3. She’s naturally blonde but her mother dyed her hair dark when she was young. Jolie has kept dying it darker ever since.

4. When Angelina Jolie was young, she was fascinated with death and told everyone that she wanted to be a funeral director when she grew up.

5. Growing up, her favorite animals were reptiles. She had a lizard and a few snakes.

6. In one interview, Jolie said that she believed that by thinking about death all the time, she can appreciate her life much more than most people do. 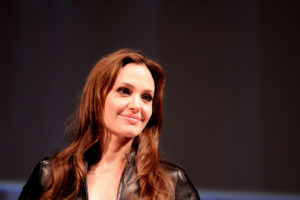 7. She has a vast knife collection.

8. In 1996, she got married to Jonny Lee Miller. At the wedding, she wore black leather pants and a white shirt, with Jonny’s name in her own blood on the back of the shirt. When she was asked why she did it, she said, “I wanted to make it special.” They were married for 3 years.

10. She played Lara Croft in Tomb Raider in 2001. She ended up doing all of her own stunts and even sustained some minor injuries while on set.

12. In 2004, she got her pilot’s license, which allows her to fly small private planes. She has a Cirrus SR22 that she flies on occasion.

13. After her debut in Hackers, she’s been getting parts in movies every single year. She even starred in up to 5 movies in a single year.

14. She has an “H” tattooed on her wrist to symbolize her brother, James Haven. Her other tattoos are the Japanese Kanji symbolizing “Death,” a dragon, a cross, and various Native American symbols. She also has a quote from Tennessee Williams that says, “A prayer for the wild at heart, kept in cages.”

15. Jolie and her brother Haven didn’t have a good relationship with their dad, which is why they dropped their last names for “Jolie” and “Haven.” They’ve also been photographed kissing on the lips and hanging all over one another in public.

16. In 2001, she married Billy Bob Thornton. They wore necklaces with each other’s blood around their necks. However, they divorced 2 years later. 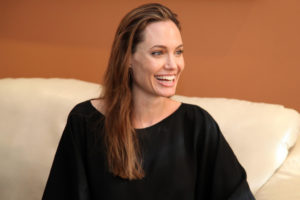 17. Angelina Jolie has been voted multiple times in magazines all over the world as being one of the most beautiful and sexy women on the planet, including Esquire’s Sexiest Woman Alive in 2004.

18. Even though she’s been married twice, she said in an interview that Brad Pitt was the first man that she truly fell head over heels for.

19. Jolie and Pitt had a total of 6 kids together. Their oldest child, Maddox, was adopted when Jolie was still married to Billy Bob. 3 of their kids are adopted from around the world, and 3 are their biological children.

20. Their first biological daughter, Shiloh, was born in Namibia, Africa, as that’s where Jolie was at the time.

21. The United Nations named Angelina Jolie as a Goodwill Ambassador for multiple countries. She was also the first person the United Nations Correspondents Association ever gave the “Citizen of the World” award to.

22. Because of her work in Cambodia, in 2005, the King of Cambodia made her an official citizen of the country.

23. her mother, Marcheline Bertrand, passed away due to ovarian cancer in 2007.

24. In 2013, she was told by doctors that she carried a rare gene that would almost guarantee that she would have breast cancer some day. She had a double mastectomy in order to make sure that she would never have the chance of getting it.

25. She struggled with depression, drug addiction and self harm tendencies. It was only after adopting 7 month old Maddox from an orphanage in Cambodia on March 10, 2002, that she found stability in her life. 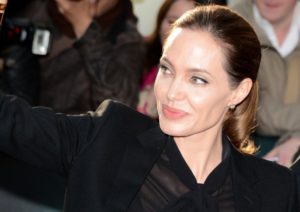 26. She had an obsessive crush on Dr. Spock from Star Trek.

27. The tattoo on her left shoulder blade was done by a Thai artist using a hammer and a foot and half long needle.

28. She doesn’t like being hugged. In an interview with London’s Mail she said, “Growing up, I had a thing about people hugging me, even my mother, I’m holding my breath now just talking about it.”

29. She’s the only A-lister in Hollywood who doesn’t have a publicist to represent her and her PR activities.

30. Angelina Jolie and Brad Pitt sold the rights for the first images of their twins to People and Hello! magazines for $14 million, making them the most expensive celebrity pictures ever taken. All of the money went to the Jolie-Pitt Foundation.