Cameroon is located on the Gulf of Guinea and is a Central African country of varied terrain and wildlife. Its inland capital, Yaounde, and its biggest city, the seaport Douala, are transit points to ecotourism sites as well as beach resorts like Kribi, which is near the Chutes de la Lobe waterfalls. Take a look below for 30 more interesting and fascinating facts about Cameroon.

2. There are more than 1,700 different linguistic groups in the country. The official languages of Cameroon are French and English, however, there are 230 other languages spoken in the region.

4. The country receives a lot of rainfall every year, making it one of the wettest places on Earth. 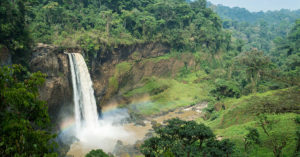 5. Due to its geographical and cultural diversity, it’s often referred to as “Africa in miniature” and as “the hinge of Africa.”

6. Thermal springs can be found all throughout the country.

7. Oil exports contribute 40% towards the total export earnings of Cameroon.

8. In the early 2000s, scientists found strong evidence that HIV originated from chimpanzees in a southeastern corner of Cameroon. They speculate that a human first acquired the virus in 1908 while killing an infected chimpanzee for bushmeat.

9. The forest in Korup National Park is Africa’s oldest remaining forest at over 60 million years old. The forest have over 1,000 known species, including 90 species of plants with medicinal value. One such plant, Ancistrocladus korupensis, may be able to fight HIV and cancer.

10. Waza National Park is the most visited park in Cameroon, allowing visitors to see lions, hippos, monkeys, giraffes, buffalo, elephants and other animals.

11. Cameroon has more than 1,000 species of butterfly, which is a quarter of all species found in Africa. 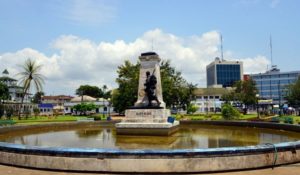 13. The goliath frog is the biggest frog in the world and is only found in Cameroon and Equatorial Guinea. The frog weighs about the same as a domestic house cat and it reaches up to a foot long.

14. Cameroon has a large population of Christians and Muslims, but 40% of Cameroonians still practice traditional religions and many believe in witchcraft. For example, the Baba village hired a witch hunter in 2001 after believing that an outbreak of meningitis, which was responsible for an average of 10 deaths per week, was the work of witches and wizards.

16. Mount Cameroon is also the only active volcano in the country. It last erupted in 2012. There are about 500,000 people living near the volcano in three main towns of Limbe, Buea, and Muyuka.

17. Before World War I, the vast majority of the country was a German colony. At that time, it was known as Kamerun.

18. The area was called “Rio dos Camaroes” by Portuguese explorers after their arrival on the coast in the 15th century. 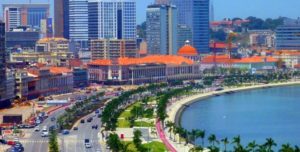 20. In 1990, Cameroon became the first Africa country to enter the quarter-final of the FIFA World Cup.

21. As per the Council on Foreign Relations of the U.S. State Department, Cameroon has been ranked as the second most dangerous country in the world, mainly because of attacks and kidnappings that were orchestrated by the terrorist group Boko Haram. The groups name translates to, “Western education is sinful.”

22. In some Cameroonian tribes, diviners are thought to have special skills to divine supernatural aspects of life. Spider diviners create small shrines with symbolic cards at the entrance of earth spider burrows. Upon tempting the spider out with bait, a diviner determines a person’s fortune by reading the cards based on how the spider disrupts their arrangement.

23. The oldest inhabitants of Cameroon are thought to be the Baka, which are a tribe of hunter-gatherers living in the forests. Because they’re 4’9” tall on average, the Baka are often mislabeled as Pygmies.

24. The Bamileke of Cameroon exhume and honor the skulls of their ancestors with singing and dancing two years after the initial burial. They believe that the skulls hold the ancestral spirit, which has the power to bring good or bad fortune. The skulls are often kept close to family members, such as inside the floor of the home. 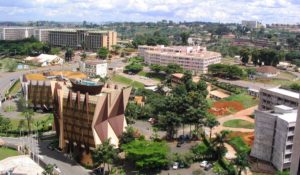 25. The Fulani of Cameroon practice an initiation ceremony that involves lashing young boys with sticks to leave distinctive scarring to show that they have come of age.

26. During the 18th century, Cameroon and Nigeria‘s coasts were hubs for the African slave trade. About 20,000 men and women were taken from their shores each year.

27. Three out of four Cameroonians live on and work their own land. Cameroon provides 90% of its own food. Being self-sufficient is one of the reasons why Cameroon is more economically stable than many of the other countries in Africa.

29. In September, 2012, Cameroon’s Prime Minister Marafa Hamidou Yaya was jailed for embezzling $29 million for a down payment on a presidential plane.

30. Cameroon is the only country in the world named after a crustacean. In 1472, Portuguese explorer Fernando Po named the country “Rio dos Camaroes,” which means “River of Prawns” after he saw the immense number of shrimp in the country’s Wouri river.