During the final days of World War II, the United States detonated two nuclear bombs over the Japanese cities of Hiroshima and Nagasaki on August 6 and August 9, 1945. The United States had dropped the bombs with the consent of the United Kingdom as outline in the Quebec Agreement. The bombings killed about 129,000 people, the majority of which were civilians. These bombings remain the only time when nuclear weapons were used in warfare. Take a look below for 30 more interesting and fascinating facts about the bombings of Hiroshima and Nagasaki.

1. Before dropping the bombs, the United States Air Force dropped pamphlets in Hiroshima, warning people of the upcoming bombing.

2. For decades after the bombings, the mayor of Hiroshima, Tadatoshi Akiba wrote letters of protest every time a nuclear test was conducted, as a plea to end the use of nuclear weapons.

3. After the first Hiroshima bombs went off, one Hiroshima policeman went to Nagasaki to teach the police about ducking after the atomic flash. As a result of his warning, no policeman died in Nagasaki’s atomic blast.

4. The Flame of Peace in Hiroshima has burned since 1964 in honor of the victims. It will be extinguished only when all nuclear weapons are removed from the world and the Earth is free from nuclear threat.

5. In 1945, a man naed Tsutomu Yamaguchi survived the blast at Hiroshima, dragged himself into an air-raid shelter, spent the night there, and then caught a train in the morning so he could arrive at his job on time in Nagasaki, where he survived another atomic blast. 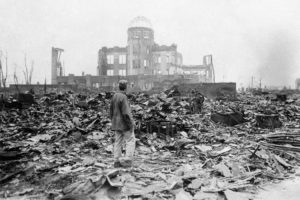 6. The olender is the official flower of Hiroshima because it was the first thing to bloom after the explosions.

7. There were 12 cyanide pills kept in the cockpit of the Enola Gay, which was the plane carrying the first atomic bomb, and pilots were instructed to take them if the mission was compromised during the bombing of Hiroshima.

8. Only 3 of the 12 people on board the Enola Gay actually knew the purpose of their mission to Hiroshima.

9. After the bombing of Hiroshima, hundreds of people went to Nagasaki searching for shelter. Of these, 165 managed to survive both bombings.

10. An American made bank vault managed to save the contents from the atomic bombing of Hiroshima. After the bank was reconstructed, the new manager sent a congratulatory letter to the vault manufacturer.

11. Hiroshima is one of the only places outside the United States to observe Martin Luther King Day because he wrote a letter to Japan weeks before his death, requesting to visit the country and spread his message of peace.

12. In 1976, Japan donated 53 bonsai trees to the United States for its bicentennial, including a white pine that had been tended daily since 1625 and managed to survive the Hiroshima atomic blast. It’s history wasn’t known until 2001 when two brothers showed up at the museum to check on their grandfather’s tree.

13. There was a three day Go championship game happening in Hiroshima when the city was nuked. The building was damaged and several spectators were injured, by the game continued normally after a lunch break and finished at the end of the day.

14. The design for “Little Boy,” which was the first atomic bomb dropped on Hiroshima, was never field tested before being used. The scientists were so confident in the design that they believed one was enough. 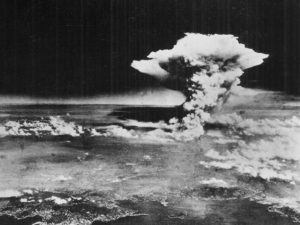 15. Allied carpet bombing of Tokyo killed more civilians than the atomic bombing of both Nagasaki and Hiroshima combined.

16. About 20 Americans were killed by the atomic bomb in Hiroshima. This wasn’t acknowledged by the United States government until the 1970s.

17. Jimmy Carter is the only American president to have visited Hiroshima’s ground zero.

18. Bernard Waldman, an American physicist, flew on the atomic bombing of Hiroshima to try and record the explosion for research. However, he forgot to open the camera shutter and didn’t manage to record anything.

19. A month after the nuclear bombing of Hiroshima, a massive typhoon called Makurazaki Typhoon, hit the city, killing 2,000 people.

20. When the atomic bomb was dropped on Hiroshima, the intensity of the blast was so strong that it permanently burned shadows of people and objects into the ground.

21. In 1945, Japanese radar operators detected a small number of incoming United States planes, one of which carried the bombs, but decided not to intercept as the small number of planes weren’t seen as a threat.

22. The Gingko Biloba species of tree is 270 million years old and it rarely suffers disease or insect attack. It was one of the only living things left in Hiroshima after the bombing. The trees managed to heal very quickly and are still alive today.

23. It took Tokyo about 3 hours to realize that Hiroshima has been bombed.

24. The Japanese army planned to have every man, woman and child fight the United States to the death after Hiroshima. They even attempted a coup after the Emperor surrendered. 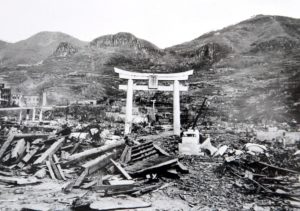 25. The closest known survivor of the Hiroshima bombing was in a basement only 170 meters, or 560 feet, from ground zero.

26. After the bombing of Hiroshima, there were “ant-walking alligators” that the survivors saw everything. They were men and women who, “were now eyeless and faceless with their heads transformed into blackened alligator hides displaying red holes, indicating mouths.”

27. The amount of matter that was converted to energy in the atomic bomb dropped on Hiroshima was about 700 milligrams, which was less than one third the mass of a United States dime.

28. Some Hiroshima survivors grew black fingernails, which were rod shaped fingernails that had active blood vessels and bled profusely when they broke off.

30. During World War II, Kyoto was spared from the bombings by Henry L. Stimson, who was the sitting United States Secretary of War who had admired the city when he went on his honeymoon a few decades earlier. Stimson managed to replace Kyoto for Nagasaki.