President John F. Kennedy was assassinated on Friday, November 22, 1963, at 12:30 PM in Dallas, Texas, while riding in a presidential motorcade in Dealey Plaza. He was riding with his wife Jacqueline, Texas Governor John Connally, and Connally’s wife, Nellie. He was fatally shot by former United States Marine Lee Harvey Oswald. Take a look below for 30 more interesting and fascinating facts about the assassination of John F. Kennedy.

1. On November 11, 1963, President Kennedy laid a Veterans Day wreath at the Tomb of the Unknown Soldier in Arlington National Cemetery. He would be buried at the cemetery exactly 2 weeks later.

2. Jacqueline Kennedy rarely travelled with John on political trips, but decided to fly with him to Texas on November 21, 1963.

3. Kennedy would likely have survived the assassination if he wasn’t wearing a back brace. The brace kept him in place after being shot the first time, letting Oswald take a second shot to his head.

4. A month before being killed, Kennedy created a fake James Bond home movie that depicted his own shooting.

5. Kennedy survived a previous assassination attempt 2 months before his inauguration. He was targeted by Richard Pavlick who was a 73 year old man that hated Catholics. He planned to crash his dynamite filled car into Kennedy while he was vacationing in Palm Beach. However, he changed his mind when he saw Kennedy with his wife and child.

6. Both Kennedy and Abraham Lincoln were shot in the head on a Friday. Their assassins were both Southern and they were both succeeded by Southern presidents. 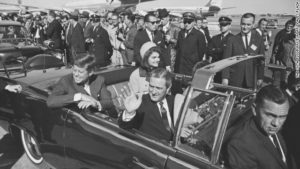 7. The assassination of John F. Kennedy led to the first and only time a woman swore in a United States president. Lyndon B. Johnson was sworn in by Sarah T. Hughes, who was a federal judge from Texas that was appointed by Kennedy.

8. 6 months before the assassination, Oswald tried to kill retired Army general Edwin Walker with the same gun he killed Kennedy with. Walker was a far right political activist who was dismissed from the military by the Kennedy administration.

9. According to a poll taken the week after Kennedy was killed, 90 million citizens admitted to having had cried.

10. Jackie Kennedy refused to take off her pink Chanel outfit that was stained with her husband’s blood. She told Lady Bird Johnson, “I want them to see what they have done to Jack.”

11. Jackie Kennedy removed her wedding ring and put it on her husband’s finger to be buried with him. Later on, she had an aide retrieve it for her.

12. Her suit has never been cleaned and still lies in the National Archives. The suit will not be seen in public until at least 2103, according to Kennedy family wishes.

13. The day before he shot Oswald, Jack Ruby stole a chicken dinner from a television crew out of a television truck parked outside the Dallas police department.

14. Oswald’s murder by Jack Ruby on November 24 was the first homicide caught on live television.

15. Police Captain Will Fritz, who led the interrogation of Lee Harvey Oswald, had been a part of the squad that hunted Bonnie and Clyde in 1934.

16. The Texas School Book Depository’s sixth floor, where Oswald had positioned himself for the shooting, is today a museum dedicated to Kennedy’s assassination. 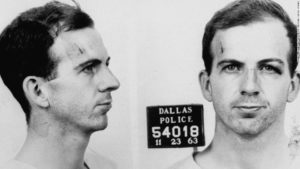 17. Oswald was a self-described Marxist who tried to defect to Russia in 1959. At the time, the assassination of a president wasn’t a federal offense and Oswald would have been tried in Texas.

18. Dallas businessman Abraham Zapruder caught the assassination on his 8 millimeter home movie camera. His secretary then urged him to go home and get it for the presidential parade. His short movie was later bought by Life magazine for $150,000.

20. In Washington, dignitaries from more than 100 countries came for Kennedy’s funeral. At the time, this was the biggest gathering of its kind on United States soil.

21. About 250,000 people came to pay their respects to Kennedy as he lay in state in the Capitol Rotunda. Tens of thousands were turned away with some having waited throughout a near freezing night in a line that stretched for more than 2 miles.

22. Even though Jackie Kennedy would eventually remarry, she chose to be buried next to Kennedy. Two of their kids, an infant son and daughter, are also buried next to their parents.

23. After the funeral, Jackie Kennedy met privately with 3 heads of state. They were Charles de Gaulle of France, Eamon de Valera of Ireland and Haile Selassie of Ethiopia.

24. Two former building owners of the Texas Schoolbook Depository both claim to own the window that Oswald shot through.

25. The 1961 Lincoln Continental four door convertible, code named the X-100, that Kennedy died in was overhauled, cleaned and returned after the assassination. It went on to transport presidents until it was retired in 1977. 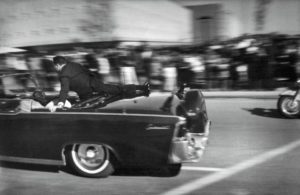 26. All 3 of the major television networks at the time, CBS, NBC and ABC, suspended their shows for 4 days to focus exclusively on coverage of the assassination.

27. Lee Harvey Oswald was arrested in the Texas Theatre while he was watching the movie War is Hell!

28. During World War II, Kennedy had an affair with Inga Arvad, a woman who was rumoured to have been personally sent by Adolf Hitler to spy on the United States.

29. In order to alleviate his back pain, Kennedy hired Dr. Max “Feel Good” Jacobson, who was a physician without a license, to inject him with 10 to 15 milligrams of amphetamines as often as twice a week.

30. Had Kennedy lived, United States troops might have left Vietnam earlier than planned. A month before his was killed, he approved a plan to withdraw 1,000 U.S. military personnel by 1963.

11 Interesting And Awesome Facts About Minecraft