Giant pandas live for approximately 20 years, however, captive pandas are known to live between 25 to 30 years due to better living conditions. The eyespots in a panda cuba are initially shaped like a circle, but as they grow, the circle becomes shaped like a teardrop. Take a look below for 30 more interesting and cute facts about giant pandas.

1. Pandas have been a symbol of peace in China for hundreds of years. For example, warring tribes in China would raise a flag with an image of a panda on it to stop a battle or to call a truce.

2. They have been on the endangered species list since 1990. Their most significant threats are habitat loss and poaching.

5. Pandas can stand upright but their short hind legs aren’t strong enough to support their large bodies. Their bones are also twice heavier than the bones of an animal of the same size.

6. According to legend, the panda was once an all white bear. When a small girl tried to save a panda cub from being attacked by a leopard, the leopard killed the girl instead. Pandas came to her funeral wearing armbands of black ashes and as they wiped their eyes, hugged each other, and covered their ears, they smudged the black ashes. These ashes ended up staying on their bodies forever. 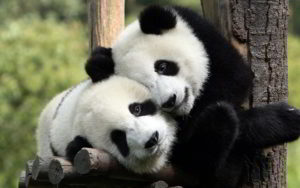 7. Pandas aren’t able to run fast, in fact, a slow trot is as fast as they can go. This is completely opposite of bears, who are able to run 35 miles per hour.

8. They’re pigeon toed, which means that they walk with their front paws turned inward.

9. They rely heavily on spatial memory to locate a mate’s home range and their preferred patches of bamboo.

12. There are about 240 captive pandas in the world and they’re all part of a breeding program to try and bring their numbers back up.

13. The cat bear, or the Ailurarctos, is the ancestor of the giant panda; it lived 8 million years ago. Research has shown that for the past 3 million years, giant pandas have evolved as a separate lineage from other bears.

14. They have plantigrade feet, which means that their entire foot touches the ground when walking, which is very similar to humans, other bears and rodents.

15. The majority of newborn pandas die from diseases or from being accidentally crushed by their mothers.

16. Captive pandas give birth to twins more often than female pandas in the wild. 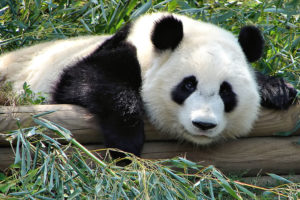 17. Giant panda cubs are usually born in August or September. They’re the size of a stick of butter. It has pink skin, a thin coat of white fur, a long tail and no teeth; its eyes are also closed. By the end of the first month, the panda offspring gets all of its spots. Its eyes open when its about 4 to 6 weeks old. By the time they’re 2 months old, they’re the size of an average human newborn baby.

21. Even though a panda’s fur looks silky and soft, it’s actually thick and wiry. Their hair can grow up to 4 inches, or 10 centimeters, long.

23. Their throats have a special lining that protect it from bamboo splinters.

24. They have 42 teeth and, like humans, they only have two sets of teeth in their lifetime. 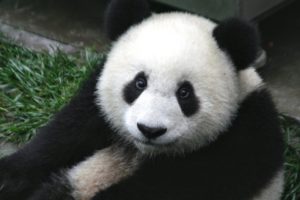 26. After Richard Nixon visited China in 1972, he received two pandas from the Chinese leader, Chairman Mao. The two pandas, Ling-Ling and Hsing-Hsing, were placed in the National Zoo in Washington D.C. More than 1 million people visited them during their first year there.

27. A lot of the food that a panda eats doesn’t get digested. An adult giant panda in the spring can produce about 62 pounds of feces in 24 hours.

28. The first giant panda ever to be born in captivity was born in a Beijing zoo in 1963.

29. The panda’s face is so massive because it has big cheek muscles. It’s jaw and cheek muscles are so powerful that a panda can easily chew an aluminum dish into tiny pieces. They can also easily bit through a thick bamboo stalk.

30. Even though their diet consists almost exclusively of bamboo, a panda’s digestive system is designed for meat. In fact, they only absorb 20% to 30% of bamboo nutrients, while other plant eaters, like deer, usually absorb around 80%. This means that pandas have to eat almost all of the time they’re awake in order to get enough nutrients to survive.