Pablo Ruiz Picasso was a Spanish painter, sculptor, printmaker, ceramicist, stage designer, poet and playwright who spent most of his adult life in France. Regarded as one of the most influential artists of the 20th century, he’s known for co-founding the Cubist movement, the invention of constructed sculpture, the co-invention of collage, and for the wide variety of styles that he helped developed and explore. Take a look below for 30 more interesting and fun facts about Pablo Picasso.

1. Among his most famous works are the proto-Cubist Les Demoiselles d’Avignon, and Guernica, a dramatic portrayal of the bombing of Guernica by the German and Italian airforces.

2. Picasso demonstrated extraordinary artistic talent in his early years, painting in a naturalistic manner throughout his childhood and adolescence.

3. During the first decade of the 20th century, his style changed as he experimented with different theories, techniques and ideas.

4. After 1906, the Fauvist work of the slightly older artist Henri Matisse motivated Picasso to explore more radical styles, beginning a fruitful rivalry between the two artists, who subsequently were often paired by critics as the leaders of modern art.

5. Picasso’s work is often categorized into periods. While the names of many of his later periods are debated, the most commonly accepted periods in his work are the Blue Period, the Rose Period, the African-influenced Period, Analytic Cubism and Synthetic Cubism, also referred to as the Crystal period. 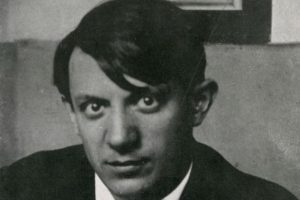 6. Much of Picasso’s work of the late 1910 and early 1920s is in a neoclassical style, and his work in the mid 1920s often has characteristics of Surrealism.

7. Exceptionally prolific throughout the course of his long life, Picasso achieved universal renown and immense fortune for his revolutionary artistic accomplishments, and became one of the best-known figures in 20th century art.

8. French art critic Louis Vauxcelles coined the word “Cubism” when he noted that Picasso’s and Braque’s work were full of “bizarre cubiques.”

10. According to reports, after a Nazi officer saw a picture of Guernica, he asked Picasso if he had done it. Picasso replied, “No, you did.”

11. Picasso would often carry around a pistol loaded with blanks. He would fire it at people he found boring or anyone who insulted Cezanne.

12. Picasso was a child prodigy who could draw before he could talk. 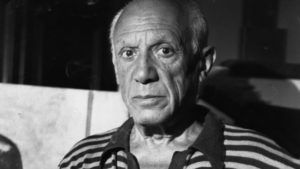 13. He first emerged as a Symbolist, influenced by artists such as Edvard Munch and Henri de Toulouse-Lautrec.

14. Picasso’s name has been used on several commercial products, including a car, perfume and lighters. His heirs continually fight over intellectual property laws concerning his name.

15. He was accepted to the School of Fine Arts when he was 13 years old. While most students completed their entrance exams in a month, he completed his in just one week.

16. When he was 16 years old, he attended Madrid’s Royal Academy of San Fernando. He soon dropped out because he didn’t like formal education.

17. Former Marillion singer, Fish, mentions Picasso in his song “Big Wedge.” He is also the subject of the song “Pablo Picasso” by Jonathon Richman and The Modern Lovers.

18. Picasso was buried by a chateau he bought in 1958 in the south of France. He bought the estate because it was on the slopes of Mount Sainte-Victoire, a favorite place of Cezanne, an impressionist artist.

19. From 1917 to 1924, Picasso designed the curtain, sets, and costumes for several ballets. While his sets and costumes were initially not well received, they’re now considered symbolic of the progressive art of the time. 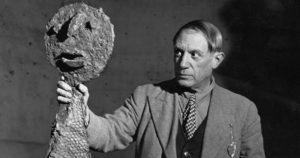 20. Because he was so weak at birth, the midwife thought that he was dead and laid him on a table. His uncle, who was smoking a big cigar, walked over and blew a smoke ring into the infant’s face. Picasso immediately reacted with, “a grimace and a bellow of fury.”

21. When Picasso died, he had no will, so his death duties to the French state were paid in the form of his paintings.

22. Picasso often moved interchangeably between different styles, sometimes even within the same artwork.

23. Picasso’s full name is a series of the names of saints and relatives.

24. He was the first child of Don Jose Ruiz y Blasco and Maria Picasso y Lopez.

25. Picasso’s father was a painter who specialized in naturalistic depictions of birds and other game. 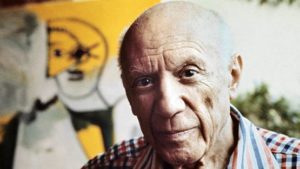 26. Picasso’s mother said that his first words were “piz, piz”, which was short for lapiz and that is the Spanish word for pencil.

27. In 1890, Picasso received formal artistic training in figure drawing and oil painting. He became so preoccupied with his art that his school work suffered.

28. In 1895, when Picasso was 13 years old, his 7 year old sister, Conchita, died of diphtheria and it left him traumatized.

29. When he was 16 years old, Picasso attended Madrid’s Royal Academy of San Fernando, which he stopped attending shortly after enrolling because he didn’t like formal education.

30. By the beginning of 1901, Picasso started singing his work and only signed his last name.