Niccolo di Bernardo dei Machiavelli was an Italian diplomat, politician, historian, philosopher, humanist, and writer of the Renaissance period. He has often been called the father of modern political science. Take a look below for 30 more interesting and fun facts about Niccolo Machiavelli.

1. For many years, he was a senior official in the Florentine Republic, with responsibilities in diplomatic and military affairs.

3. His personal correspondence is renowned by Italian scholars.

4. He was secretary to the Second Chancery of the Republic of Florence from 1498 to 1512, when the Medici were out of power.

5. He wrote his most well-known work, The Prince, in 1513, having been exiled from city affairs.

6. Machiavellianism is widely used as a negative term to characterize unscrupulous politicians of the sort Machiavelli described famously in the Prince.

7. Machiavelli described immoral behavior, such as dishonesty and the killing of innocents, as being normal and effective in politics. He even seemed to encourage it in some situations.

8. His book gained notoriety due to claims that it teaches, “evil recommendations to tyrants to help them maintain their power.”

9. The term “Machiavellian” is often associated with political deceit, deviousness, and realpolitik.

10. Many commentators, such as Baruch Spinoza, Jean-Jacques Rousseau and Denis Diderot, have argued that Machiavelli was actually a republican, even when writing The Prince, and his writings were an inspiration to Enlightenment proponents of modern democratic political philosophy.

11. In one place, Machiavelli noted his admiration for the selfless Roman dictator Cincinnatus. 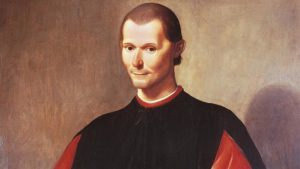 13. He had two siblings, two sisters and one brother.

14. His family put a lot of emphasis on quality education, and his writings bear testimony to the fact that he was an avid reader and mostly read classics.

15. His lawyer father was able to provide him with education in the classics to prepare him for public service.

17. Later on, in 1498, he was named the chancellor, and the chief executive officer of the government of Florence. During his tenure as the chancellor, he conducted 23 diplomatic missions. Apart from that, his job required him to carry out policy decisions, writing and reading reports and writing diplomatic letters to other states.

18. Machiavelli married Marietta Corsini in 1502, and was a father to four sons and two daughter. Most of his letters were saved by his grandson Giovanni Ricci.

19. Machiavelli tried to organize a Florentine militia against the Medici family but his plans failed and he was banished, tortured and stayed away from active politics.

20. His book was condemned by Pope Clement VIII.

21. Apart from The Prince, Machiavelli also wrote books like The Mandrake, which was a satire and the treaties on The Art of War.

22. Since he was a big believer of democracy, he was spited against by the monarchs.

23. Decennale Primo and Decennale Secondo are some of the famous poems that he wrote. He also wrote Mandragola, which is also known as The Mandrake, in 1518, which was a prose comedy.

24. His literary skills have been much debated upon, on the issue of coherence and originality. Many critics describe his work to be inconsistent. It’s also noted that his thoughts on various topics changed over the years and that’s reflected in his literary work.

25. Machiavelli believed that religion was man made, and he didn’t make distinctions between Christians and Pagans. However, he did believe that religion was extremely important in ensuring public order, but often considered religious prophets as politicians.

26. While his take on religion in general is still ambiguous, he did choose politics over religious powers.

27. The 20th century Italian Communist Antonio Gramsci drew great inspiration from Machiavelli’s writings on ethics, morals, and how they related to the State and revolution in his writings on Passive Revolution, and how a society can be manipulated by controlling popular notions of morality.

28. Joseph Stalin read The Price and annotated his own copy.

29. During the first generations after Machiavelli, his main influence was in non-Republican governments.

30. The Price was spoken of highly by Thomas Cromwell in England and had influenced Henry VIII in his turn towards Protestantism, and in his tactics, for example during the Pilgrimage of Grace.