Ferdinand Magellan was a Portuguese explorer who organized the Spanish expedition to the East Indies from 1519 to 1522, resulting in the first circumnavigation of the Earth, completed by Juan Sebastian Elcano. Take a look below for 30 more interesting and fun facts about Ferdinand Magellan.

1. Born into a Portuguese noble family around 1480, Magellan became a skilled sailor and naval officer and was eventually selected by King Charles I of Spain to search for a westward route to the Maluku Islands.

2. Commanding a fleet of five vessels, he headed south through the Atlantic Ocean to Patagonia, passing through the Strait of Magellan into a body of water he named the “peaceful sea.”

3. Despite a series of storms and mutinies, the expedition reached the Spice Islands in 1521 and returned home via the Indian Ocean to complete the first circuit of the globe.

4. Magellan didn’t complete the entire voyage, as he was killed during the Battle of Mactan in the Philippines in 1521.

5. His gift, the Santo Nino de Cebu image remains one of his legacies during his arrival.

7. By visiting this area again but now travelling west, Magellan achieved a nearly complete personal circumnavigation of the globe for the first time in history.

8. The Magellanic penguin is named after him, as he was the first European to note it.

9. Magellan’s navigational skills have also been acknowledged in the naming of objects associated with the stars, including the Magellanic Clouds, which are now known to be two nearby dwarf galaxies; the twin lunar crates of Magelhaens and Magelhaens A; and the Martian crater of Magelhaens.

10. After his trip to East Africa, the King of Portugal denied Magellan any further work because he had been accused of illegal trading. This was his reason for moving to Seville, Spain in 1517.

11. Magellan married Beatriz Barbosa and had a son with her.

12. Beatriz’s father, Diogo, introduced Magellan to the Spanish court so that he could tell them about his idea to set sail, to prove the world was round.

13. The five ships on Magellan’s voyage were the Trinidad, the San Antonio, the Santiago, the Conception, and the Victoria. Magellan’s ship was the Trinidad.

14. There was a fabled passage said to cross South America without having to travel around Cape Horn. This was the route that Magellan wanted to find.

15. On October 21, 1520, Magellan found the passage he had been searching for. It separates Tierra del Fuego from the southern tip of South America. It is a curvy narrow channel that was named after the explorer. It’s called the Strait of Magellan.

16. It took a month to travel the 350 mile strait. The captain of the San Antonio didn’t complete the voyage. He turned around and went back to Spain.

17. In November, 1520, the fleet reached the Pacific Ocean, making them the first Europeans to ever see it. Magellan called it the Mar Pacifico.

18. Magellan and his crew didn’t have enough supplies for the voyage and they had to eat rats and sawdust on the trip to survive. Magellan had underestimated the size of the Pacific Ocean.

19. Magellan converted many of the native at Cebu, in the Philippines, to Christianity. Not all the natives converted and the Cebuans requested Magellan’s help in the battle against the Mactan people, who refused to convert.

21. His name for the Pacific Ocean was adopted by other Europeans.

22. Magellan’s crew observed several animals that were entirely new to European science, including a “camel without humps,” which was probably a guanaco.

23. His global expedition showed the need for an International Date Line to be established.

24. They lost one day because they traveled west during their circumnavigation of the globe, opposite to Earth’s daily rotation. This caused great excitement at the time, and a special delegation was sent to the Pope to explain the oddity to him.

25. Two of the closest galaxies, the Magellanic Clouds in the southern celestial hemisphere, were named for Magellan sometimes after 1800. 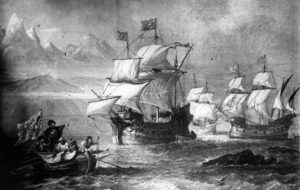 27. The replica of the Victoria, the only ship of Magellan’s to survive the entire voyage, can be visited in Puerto San Julian.

29. The five hundredth anniversary of Magellan’s expedition and circumnavigation will be commemorated in a series of events organized by the municipal council of Sanlucar de Barrameda in Spain, and supported by philanthropic organizations.

30. When Victoria, the one surviving ship and the smallest carrack in the fleet, returned to the harbor of departure after completing the first circumnavigation of the Earth, only 18 men out of the original 237 were on board.