Blaise Pascal was a French mathematician, physicist, inventor, writer and Catholic theologian. He was a child prodigy who was educated by his father, a tax collector in Rouen. Pascal’s earliest work was in the natural and applied sciences, where he made important contributions to the study of fluids, and clarified the concepts of pressure and vacuum by generalizing the work of Evangelista Torricelli. Take a look below for 30 more interesting and fun facts about Blaise Pascal.

1. Pascal wrote in defense of the scientific method.

2. In 1642, while still a teenager, he started some pioneering work on calculating machines.

3. After three years of effort and 50 prototypes, he built 20 finished machines, called Pascal’s calculators and later Pascalines, over the following 10 years, establishing him as one of the first two inventors of the mechanical calculator.

4. Pascal was an important mathematician, helping create two major new areas of research: he wrote a significant treatise on the subject of projective geometry at the age of 16, and later corresponded with Pierre de Fermat on probably theory, strongly influencing the development of modern economics and social science.

5. Following Galileo Galilei and Torricelli, in 1647, he rebutted Aristotle‘s followers who insisted that nature abhors a vacuum. 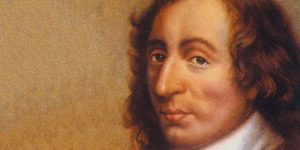 6. Pascal’s results caused many disputes before being accepted.

7. In 1646, he and his sister Jacqueline identified with the religious movement within Catholicism known by its detractors as Jansenism.

9. Following a religious experience in late 1654, he began writing influential works on philosophy and theology.

10. His two most famous works date from 1654: the Lettres provinciales and the Pensees, the former set in conflict between Jansenists and Jesuits.

11. In 1654, he also wrote an important treatise on the arithmetical triangle. 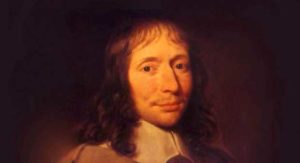 13. Pascal had poor health, especially after the age of 18, and he died just two months after his 39th birthday.

14. When he was 16 years old, he wrote an essay on what was known as the “Mystic Hexagram.” He called the essay “Essay on Conics,” which he then sent to Pere Mersenne.

15. His theorem, which is known to this day as Pascal’s theorem, was so profound that critics like Descartes were initially certain that Pascal’s father had written them.

16. Pascal’s theorem states that a hexagon inscribed in a circle, or conic, forms a line where the three points of opposite sides lie. The line is known as the Pascal line.

17. Pascal built his mechanical calculator while his father struggled to make sense of the tax situation in Rouen.

19. His probably theory was born out of his study of gambling problems, and had an important impact on the development of modern day economics.

20. Pascal also developed what became known as Pascal’s triangle, in which the sums of successive numbers built on themselves to form the numerical row beneath.

21. In the sciences, Pascal’s theories were important to understanding the properties and volume of solids using cycloids.

22. A religious experience when he was a young man led Pascal to make important contributions to Christian philosophy and theology through many of his writings.

23. In honor of his scientific contributions, the name Pascal has been given to the SI unit of pressure, to a programming language, Pascal’s law, Pascal’s triangle and Pascal’s wager.

24. Pascal’s development of probability theory was his most influential contribution to mathematics. Originally applied to gambling, today it is extremely important in economics, especially in actuarial science.

25. In literature, Pascal is regarded as one of the most important authors of the French Classical Period and is read today as one of the greatest masters of French prose.

26. His use of satire and wit influenced later polemicists.

27. The content of his literary work is best remembered for its strong opposition to the rationalism of Rene Descartes and simultaneous assertion that the main countervailing philosophy, empiricism, was also insufficient for determining major truths.

28. In France, prestigious annual awards, such as the Blaise Pascal Chairs, are given to outstanding international scientists to conduct their research in the Ile de France region.

30. The University of Waterloo, Ontario, Canada, holds an annual math contest named in his honor.