Vincent Willem van Gogh was a Dutch Post-Impressionist painter who is among the most famous and influential figures in the history of Western art. In just over a decade, he crated about 2,100 artworks, including around 860 oil paintings, most of them in the last two years of his life. Take a look below for 30 more interesting and fascinating facts about Vincent van Gogh.

1. His paintings include landscapes, still lifes, portraits and self-portraits, and are characterized by bold colors and dramatic, impulsive and expressive brushwork that contributed to the foundations of modern art.

2. Born into an upper middle class family, Van Gogh drew as a child and was serious, quiet and thoughtful.

3. As a young man, he worked as an art dealer, often travelling, but became depressed after he was transferred to London.

4. He turned to religion, and spent time as a Protestant missionary in southern Belgium.

5. Van Gogh drifted in bad health and solitude before taking up painting in 1881, having moved back home with his parents. 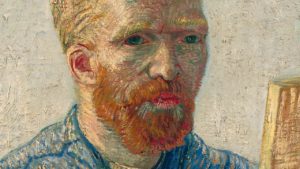 6. His younger brother, Theo, supported him financially, and the two kept up a long correspondence by letter.

7. His early works, mostly still lifes and depictions of peasant laborers, contain few signs of the vivid color that distinguished his later work.

8. In 1886, he moved to Paris, where he met members of the avant-garde, including Emile Bernard and Paul Gauguin, who were reacting against the Impressionist sensibility.

9. As his work developed, he created a new approach to still lifes and local landscapes. His paintings grew brighter in color as he developed a style that became fully realized during his stay in Arles in the south of France in 1888.

10. Van Gogh suffered from psychotic episodes and delusions. He worried about his mental stability and often neglected his physical health by not eating properly and drinking heavily.

11. His friendship with Gauguin ended after a confrontation with a razor, when in a rage, he severed part of his own left ear.

12. He spent time in psychiatric hospitals, including a period at Saint-Remy. 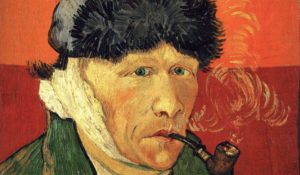 13. After he discharged himself and moved to the Auberge Ravoux in Auvers-sur-Oise near Paris, he came under the care of the homeopathic doctor Paul Gachet.

14. Van Gogh’s depression continued and on July 27, 1890, he shot himself in the chest with a revolver. He died from his injuries two days later.

15. He was unsuccessful during his lifetime, and was considered a madman and a failure. He became famous after his suicide, and exists in the public imagination as the quintessential misunderstood genius, the artist, “where discourses on madness and creativity converge.”

16. His reputation began to grow in the early 20th century as elements of his painting style came to be incorporated by the Fauves and German Expressionists.

17. There was another Vincent van Gogh before him, his brother, who died during labor.

18. It wasn’t until he was 27 years old that Van Gogh started painting. He was self-taught, except for attending art school in Antwerp for a few months only 4 years before his death.

19. Before becoming an art dealer and a painter, he was meant to become a pastor like his father.

20. While he was alive, Van Gogh sold only one of his paintings, The Red Vineyard. 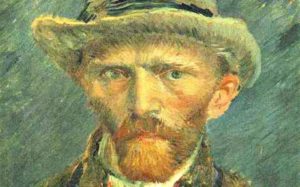 21. During his lifetime, he wrote over 800 letters, which were mostly to his brother Theo, who was also his closest friend.

22. Van Gogh used the money he received from his brother on painting materials and models, which caused him to eat and live in poverty. His diet mainly consisted of bread, coffee and tobacco.

23. The most famous piece of art done by Van Gogh, Starry Night, was done while he was staying in an asylum in France that he checked himself into.

24. He was terrible with women. At one point, he proposed to his widowed cousin and actively pursued her, but she refused. Many believe that Van Gogh pursued her because he wasn’t able to support himself.

25. Van Gogh thought that night time was much more alive and colorful than day time, so he sometimes would paint with candles lining his hat so he could see.

26. At his funeral, Theo let Van Gogh’s small circle of friends take one of his paintings in order to remember him by. His therapist took as many paintings as he could carry. They stayed in the family for many years until they donated most of them to the Louvre. 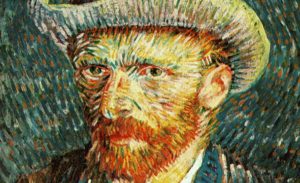 27. Theo’s wife had collected Van Gogh’s paintings and letters, and committed herself to spreading his work so it would gain acknowledgment. If it wasn’t for her, he may never be as famous.

28. After Van Gogh died, the innkeeper of where he stayed sold his two paintings for $10 in 1905 because he thought that they were useless due to deterioration.

29. The relationship between Van Gogh and his brother Theo was so strong that Theo became severely depressed shortly after his brother died. Theo passed away only 4 months after Van Gogh. His wife recognized their bond, and had his remains exhumed so the brothers could be buried next to each other.

30. Because his name was constantly misspelled, he decided to sign his paintings as “Vincent” instead. He didn’t sign all of his paintings either, only the ones that he thought were done.