The Searchers is a 1956 American Technicolor VistaVision Western movie directed by John Ford, based on the 1954 novel by Alan Le May, set during the Texas-Indian Wars, and starring John Wayne as a middle aged Civil War veteran who spends years looking for his abducted niece. Take a look below for 30 more interesting and fascinating facts about The Searchers.

1. Since its release, The Searchers has come to be considered a masterpiece and one of the greatest and most influential movies ever made.

3. The British Film Institute’s Sight and Sound magazine ranked it as the seventh best movie of all time based on a 2012 international survey for film critics.

4. In 2008, the French magazine Cashiers du Cinema ranked The Searchers number 10 on their list of the 100 best movies ever made.

5. In 1989, The Searchers was deemed, “culturally, historically, or aesthetically significant,” by the United States Library of Congress, and selected for preservation in its National Film Registry; it was in the first cohort of films selected for the registry. 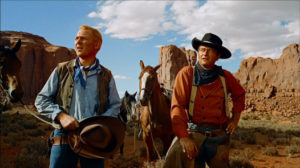 6. The Searchers was the first major movie to have a purpose filmed making-of, requested by John Ford. It deals with most aspects of making the movie, including preparation of the site, construction of props and filming techniques.

7. Considering the part of Ethan Edwards to be the best character that he ever portrayed on-screen and The Searchers to be his favorite movie role, John Wayne named his youngest son Ethan Wayne in homage.

8. Natalie Wood was still a student in high school when the movie was being made, and on several occasions both John Wayne and Jeffrey Hunter had to pick her up at school on days when she was required on the set. This caused a lot of excitement among Wood’s female classmates.

9. The eccentric character of Mose Harper, played by Hank Worden, is loosely based on an actual historical personage called Mad Mose, a legendary half-crazy Indian fighter of the American southwest with a fondness for rocking chairs.

10. During filming, a Navajo child became seriously sick with pneumonia and needed urgent medical attention. John Wayne had his own airplane on location and had his pilot take the little girl to a hospital. For his deed, the Navajos named him “The Man With The Big Eagle.” 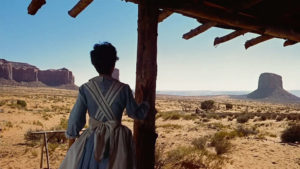 11. In a biography of John Ford, it’s mentioned that Ward Bond, in his motel room after shooting, would walk around naked with the curtains open in hopes of attracting Vera Miles. Apparently, this plan didn’t work.

12. The actors playing Comanche Indians are all Navajo, with the exception of Chief Scar, played by Henry Brandon, a German-born Jew. The language, traditional dress and dances depicted in the movie are all Navajo, not Comanche. The “Comanche Death Song” is actually a social Navajo “Squaw Dance” song.

14. According to Harry Carey Jr.’s book Company of Heroes, John Wayne stayed in character between takes.

16. Walt Disney never told Fess Parker, his Davy Crockett star, that he was in demand by the great John Ford. Parker was horrified when he found what an opportunity he had been denied.

17. David Lean watched The Searchers repeatedly while preparing for Lawrence of Arabia to help give him a sense of how to shoot a landscape. 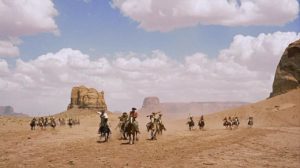 18. Steven Spielberg, Martin Scorsese, George Lucas, Jean-Luc Godard, John Milius and Paul Schrader regard The Searchers are one of the movies that have most influenced them and have all paid some form of homage to it in their work.

19. Vince Gilligan was heavily influenced by the movie’s ending for when he was bringing his television series Breaking Bad to an end.

20. In 1963, critic and direction Jean-Luc Godard called The Searchers the fourth-greatest American movie of the sound era, and once also compared its ending with, “Ulysses being reunited with Telemachus.”

21. Jeffrey Hunter was nearly 29 at the time of filming, although his character was supposed to be a teenager.

22. John Ford made a point of hiring genuine American Indians for his movies, and this one was no exception. The Navajo actually called him “Tall Leader” as they appreciated the fact that he brought employment to an impoverished people.

23. John Ford was willing to allow John Wayne to back out of The Searchers in order to star in 7 Men from Now. However, Wayne chose to star in Ford’s movie instead.

24. The Searchers is one of seven Westerns that John Ford shot in his favorite location, Monument Valley. 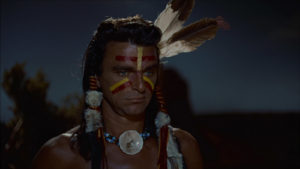 25. The movie was tied with Rebel Without A Cause as 1956’s 11th top box-office attraction. Natalie Wood starred in both movies.

26. In 2006, The Searchers was voted the 97th best screenplay of all time by The Writers Guild Of America.

27. In the early 1990s, producer Charles Roven announced a remake with Terry Gilliam directing Bruce Willis and Johnny Depp. The main difference was that it would have been set in space.

28. Ward Bond played the captain of a small unit of Texas Rangers. Among the actors playing the Rangers were Terry Wilson and Frank McGrath, both of whom later co-starred with Bond in the television series Wagon Train.

29. The Merseybeat band The Searchers took their name from this movie. They’re most famous for their cover of “Needles and Pins.”

30. Producer Merian C. Cooper wanted David O. Selznick to release the movie but Selznick sneered at the idea of a John Wayne Western.