1. Psycho was based on the 1959 novel of the same name by Robert Bloch.

2. Psycho centers on the encounter between a secretary who ends up at a secluded motel after stealing money from her employer, and the motel’s disturbed owner-manager.

3. Psycho was seen as a departure from Hitchcock’s previous movie “North by Northwest,” having been filmed on a low budget, with a television crew and in black and white.

5. Psycho is considered as one of Hitchcock’s best movies and is praised as a major work of cinematic art by international film critics and scholars. 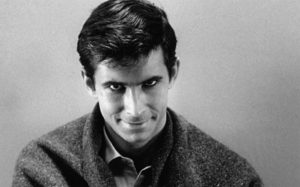 6. Psycho is ranked among the greatest films of all time as it set a new level of acceptability for violence, deviant behavior and sexuality in American movies.

7. Psycho is widely considered to be the earliest example of the slasher film genre.

8. Alfred Hitchcock was so happy with the score written by Bernard Herrmann that he doubled the composer’s salary to $34,501. Hitchcock later said, “33% of the effect of Psycho was due to the music.”

9. On set, Alfred Hitchcock would always refer to Anthony Perkins as “Master Bates.”

10. When the cast and crew began work on the first day, they had to raise their right hands and promise not to divulge one word of the story. Alfred Hitchcock also withheld the ending part of the script from his cast until he needed to shoot it.

11. Alfred Hitchcock bought the rights to the Psycho novel anonymously from Robert Bloch for only $9,000. He then bought up as many copies of the novel as he could to keep the ending a secret. 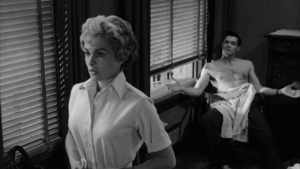 12. Walt Disney refused to allow Alfred Hitchcock to film at Disneyland in the early 1960s because Hitchcock had made, “that disgusting movie, Psycho.”

13. Paramount gave Hitchcock a very small budget to work with on Psycho, because of their distaste with the source material. They also gave him most of the net profits, thinking the movie would fail. When it became a sleeper hit, Hitchcock made a fortune.

14. The Bates house, though moved from its original location, still resides on Universal’s lot.

15. Psycho is the first American movie ever to show a toilet flushing on screen.

16. The score, composed by Bernard Herrmann, is played entirely by stringed instruments.

17. For a shot right at the water stream, Alfred Hitchcock had a six-foot diameter shower head made up so that the water sprayed past the camera lens.

18. To ensure that the people were in the theaters at the start of the movie, rather than walking in part way through, the studio provided a record to play in the foyer of the theaters. 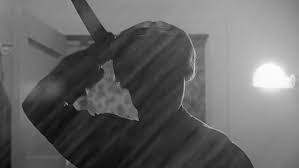 19. The official trailer for the movie back in 1960 ran on for over 6 minutes and 30 seconds, a feat unheard of in today’s trailers.

20. Psycho was Alfred Hitchcock’s last movie for Paramount. By the time principal photography started, Hitchcock had moved his offices to Universal and the movie was actually shot on Universal’s back lot.

21. After Psycho was released, for years Anthony Perkins refused to talk about the part of Norman Bates, because everyone associated Perkins with the character.

22. Alfred Hitchcock used Hershey’s syrup instead of blood because it showed up better on camera.

25. Psycho was the highest grossing movie of Alfred Hitchcock’s career. 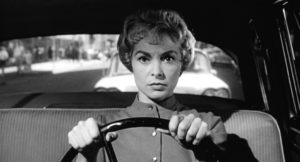 26. While writing the screenplay, Joseph Stefano was in therapy dealing with his relationship with his own mother.

27. A shot of Marion removing her black bra before her showed was removed by the U.S. censors while the scene remained in the U.K. version.

28. Anthony Perkins was paid $40,000 for his role, which is exactly the same amount of money that Marion Crane embezzles in the movie.

29. In 1992, Psycho was selected for preservation by the Library of Congress at The National Film Registry.