1. Wesley Snipes expressed interesting in working on a Black Panther movie in 1992, but the project didn’t come to fruition.

2. In September, 2005, Marvel Studios announced a Black Panther movie as one of ten based on Marvel characters and distributed by Paramount Pictures.

3. Black Panther was announced in October, 2014, and Chadwick Boseman made his first appearance as the character in Captain America: Civil War.

4. In response to being asked what it felt like being one of the only few non-black actors on set, and sometimes the only non-black actor on set, Martin Freeman said, “You think, “Right, this is what black actors feel like all the time?””

5. To prepare for his role, Michael B. Jordan kept to himself while he was on set, reasoning that his character Killmonger is distant and in conflict with other characters. 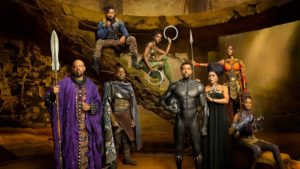 6. Wakanda was mentioned as a location on a S.H.I.E.L.D. monitor in Iron Man 2. The location pinpoints the country as being located at Lake Turkana, on the borders of Kenya and Ethiopia. The region in real life is special for holding great mineral deposits, which are properties similar to Wakanda.

7. Director Ryan Coogler compared the Wakanda vibranium mines to the real-life situation of the Congo mines, where the valuable mineral coltan, which is used in manufacturing digital products, is being mined.

8. Gorilla City, home to the Jabari Tribe, was originally set in a rain forest. Ryan Coogler felt that was too obvious, and suggested that it move to a snow-covered mountain.

9. Three out of every five people in Wakanda are barefoot. This was a deliberate decision by the costuming department.

10. The fighting in the movie is based on African martial arts. The filmmakers also cited the action scenes in Creed and the Kingsman movies as an influence on the style.

11. John Kani and his son Atandwa Kani play T’Chaka in his old age and youth, respectively.

12. The name “Wakanda” comes from the Wakamba tribe of Kenya, also known as the Kamba. 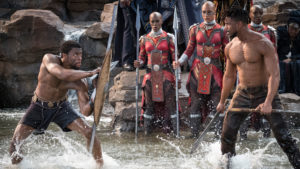 14. The scars on Erik Killmonger’s body are a form of body modification called scarification, a dying tradition carried out by some African tribes. Some tribes use it as a form of identity and some to mark milestones achieved in life. For Killmonger, each scar represented a person he had killed. Him doing this to his body can also be seen as a misguided way for him to connect with his African ancestry.

15. Black Panther was the first of the Marvel characters whose movie rights reverted back to Marvel, having been previously owned by Artisan Entertainment and Columbia Pictures. Marvel got the rights back in 2005.

16. In the comics, Shuri takes over as the Black Panther from T’Challa. This is homaged in the movie where she appears to challenge her brother for the throne.

17. A part of Black Panther was set in Oakland, California, the city in which Ryan Coogler grew up in. It’s also the city where his first feature length movie Fruitvale Station was based.

18. According to Hannah Beachler, there are circular designs featured throughout Wakanda to represent completeness and eternity. 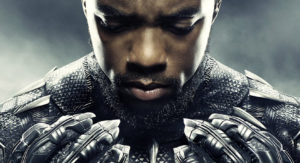 20. Ludwig Goransson utilized specific West African instruments for the rivalry between T’Challa and Killmonger. He used the talking drum, a drum specially built to make a sound resembling human vocal sounds for T’Challa; for Killmonger, he used the tambin flute.

21. In one of the areas where Wakandan glyphs move on translucent walls, one wall is blue and has “4” written on it. This is a homage to the Marvel superhero group the Fantastic Four, in whose comics the Black Panther and Ulysses Klaw made their debut appearances.

22. Shuri cites the self-lacing shoes from Back to the Future Part II as her inspiration for the footwear of the upgraded Black Panther costume.

23. Composer Ludwig Goransson traveled to South Africa and visited the International Library of African Music in Grahamstown to listen to the musical archives of thousands of different tribes in Africa. He also traveled to Senegal and South Africa to record local musicians to form the base of the music.

24. Rondavels, modern building that resemble African huts, are seen at the tops of Wakanda’s skyscrapers. They were inspired by the mountains at Blyde River Canyon, South Africa.

25. Killmonger wears a golden version of T’Challa’s Black Panther suit, which makes him resemble a leopard. In the comics, he owned a leopard named Preyy. 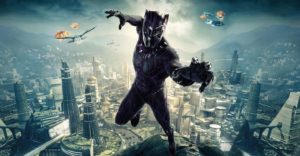 26. The museum that appears in the early part of the movie, that is supposed to be in Britain, is actually the High Museum of Art in Atlanta, Georgia.

27. Despite the African setting and languages, no scenes were actually filmed in Africa. All the Wakanda scenes were filmed in Georgia.

28. T’Challa tells Klaue, “Every breath you take is mercy from me.” This is a line from Jonathan Hickman’s “New Avengers” comic, where he said it to Namor the Sub-Mariner, with whom he was at war.

30. Black Panther became the top-grossing movie in history, to its release, to be directed and written by African-Americans Ryan Coogler and Joe Robert Cole featuring a predominantly black cast with the first major movie superhero played by an African protagonist.