The Avengers, known as Marvel Avengers Assemble in the United Kingdom and Ireland, is 2012 an American superhero movie based on the Marvel Comics superhero team of the same name, produced by Marvel Studios and distributed by Walt Disney Studios Motion Pictures. It’s the sixth movie in the Marvel Cinematic Universe. Take a look below for 30 more interesting and fascinating facts about The Avengers.

2. In the movie, Nick Fury, director of the peacekeeping organization S.H.I.E.L.D., recruits Iron Man, Captain America, the Hulk and Thor to form a team that must stop Thor’s brother Loki from subjugating the Earth.

3. The movie received positive reviews from critics, as well as numerous awards and nominations, including Academy Award and BAFTA nominations for achievements in visual effects.

4. The Avengers grossed over $1.5 billion worldwide and became the third highest grossing movie during its theatrical run, as well as the first Marvel production to generate $1 billion in ticket sales.

5. Robert Downey Jr. kept food hidden all over the lab set, and apparently nobody could find where it was, so they just let him continue doing it. In the movie, that’s his actual food he’s offering, and when he was eating. It wasn’t scripted, he was just hungry. 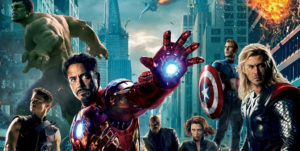 6. There were very few times that everyone was in town at once, but on one night when they were, Chris Evans sent them all a text simply saying “Assemble”, which is the tagline to the movie. Clark Gregg has stated that this is his favorite text message that he ever received.

7. Gwyneth Paltrow is notably barefoot in all her scenes in Stark Tower, while Robert Downey Jr. is in three or four inch platform shoes, so he looks taller than her.

8. Reportedly, Iron Man’s, “Let’s just not come in tomorrow,” speech was improvised by Robert Downey Jr., as was, “Doth mother known thou weareth her drapes?”

9. Ironically, Louis Letterier wanted Mark Ruffalo for the role of Bruce Banner in The Incredible Hulk movie, before Edward Norton was cast.

10. Robert Downey Jr. asked the Marvel Production Manager permission to take away the letter “A”, that was on the Stark Tower with him, but the manager didn’t allow it. However, on his next birthday, the manager gave it to him as a gift.

11. The shocked expression of Loki, after being slammed by the Hulk, was created by Animation Director Marc Chu, shaking Tom Hiddleston violently and repeatedly. 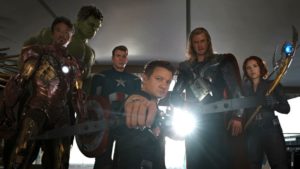 12. To prepare for the role of Hawkeye, Jeremy Renner was trained by Olympic archers.

14. There are two spoken references to the early Incredible Hulk comic books. When Captain America is giving orders, he says “Hulk, smash,” a catchphrase uttered by the Hulk in the comics, as well as The Incredible Hulk movie. After the Hulk thrashes Loki, he says, “Puny god,” a reference to another oft-repeated Hulk phrase, “Puny humans.”

15. Samuel L. Jackson’s role as Nick Fury in The Avengers makes him the second actor, after Hugh Jackman, to play the same comic book character in five different movies.

16. The German police car skidding on its front end after Loki blasts it was a complete accident, as it failed to flip over initially.

17. The Hulk bringing Iron man back to consciousness by roaring at him, was improvised by Mark Ruffalo during his motion-capture performance.

18. Tom Hiddleston revealed in an interview with the Guardian that the code name for the movie early in its production was “Group Hug.”

19. Tony Stark casually refers to three of the other main characters, Loki, Thor and Hawkeye, as either movie characters, or movie titles. He calls Loki “Reindeer Games,” Thor “Point Break,” and Hawkeye “Legolas.” 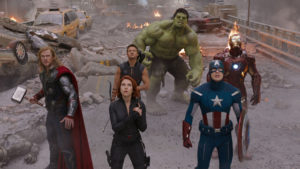 20. Sound Editor Christopher Boyes has states that he went through a complicated process to make the Hulk’s voice. The final product turned out to be a combination of Mark Ruffalo, some Lou Ferrigno, and a little bit of Boyes and two people from New Zealand.

21. The crew hired 25 members of the Ohio based 391st Military Police Force Battalion for the attack on New York City, to add realism to the battle.

22. Joss Whedon suggested to Marvel that there should be a bigger villain plotting behind the scenes, which enabled Loki to conquer the Earth; that bigger villain ended up being Thanos the Mad Titan.

23. According to Joss Whedon, the movie is strongly influenced by the early 1960s Avengers comics, of which he was a fan while growing up: “In those comics, these people shouldn’t be in the same room, let alone on the same team, and that is the definition of family.”

24. There was going to be a brief fight scene between Iron Man and the brainwashed Hawkeye, acting as a nod to the fact that Hawkeye started off as an Iron Man villain in the comics.

25. After Iron Man flies through a Leviathan, he can be seen crashing on the ground in front of a Shawarma Palace, which later appeared in the post credits scene.

26. In the movie, Captain America is a founding member of The Avengers. In the comics, Captain America was unfrozen in Avengers #4, when he was accidentally discovered, when the team was looking for Namor the Sub Mariner. 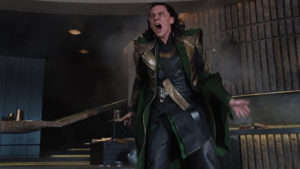 27. Thor is knocked off screen four times: twice by Iron Man and twice by Hulk.

28. When filming the scene of Loki yelling at the Hulk, Tom Hiddleston had a rope tied to his leg, and since the Hulk is just CGI, when the rope was pulled, it would appear that the Hulk gad grabbed him. Tom knew it was going to be pulled during the speech, but he didn’t know when, so that he wouldn’t be anticipating it.

29. Thor spends most of the movie in his Asgardian armor, but with bare arms, a nod to his early appearances in the comics. During his time on the Helicarrier, he is also seen without his tape, which is an allusion to his Ultimate Comics appearance.