Spider-Man: Homecoming is a 2017 American superhero movie based on the Marvel Comics character Spider-Man, co-produced by Columbia Pictures and Marvel Studios, and distributed by Sony Pictures Releasing. It’s the second Spider-Man movie reboot and the 16th movie in the Marvel Cinematic Universe. The movie is directed by Jon Watts, from a screenplay by the writing team of Jonathan Goldstein and John Francis Daley, Watts and Christopher Ford, and Chris McKenna and Erik Sommers. Take a look below for 30 more interesting and fascinating facts about Spider-Man: Homecoming.

2. In Spider-Man: Homecoming, Peter Parker tries to balance high school life with being Spider-Man, while facing the Vulture.

3. Spider-Man: Homecoming grossed over $880 million worldwide, making it the second-most successful Spider-Man movie and the 6th highest grossing movie of 2017.

4. Aaron Davis mentions that he has a nephew. In the comics, Aaron Davis is the Ultimate Marvel universe version of the villain “The Prowler,” whose nephew is Miles Morales, who is also known as the second Ultimate Spider-Man.

5. Nick Fury was originally going to be Peter’s mentor in the movie, with Samuel L. Jackson reprising his role, but they went with Tony Stark instead. 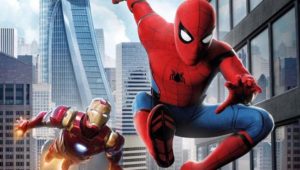 6. Spider-Man: Homecoming is the first live action Spider-Man movie where his costume has resizable visors, providing more expressiveness to his appearance.

8. Pictures of Howard Stark, Abraham Erskine, and Bruce Banner can be seen in Peter Parker’s school.

9. Tom Holland spent a few days attending classes at the Bronx High School of Science in New York City to prepare for his role as Peter Parker. He used his acting coach’s name as an alias.

11. Spider-Man: Homecoming is the first Spider-Man movie where Spider-Man has his iconic web wings from the comics.

12. Tom Holland, at 19 years old, is the youngest actor to be cast as Peter Parker. His predecessors, Toby Maguire and Andrew Garfield, were 25 and 26, respectively, when they were cast. 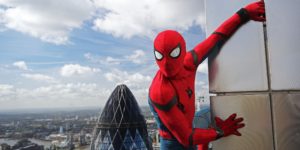 13. Director Jon Watts has revealed that Peter Parker will be around 15 years old at the time of the movie.

14. While Happy is overseeing loading the plane with objects from the Avengers Tower, he references Thor’s belt, but is unable to pronounce it’s name, “Meg-… Meg-… Thor’s magic belt!” The real name for the belt is Megingjord.

15. The music that plays over the Marvel Studios logo is an orchestral version of the classic Spider-Man television theme song, written in 1967 by Paul Francis Webster and Robert “Bob” Harris for the animated television show. In the movie, it has been adapted by composer Michael Giacchino.

16. Peter is shown wearing boxer short when he puts on the suit given to him by Tony Stark. However, Tom Holland said he wore a thong underneath, because the suit was skin tight.

17. In the comics, Flash Thompson was a burly football player. This was updated to make him a wealthy smug character to fit modern portrayals of bullies.

18. The “Homecoming” part of the title is a nod to the inclusion of the character within the Marvel Cinematic Universe.

19. Spider-Man: Homecoming is the first appearance of Cindy Moon, better known in the comics as Spider-Man’s female counterpart, Silk. 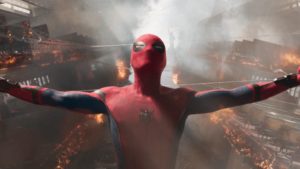 20. Tom Holland confirmed in an interview with BBC Radio 1 that he struggled to say Spider-Man without it sounding like a southern accent during filming. As a result, him saying the name had to be dubbed later.

21. On April 21, 2016, it was made official that Robert Downey Jr., would reprise his role as Tony Stark. This also marks the first time that a Spider-Man movie included another superhero character from the Marvel Cinematic Universe.

22. While some fans complained about the hi-tech Spider-Man suit, many of the gadgets were ideas that appears at one time or another in the Spider-Man comic books over the years.

24. During the initial encounter, Vulture appears in front of the moon briefly with his wings spread. This is similar to a scene in the 1989 movie Batman, with the Batwing flying in front of the moon. In both cases, the person using the “wing” technology is Michael Keaton.

25. Matthew McConaughey expressed interest in the role of Norman Osborn, who is also known as The Green Goblin, Spider-Man’s archenemy. 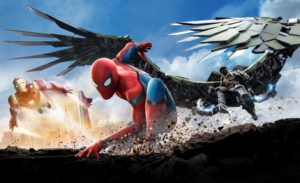 27. Spider-Man: Homecoming is the first solo Spider-Man movie to not mention or feature Uncle Ben in any way.

28. The weekend before Tom Holland was announced as Spider-Man, he posted three videos on his Instagram account, where he showed off his backflip skills. Many websites started pointing this out after he was cast, praising him for his spider-like abilities.

29. Marisa Tomei said that she was shocked to learn that Aunt May was much older in the comic books. However, he brother, a Marvel fan, explained to her that Aunt May wasn’t a blood relative to Peter Parker. This made her realize that Aunt May could be any adult age, depending on how old she and Uncle Ben were when they got married.

30. The main that Peter pursues to get information on the Staten Island Ferry heist has a profile that briefly lists one of his known aliases as “The Prowler,” a reference to the Amazing Spider-Man villain of the same name,