Socrates was a classical Greek philosopher credited as one of the founders of Western philosophy, and as being the first moral philosopher of the Western ethical tradition and thought. An enigmatic figure, he made no writings, and is known chiefly through the accounts of classical writers writing after his lifetime, particularly his students Plato and Xenophon. Take a look below for 30 more interesting and fascinating facts about Socrates.

1. Plato’s dialogues are among the most comprehensive accounts of Socrates to survive from antiquity, though it’s unclear the degree to which Socrates himself is, “hidden behind his best disciple.”

2. Through his portrayal in Plato’s dialogues, Socrates has become renowned for his contribution to the field of ethics, and it is this Platonic Socrates who lends his name to the concepts of Socratic irony and the Socratic method, or elenchus.

3. Socrates wasn’t born into nobility and received only a basic Greek education, learning his father’s stone masonry skills while he was still very young.

4. He was known to make money as a teacher to help make a living. Plato, however, wrote that Socrates didn’t make money from his teaching. 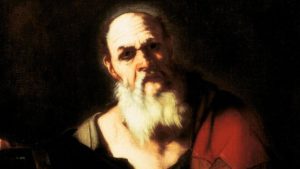 6. Socrates had to serve in the military during the Peloponnesian War.

7. He was a short man with a snub nose and bulging eyes, according to Plato. He didn’t have the appearance of the Athenian Greek god.

8. Socrates believed that the mind was more important than physical beauty.

9. He believed that a person had to truly know themselves in order to be capable of wisdom.

10. Socrates didn’t believe in a Theological doctrine but instead believed ethics were key.

11. He wasn’t focused on questions of the universe, he was focused on ethical questions such as what friendship truly was.

12. Socrates traveled across Athens to gain insight from common man and from elite members of society to help him understand ethics and politics more deeply and thoroughly.

13. Socrates questioned whether gods really existed. This was one of the reasons that he grew to have enemies who believed he was trying to convert the young people of Athens away from religion.

14. He went on to be put on trial for his radical thoughts on philosophy. Those who opposed him felt that he was a threat to society and the current state that they lived in.

16. Socrates was sentenced to death by hemlock poisoning. His friends offered to bribe the guards so that Socrates could flee but he chose not to run. He believed that running would mean that he was afraid of death, which would mean he couldn’t be a true philosopher.

17. Socrates said that his soul was released from his body in the last few moments before his death from the hemlock poison. 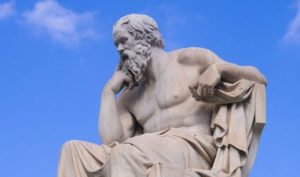 19. Before he turned to philosophy, Socrates took up masonry and sculpting as his profession for several years.

20. He enjoyed good conversation, reading and drinking, and disliked work, travel and possessions. He wore the same shabby robe every day and once took up dancing in an attempt to lose weight.

21. Socrates was known for being both charming and irritating. In Apology, Socrates said, “I am the gadfly which the god had given the state and all day long and in all places am always fastened upon you, arousing and persuading and reproaching you.”

22. Socrates said that he wasn’t a “public” person and that he had no interest in politics.

23. He repeatedly denied that he was a philosopher or even a teacher. He died claiming to be a midwife. He said, “And like a midwife, I am barren, and the reproach which is often made against me, that I ask questions of others and have not the wit to answer them myself, is very just – the reason is God compels me to be a midwife, but does not allow me to bring forth.”

24. He challenged the Sophist view that truth was unknowable and argued that mankind could use reasoning and the scientific method to ascertain the truth. 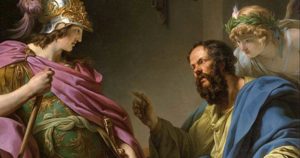 25. Socrates sought universal principals through rational thinking and discourse and raising questions that sought at the basis of ethics and knowledge.

26. Socrates didn’t believe in religion or the physical sciences and was suspicious of democracy, insisting that governments should be run by men of knowledge and ability.

27. He believed that people had a kind a latent wisdom that was corrupted by the world around them. He urged people to pursue virtue and wisdom over materialism and self-interest and is credited with using philosophy to examine ethical questions.

28. Socrates emphasized the importance of mind and not on physical attractiveness. He always believed that if anything could improve the well-being of society, it was philosophy.

29. Socrates thought that when a person begins knowing more about themselves, their reasoning or choice making abilities improve and this is when the person attains true happiness.

30. His method of communicating was known as the Socrates Method and this method sometimes made the answers too obvious, making the opponents look foolish. This is why many people didn’t like his method but some others admired it.