Rosario Isabel Dawson, born May 9, 1979, is an American actress, producer, singer, comic book writer, and political activist. She made her feature movie debut in the 1995 independent drama Kids. Take a look below for 30 more interesting and fascinating facts about Rosario Dawson.

1. For her role in Rent, Dawson won the Satellite Award for Best Supporting Actress – Motion Picture.

2. For her role in Top Five, she was nominated for the Critics’ Choice Movie Award for Best Actress in a Comedy.

5. Her mother, Isabel Celeste, is a writer and singer of Puerto Rican and Cuban ancestry. 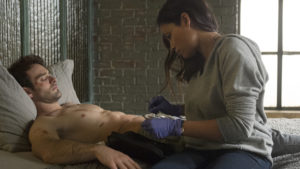 7. When Rosario was a year old, her mother married Greg Dawson, a construction worked, who, “loved and raised Rosario as his own daughter.”

8. Dawson has a half-brother, Clay, who is four years younger than her.

9. At the age of 21, Isabel moved the family into an abandoned building, a squat on the Lower East Side of Manhattan, where she and her husband renovated an apartment and installed the plumbing and electrical wiring for the building, creating affordable housing where Rosario and Clay would grow up.

10. Her uncle is a teacher known as Uncle Frank or Mr. Jump.

11. She was discovered while sitting on her front porch in New York City and asked if she wanted to be in a movie. That movie was Kids. 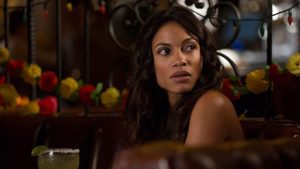 12. She attended an alternative school in downtown Manhattan, where she harbored aspirations of one day becoming a marine biologist.

13. Her character from rent, Mimi, is modeled after her character Mimi in Giacomo Puccini’s La Boheme.

15. She originally had a small role as a nurse in the horror movie The Devil’s Rejects. Her character was cut out of the theatrical release after director Rob Zombie decided to remove the character Dr. Satan. Her character was to be killed off within forty seconds of her entrance.

16. She’s a huge fan of the Star Trek franchise, and even speaks broken Klingon.

17. Although she’s relatively tall at 5’7″, she’s quiet short compared to the rest of her family. Her mother is six feet tall, her father is six feet three inches tall and her half-brother is nearly a foot taller than her at six feet five inches. 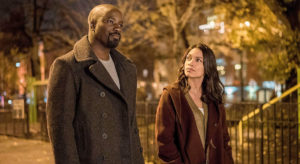 18. As a child, Dawson made a brief appearance on Sesame Street.

19. In 1998, Dawson teamed up with Prince for the re-release of his 1980s hit “1999.” The new remixed version featured the actress in an introductory voice over, offering commentary on the state of the world in the year before the new millennium.

20. In 1999, she appeared in The Chemical Brothers’ video for the song “Out of Control” from the album Surrender.

21. She’s featured on the track “She Lives In My Lap” from the second disc of the OutKast album Speakerboxxx/The Love Below, in which she speaks the intro and a brief interlude towards the end.

22. In 2001, she appeared in the movie, Josie and the Pussycats as band member Valerie Brown.

23. In the film adaption of the popular musical Rent in 2005, she played the exotic dancer Mimi Marquez, replacing Daphne Rubin-Vega, who was pregnant and unable to the part. 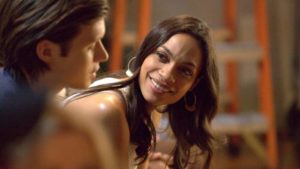 24. After months of speculation, Dawson and comedian Eric Andre confirmed in February 2017 that they were in a relationship.

25. Rosario shared in September 2017, that she and Andrew were still together and that he supported her during surgery due to a ruptured ovarian cyst and internal bleeding.

26. Dawson was arrested in 2004, while protesting against president George W. Bush.

27. Dawson endorsed Barack Obama for re-election in 2012, and Bernie Sanders for the Democratic nomination in the 2016 Democratic Party primaries.

28. On April 15, 2016, Dawson was among the protesters arrested during Democracy Spring in Washington, D.C.

29. In the 2016 U.S. Presidential Election, Dawson endorsed U.S. Green Party Presidential Candidate Jill Stein, saying she could not support either Donald Trump or Hillary Clinton, as she felt that they were for the elites.

30. Dawson is involved with the Lower East Side Girls Club and supports other charities, such as environmental group Global Cool, the ONE Campaign, Operation USA, Oxfam, Amnesty International, Parents, Families and Friends of Lesbians and Gays, the International Rescue Committee, Voto Latino, and StayClose.org.