Rembrandt Harmenszoon van Rijn was a Dutch draughtsman, painter, and printmaker. An innovative and prolific master in three forms of media, he is generally considered one of the greatest visual artists in the history of art and the most important in Dutch art history. Take a look below for 30 more interesting and fascinating facts about Rembrandt.

1. Rembrandt’s works depict a wide range of style and subject matter, from portraits and self-portraits to landscapes, genre scenes, allegorical and historical scenes, biblical and mythological themes as well as animal studies.

2. His contributions to art came in a period of great wealth and cultural achievement that historians call the Dutch Golden Age.

3. Like many artists of the Dutch Golden Age, such as Jan Vermeer of Delft, Rembrandt was also known as an avid art collector and dealer.

4. Rembrandt never went abroad, but he was considerably influenced by the work of the Italian masters and Netherlandish artists who had studied in Italy.

5. Having achieved youthful success as a portrait painter, Rembrandt’s later years were marked by personal tragedy and financial hardships. 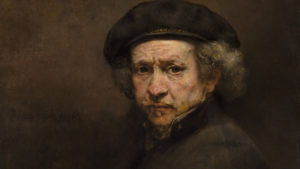 6. Even though he had financial hardships later on in his life, his etchings and paintings were popular throughout his lifetime, his reputation as an artist remained high, and for twenty years, he taught many important Dutch painters.

7. Rembrandt’s portraits of his contemporaries, self-portraits and illustrations of scenes from the Bible are regarded as his greatest creative triumphs.

8. His self-portraits form a unique and intimate biography, in which the artist surveyed himself without vanity and with the utmost sincerity.

9. Rembrandt’s foremost contribution in the history of printmaking was his transformation of the etching process from a relatively new reproductive technique into a true art form, along with Jacques Callot.

10. His reputation as the greatest etcher in the history of the medium was established in his lifetime and never questioned since. 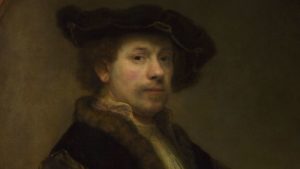 11. Few of his paintings left the Dutch Republic while he lived, but his prints were circulated throughout Europe, and his wider reputation was initially based on them alone.

12. In his works, he exhibited knowledge of classical iconography, which he molded to fit the requirements of his own experience.

13. Because of his empathy for the human condition, he has been called “one of the great prophets of civilization.”

14. Rembrandt first signed his paintings using his initials. He then went by his first name, like the master painters before him, adding a “d” to his signature.

15. His tuition cost 100 guilders per year, not including lodging. He took no beginners and earned more by selling his pupils’ works. The students worked in an attic partitioned with paper or sail cloth.

16. As per practice, the students copied their teacher’s works before developing their own style. Some students became studio assistants whose works were difficult to distinguish from Rembrandts.

17. He was legendary for his uncompromising realism. His “deceive the eye” paintings made objects look like they exist in reality.

18. An analysis of his works from a Harvard Medical School neurologist proposes that he may have been stereoblind or unable to see in full depth.

19. His flattened perception may have helped him recreate figures on a 2D surface. 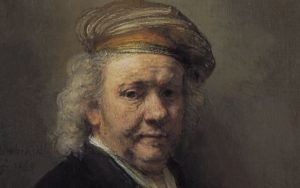 20. Rembrandt owned a house which cost 13,000 guilders, but he paid only a third of the mortgage on it. He died in debt.

21. His housekeeper and mistress took his late wife’s jewelry and pawned it. The jewels were part of the inheritance for Rembrandt’s only surviving child, Titus.

22. The Night Watch painting was trimmed on all sides to fit its second home at the Amsterdam Town Hall. Around 20% of the left side was removed.

23. As a result of downsizing The Night Watch painting, the two leftmost figures are completely missing. The original piece included a balustrade and steps, adding more depth to the scene.

24. In 1911 and 1975, two men slashes The Night Watch painting with knives. In 1990, the piece suffered an acid attack. Despite restoration, damage from the knife attacks remain visible upon close inspection.

25. In case of fire and emergencies, the museum installed a trapdoor beneath The Night Watch painting. 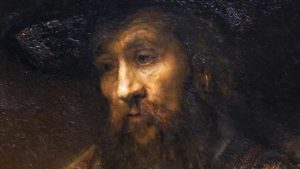 26. His paintings are characterized by luxuriant brushwork, rich color, and a mastery of chiaroscuro.

27. His drawings constitute a vivid record of contemporary Amsterdam life.

28. The greatest artist of the Dutch school, Rembrandt was a master of light and shadow whose paintings, drawings, and etchings made him a giant in the history of art.

30. Rembrandt’s portraits became famous because of his ability to capture the emotion and personality of the people in the paintings. At first, Rembrandt only painted the person while sitting still or in line position. Later, he was able to paint the person in active motion.