Raphael Sanzio de Urbino was an Italian painter and architect of the High Renaissance. His work is admired for its clarity of form, ease of composition, and visual achievement of the Neoplatonic ideal of human grandeur. Take a look below for 30 more interesting and fascinating facts about Raphael.

1. Together with Michelangelo and Leonardo da Vinci, he forms the traditional trinity of great masters of that period.

2. Raphael was massively productive, running an unusually large workshop and, despite his death at 37, leaving a large body of work.

3. Many of his works are found in the Vatican Palace, where the frescoed Raphael Rooms were the central, and the largest, work of his career.

4. The best known work is The School of Athens in the Vatican Stanza della Segnatura.

5. After his early years in Rome, much of his work was executed by his workshop from his drawings, with considerable loss of quality. 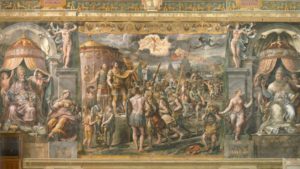 6. He was extremely influential in his lifetime, though outside of Rome, his work was mostly known from his collaborative printmaking.

7. After his death, the influence of his great rival Michelangelo was more widespread until the 18th and 19th centuries, when Raphael’s more serene and harmonious qualities were again regarded as the highest models.

8. His career falls naturally into three phases and three styles, first described by Giorgio Vasari: his early years in Umbria, then a period of about four years absorbing the artistic traditions of Florence, followed by his last hectic and triumphant twelve years in Rome, working for two Popes and their close associates.

9. His father was Giovanni Santi, the Duke of Urbino’s court painter.

10. Giovanni had been teaching Raphael to paint, but died when Raphael was only 11 years old.

11. Raphael took over his father’s workshop and became one of the town’s best painters.

12. A master painter, Pietro Vannunci, invited Raphael to become his apprentice in 1500, which lasted for four years.

13. During Raphael’s apprenticeship, he painted several pieces including “Mond Crucifixion”, “The Three Graces,” “The Knight’s Dream” and “Marriage of the Virgin.”

14. At the end of his apprenticeship in 1504, Raphael moved to Florence and studied the works of Masaccio, Michelangelo, Leonardo da Vinci, and Fra Bartolommeo, which helped him further develop his own style.

16. In 1508, Raphael painted the “Entombent,” which is considered his most ambitious work in Florence.

17. In 1508, Raphael moved to Rome where Pope Julius II had him paint “Stanze” in the Vatican.

18. Raphael’s painting “Portrait of a Young Man,” which he finished in 1514, was lost during World War II. It was believed to have been a self-portrait.

19. Raphael also worked as an architect, designing for the Pope after his architect, Donato Bramante, died. Raphael designed chapels including Santa Maria del Popolo Chapel in Rome, and he designed a chapel in Sant Eligio degli Orefici, as well as part of the new Saint Peter’s basilica. 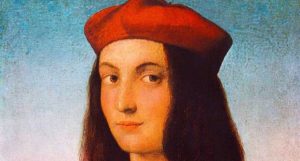 20. He designed ornamental palaces, inspired by his predecessor Donato Bramante.

21. Raphael had approximately 50 students and assistants working for him at his workshop in Rome. He was so well known that other masters came to work with him in Rome.

22. At the time of his death, he was working on his largest canvas titled “The Transfiguration.”

23. From 1517 until his death, Raphael lived in the Palazzo Caprini in the Borgo, in rather grand style in a palace designed by Bramante.

24. He never married, but in 1514 became engaged to Maria Bibbiena, Cardinal Medici Bibbiena’s niece. He seems to have been talked into marriage by his friend the Cardinal, and his lack of enthusiasm seems to be shown by the marriage not having taken place before she died in 1520.

25. He is said to have had many affairs, but a permanent fixture in his life in Rome was “La Fornarina,” Margherita Luti, the daughter of a baker named Francesco Luti from Siena who lived at Vie del Governo Vecchio. 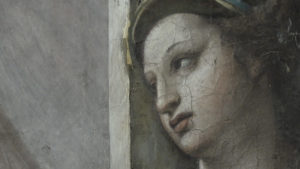 26. Raphael was made a “Groom of the Chamber” of the Pope, which gave him status at court and an additional income, and also a knight of the Papal Order of the Golden Spur.

27. Raphael claims to have toyed with the ambition of becoming a Cardinal, perhaps after some encouragement from Leo, which also may account for his delaying his marriage.

28. Raphael’s premature death on Good Friday, which was possibly his 37th birthday, was due to unclear causes, with several possibilities raised by historians.

29. His funeral was extremely grand and was attended by large crowds.

30. The inscription in his marble sarcophagus was written by Pietro Bembo and it reads: “Here lies that famous Raphael by whom Nature feared to be conquered while he lived, and where he was dying, feared herself to die.