1. North by Northwest is a story of mistaken identity, with an innocent man pursued across the United States by agents of a mysterious organization trying to prevent him from blocking their plan to smuggle out microfilm that contains government secrets.

2. North by Northwest is one of several Alfred Hitchcock movies that features a music score by Bernard Herrmann and an opening title sequence by graphic designer Saul Bass.

3. This movie is generally cited as the first to feature extended use of kinetic typography in its opening credits.

4. North by Northwest is listed among the canonical Hitchcock movies of the 1950s and is often listed as being among the greatest movies of all time.

5. In 1995, the movie was selected for preservation in the National Film Registry by the United States Library of Congress as being, “culturally, historically, or aesthetically significant.” 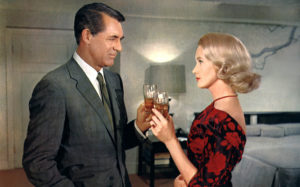 6. Less than eight feet of film was cut from the final release. Eight feet is about 5 seconds.

7. While on location at Mr. Rushmore, Eva Marie Saint discovered that Cary Grant would charge fans 15 cents for an autograph.

8. Alfred Hitchcock couldn’t get permission to film inside the UN, so footage was made of the exterior of the building using a hidden camera, and the rooms were later recreated on a soundstage.

9. The movie has been referred to as “the first James Bond film” due to its similarities with splashily colorful settings, secret agents, and an elegant, daring, wisecracking leading man opposite a sinister yet strangely charming villain. The crop duster scene inspired the helicopter chase in From Russia with Love.

10. Roger O. Thornhill claims that the “O” stands for “nothing.” This is a reference to David O. Selznick, whose “O” also didn’t meant anything.

11. Roger O. Thornhill appears on the left side of the screen for almost the entire movie.

12. The scenes where the crop duster is chasing and shooting at Thornhill were filmed with a real airplane while the scene where the plane crashes into the fuel truck was done using large models of both truck and plane. 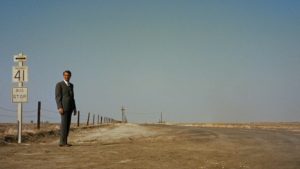 14. Cary Grant was initially reluctant to accept the role of Roger Thornhill since at 55 he was much older than the character.

15. In the DVD documentary, Eva Marie Saint recounts how Alfred Hitchcock, dissatisfied with the costumes the studio had designed for her, marched her to Bergdorf Goodman and personally picked out clothes for her to wear.

16. Jessie Royce Landis was only 7 years older than Cary Grant, who plays her son.

17. Rather than go to the expense of shooting in a South Dakota woodland, Alfred Hitchcock planted 100 ponderosa pines on an MGM soundstage.

18. North by Northwest is the only movie Alfred Hitchcock made for MGM.

19. Cary Grant got $450,000 for North by Northwest, a substantial amount for the time, plus a percentage of the gross profits. He also received $315,000 in penalty fees for having to stay nine weeks past the time his contract called for. 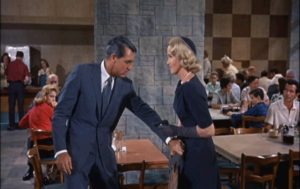 20. Cinematographer Robert Burks recalled how Alfred Hitchcock, frustrated with the inefficiency and costliness of paying for police protection again and again when shooting on location, referred to New York’s finest as “New York’s worst” in an interview. When the crew arrived at their next location, The Plaza Hotel, there was no police protection.

21. When Martin Landau first sees Cary Grant, he says, “He’s a well-tailored one.” All of Landau’s suits for the movie were made by Grant’s personal tailor.

22. When the movie was released, there were complaints that Roger Thornhill looked the same age as his mother.

23. Among the problems that the Production Code found with North by Northwest was the effeminacy of the henchman Leonard, who was played by Martin Landau.

24. Roger Thornhill is saved three times on his journey by Eve. He hides in a toilet on the train while she sends the police in the other direction, she hides him in her bunk bed in her cabin, and she gives him her shaving kit to disguise his face in the station bathroom. In Greek mythology, the hero, often on a journey, is always saved three times.

25. In one scene, Van Damme jokingly suggests Thornhill to try out for the Actor’s Studio. Both Eva Marie Saint and Martin Landau were from the Actors’ Studio. 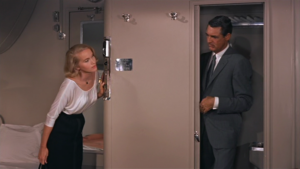 26. In an interview, Alfred Hitchcock’s daughter, Patricia Hitchcock, reveals that her husband worked at the time of the filming for Magnum Oil. Magnum Oil is the name on the fuel truck in the famous crop duster and oil truck scene.

27. The train station scene was shot in New York City’s Grand Central Terminal. Among the onlookers watching the scene being filmed were future directors George A. Romero and Larry Cohen.

28. At the auction, Thornhill remarks that Van Damme, Kendall, and Leonard resemble a scene worthy of Charles Addams. Addams created the macabre yet debonair characters of the various Addams Family TV series and movies.

29. MGM wanted Gregory Peck to star as Roger O. Thornhill, but Alfred Hitchcock refused, claiming that he was too stone-faced.