James Madison Jr. was an American statesman and Founding Father who served as the fourth President of the United States from 1809 to 1817. He is hailed as the “Father of the Constitution” for his pivotal role in drafting and promoting the United States Constitution and the Bill of Rights. Take a look below for 30 more interesting and fascinating facts about James Madison.

1. Born into a prominent Virginia planting family, Madison served as a member of the Virginia House of Delegates and the Continental Congress during and after the American Revolutionary War.

2. In the late 1780s, he helped organize the Constitutional Convention, which produced a new constitution to supplant the ineffective Articles of Confederation.

3. After the Convention, Madison became one of the leaders in the movement to ratify the Constitution, and his collaboration with Alexander Hamilton produced The Federalist Papers, among the most important treatises in support of the Constitution.

4. After the ratification of the Constitution in 1788, Madison won the election to the United States House of Representatives.

5. While simultaneously serving as a close advisor to President George Washington, Madison emerged as one of the most prominent members of the 1st Congress, helping to pass several bills establishing the new government. 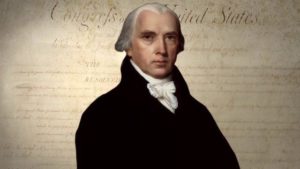 6. For his role in drafting the first ten amendments to the Constitution during the 1st Congress, Madison is known as the “Father of the Bill of Rights.”

7. Though he had played a major role in the enactment of a new constitution that created a stronger federal government, Madison opposed the centralization of power sought by Treasury Secretary Alexander Hamilton during Washington’s presidency.

8. To oppose Hamilton, Thomas Jefferson and Madison organized the Democratic-Republican Party, which became one of the nation’s two first major political parties alongside Hamilton’s Federalist Party.

9. After Jefferson won the 1800 presidential election, Madison served as Jefferson’s Secretary of State from 1801 to 1809.

10. In the role of Secretary of State, Madison supervised the Louisiana Purchase, which double the nation’s size. 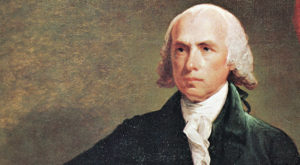 11. Madison succeeded Jefferson with a victory in the 1808 presidential election, and he won re-election in 1812.

12. After the failure of diplomatic protests and a trade embargo against the United Kingdom, Madison led the United States into the War of 1812.

13. The War of 1812 was an administrative morass, as the United States had neither a strong army nor a strong financial system. As a result, Madison came to support a stronger national government and military, as well as the national bank, which he had long opposed.

14. Madison was introduced to his wife Dolley by Aaron Burr.

15. Madison and Aaron Burr were Princeton classmates. Madison graduated one year before Burr. They were in rival debating societies at Princeton.

16. There was a 17 year difference in age between Madison and his wife Dolley. The couple dated for just four months before their marriage in 1794. James was 43 years old and Dolley was 26.

17. Madison didn’t fight in the Revolutionary War. Small in stature and sometimes sickly, Madison served briefly in the Virginia militia and then entered politics at a young age.

18. He was the youngest delegate at the 1780 Continental Congress in Philadelphia. 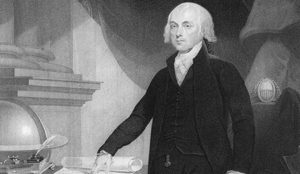 20. Towards the end of his life, a modest Madison said the Constitution, “ought to be regarded as the work of many heads and many hands.”

21. Madison feared that actually listing individual rights in the Constitution would possibly limit other, unlisted rights. However, he had a change of heart when it became apparent that a Bill of Rights was needed to get the Constitution ratified.

22. During the 1st Congress, Madison presented the first draft of the Bill, which he had written. It had 9 articles with 20 amendments.

23. After serving in the House for eight years, Madison walked away from national politics in March 1797 and returned to his estate at Montpelier.

25. Unlike George Washington and Thomas Jefferson, who had many pursuits outside of work, Madison stuck with playing chess and reading Latin and Greek literature in their original languages. 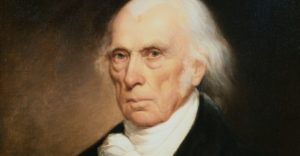 26. Although he was educated by Presbyterian clergymen, young Madison was an avid reader of English deist tracts. As an adult, Madison didn’t pay much attention to religion.

27. Though most historians have found little indication of his religious leanings after he left college, some scholars indicate that he leaned towards deism.

28. Regardless of his own religious beliefs, Madison believed in religious liberty, and he advocated for Virginia’s disestablishment from the Anglican Church throughout the late 1770s and 1780s.

29. Madison grew up on a plantation that made use of slave labor and he viewed the institution as a necessary part of the Southern economy, though he was troubled by the instability of a society that depended on a large enslaved population.

30. At the Philadelphia Convention, Madison favored an immediate end to the importation of slaves, though the final document barred Congress from interfering with the international slave trade until 1808.