It Happened One Night is a 1934 American pre-Code romantic comedy movie with elements of screwball comedy directed and co-produced by Frank Capra, in collaboration with Harry Cohn, in which a pampered socialite, played by Claudette Colbert, tries to get out from under her father’s thumb and falls in love with a roguish reporter, played by Clark Gable. Take a look below for 30 more interesting and fascinating facts about It Happened One Night.

1. The plot is based on the August 1933 short story “Night Bus” by Samuel Hopkins Adams, which provided the shooting title.

2. It Happened One Night is one of the last romantic comedies created before the MPAA began enforcing the 1930 production code in 1934.

4. In 1993, It Happened One Night was selected for preservation in the United States National Film Registry by the Library of Congress, being deemed, “culturally, historically or aesthetically significant.”

5. In 2013, the movie underwent an extensive restoration. 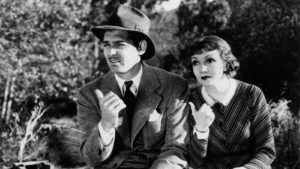 6. Clark Gable gave the Oscar he won for his performance in It Happened One Night to a child who admired it, telling him it was the winning of the statue that had mattered, not owning it. The child returned the Oscar to the Gable family after Clark’s death.

7. Director Frank Capra came up with the idea about, “the walls of Jericho,” because Claudette Colbert refused to undress in front of the camera.

8. Claudette Colbert complained nearly every day during the making of the movie. On the last day of shooting, she told a friend, “I just finished making the worst picture I’ve ever made.”

9. When Clark Gable showed up for work on the first day, he reportedly said, grimly, “Let’s get this over with.”

10. When director Frank Capra asked Claudette Colbert to expose her leg for the hitchhiking scene, she initially refused. Later, after having seen the leg of her body double, she changed her mind, insisting that, “that is not my leg!”

11. Clark Gable arrived for his first meeting with Frank Capra drunk, rude and angry. In spite of this inauspicious beginning, they eventually became friends.

12. Clark Gable was loaned to It Happened One Night by MGM as punishment for his affair with Joan Crawford. 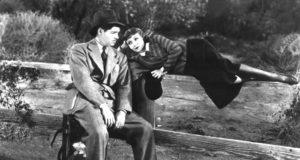 13. According to William L. Shirer’s “Berlin Diary,” It Happened One Night was one of Adolf Hitler’s and Joseph Stalin’s favorite movies.

14. Bette Davis wanted the role of Ellie, but Warner Brothers refused to loan her.

15. Robert Montgomery turned down the male lead, saying that the script was the worst thing he had ever read. Fredric March also refused the part.

16. Claudette Colbert was so convinced that she would lose the Oscar competition in 1935 to write-in nominee Bette Davis, that she decided not to attend the awards ceremony. When she won that year, contrary to her belief, for her performance in It Happened One Night, she was summoned from a train station to pick up her Oscar.

17. It Happened One Night is often credited as the very first screwball comedy.

18. Frank Capra grew concerned when so many stars rejected his script and he turned to playwright Myles Connolly for advice. The writer thought that the characters could be made more sympathetic and he made constructive suggestions, which were incorporated into the script within a week.

19. Frank Capra, the director, makes a cameo as one of the passengers on the bus singing the third couplet of “The Daring Young Man on the Flying Trapeze.” 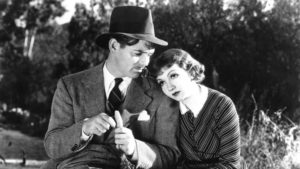 21. At the Miami bus station, friends of Peter Warne refer to him as “The King”, which was Gable’s nickname in real life.

22. In 1996, Steven Spielberg anonymously purchased Clark Gable’s Oscar to protect it from further commercial exploitation, gave it back to the Academy of Motion Picture Arts and Sciences, commenting that he could think of, “no better sanctuary for Gable’s only Oscar than the Motion Picture Academy.”

23. Columbia Pictures didn’t have much faith in the movie and released it without much fanfare and little advertising. It was quickly pushed out to secondary theaters where it suddenly became a runaway success, and eventually become Columbia’s biggest hit to date.

24. It Happened One Night became the first movie to win both the Academy Award and National Board of Review Award for Best Picture.

25. Instead of the usual static camera set-up, Frank Capra insisted on sticking a camera onto a crane. This enabled him to do more tracking shots, which was entirely in keeping with a movie in which the main characters spend most of their time on the move. 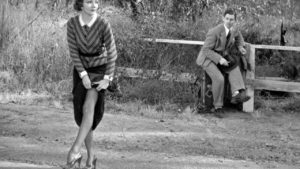 26. Carole Lombard turned down the role of Ellie. Ironically, she would later marry Clark Gable.

28. In 2006, Premiere voted It Happened One Night as one of The 50 Greatest Comedies Of All Time.

29. Claudette Colbert and Clark Gable would act together again six years later on Boom Town, though the movie was nowhere near as successful as It Happened One Night.

30. Although Claudette Colbert and Frank Capra had a slightly difficult working relationship while filming It Happened One Night, she nevertheless appreciated his efforts and thanked him when she won the Oscar for Best Actress.