2. The movie won multiple awards, including Best Picture, Best Actor for Crowe and three other Oscars at the 73rd Academy Awards.

3. Gladiator has been credited with rekindling interesting in entertainment centered around ancient Greek and Roman culture, such as the TV series Rome.

4. Maximus’ description of his home, specifically how the kitchen is arranged and smells in the morning and at night, was ad-libbed. It’s a description of Russell Crowe’s own home in Australia.

5. Joaquin Phoenix ad-libbed his scream of, “Am I not merciful?” Connie Nielsen wasn’t expecting it, and her frightened reaction was genuine. 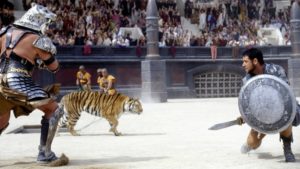 6. Oliver Reed died three weeks before principal photography ended. Since he was considered a key character, a clause in the movie’s insurance coverage would have allowed the filmmakers to re-shoot all of Reed’s scenes with another actor, and the insurers would pay for it, which was an estimated $25 million. However, most of the actors and crew were exhausted from the punishing schedule, and Ridley Scott didn’t want to cut Reed from the movie. The script was re-written, a body double and CGI were used to give Reed’s character a plausible resolution.

7. The wounds on Russell Crowe’s face after the opening battle scene are real, caused when his horse startled and backed him into tree branches. The stitches in his cheek are clearly visible when he’s telling Commodus he intends to return home.

8. Five tigers were brought in for the scene in the arena where Maximus fights Tigris the Gaul. A veterinarian armed with tranquilizer darts was there the entire time. For safety’s sake, Russell Crowe was kept at least 15 feet away from the tigers.

9. Over the course of the gladiatorial scenes, Russell Crowe lost all feeling in his right forefinger for two years after a sword fight, aggravated an Achilles tendon injury, broke a foot bone, cracked a hip bone, and popped a few bicep tendons out of their sockets.

10. Connie Nielsen found the 2,000 year old signet ring she wears in the movie in an antique store. 11. The opening battle scene was filmed in Bourne Woods, Surrey, England. The Royal Forestry Commission had originally slated the area for deforestation, so Ridley Scott offered them his facilities to burn the woods to the ground. The Commission accepted.

12. Mel Gibson was offered the lead role, but he turned it down. At 43, he felt he was too old to play Maximus.

13. Ridley Scott resisted any suggestion that Maximus and Lucilla should have a sexual relationship, because it would decrease his need to be with his murdered wife and son. Russell Crowe was also against it, feeling that it wasn’t in character.

14. Russell Crowe became friends with Sir Richard Harris during filming. However, Oliver Reed took an instant dislike to Crowe and, at one point, challenged him to a fight.

15. Gladiator is Russell Crowe’s favorite American film that he has done. He also cites Maximus as his favorite character that he’s played so far.

16. Like modern day athletes, ancient Roman gladiators did product endorsements. The producers considered including this in the script, but discarded the idea as unbelievable. 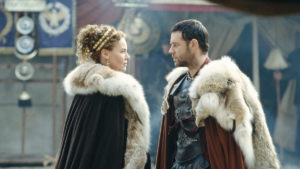 17. Oliver Reed’s main motivation for taking the part of Proximo was because he wanted a, “free trip to London to see a couple of shows.”

18. In the iconic shot of Maximus’ hand brushing the stalks of wheat, the hand actually belongs to Stuart Clark, Russell Crowe’s stunt double.

19. Many of the animals were loaned to the production from the zoo in Rabat, Morocco, as a way of getting around the country’s strict animal important rules.

20. Costume Designer Janty Yates and her team created more than 10,000 costumes for the cast and extras.

22. For the crowd scenes in the Colosseum, in addition to the real-life extras and the digital ones, 400 cardboard cut-outs of spectators were also used.

23. Luciano Pavarotti was asked to perform on the soundtrack but he turned down the opportunity, something that he later regretted.

24. Maximus’s tattoo “SPQR” stands for “Senatus Populusque Romanus,” which translates to “The Senate and the Roman People.” This was one of the main slogans of Rome throughout its history. 25. Due to Academy regulations at the time, co-Composer Lisa Gerrard was denied an Oscar nomination while Hans Zimmer received one, which created a huge controversy over the Academy’s snubbing of Gerrard’s from the nomination. The two, however, did win the Golden Globe Award for Best Original Score – Motion Picture as co-Composers.

26. The movie had surpassed its $103 million budget within two weeks of release.

27. Richard Harris would frequently ignore any newly re-written scenes, as he couldn’t be bothered to relearn his lines.

28. A replica of about one third of Rome’s Colosseum was built in Malta, to a height of 52 feet, mostly from plaster and plywood. The remainder of the building was added in digitally. It took several months to build, at a reputed cost of $1 million.

29. Lou Ferrigno was originally cast as Tigris of Gaul, but was replaced during production by Sven-Ole Thorsen, who had been lobbying hard for the part.

30. The real-life Commodus was born to a mother who was rumored to have either slept with a Gladiator or had bathed in the blood of one. Many took the myth as legend, believing that such led to the resulting “Gladiator Emperor.”

14 Incredible And Fun Facts About Impmon From Digimon