Edge of Tomorrow is a 2014 American science fiction movie starring Tom Cruise and Emily Blunt. Doug Liman directed the movie based on a screenplay adapted from the 2004 Japanese light novel “All You Need Is Kill” by Hiroshi Sakurazaka. Take a look below for 30 more interesting and fascinating facts about Edge of Tomorrow.

1. The movie takes place in a future where Earth is invaded by an alien race. Major William Cage, a public relations officer with no combat experience, is forced by his superior to join a landing operation against the aliens. Though Cage is killed in combat, he finds himself in a time loop that sends him back to the day preceding the battle every time he dies.

2. In late 2009, 3 Arts Productions purchased the rights to the novel and sold a spec script to Warner Brothers.

3. The movie was a box office success, grossing over $370 million in theaters worldwide and received positive reviews from critics.

4. When Hiroshi Sakurazaka wrote the novel, he got the idea from playing video games and resetting it over and over until finding the winning strategy.

5. It was never stated in the movie, but in the manga, the reason why Rita uses a melee weapon is because during her “resets” she would often run out of ammo, which resulted in her deaths. Keiji, in the manga, also learned about the convenience of a melee weapon and started using one. 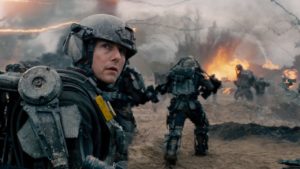 6. During an early sequence in the movie, Emily Blunt punches a young soldier who says, “Bloody hell, it’s the Full Metal Bitch!” The part was played by her real life younger brother, who had a cameo in the movie.

7. Tom Cruise admitted that Emily Blunt was an actress he wanted to work with for a long time, and he recommended her to the producers for the role of Rita.

8. When Emily Blunt’s character is introduced, she’s doing a “planche” hold. Although she needed a wire for help on long takes, she’s actually capable of doing that maneuver without assistance. In fact, when discussing the introduction, a cast member said, “Em, show that yoga move,” and she casually demonstrated it.

9. The default language set up for Cage’s battle armor is Japanese, which is a nod to the novel’s country of origin.

10. Tom Cruise spent over $100,000 on a lavish wrap party for the cast and crew. He didn’t attend himself, as he was finishing his scenes for the movie.

11. In the original book, the Mimics are invading Tokyo. Rita is an American nicknamed “Full Metal Bitch” and Cage is a Japanese man named Keiji Kiriya, nicknamed “Killer Cage” by the end.

12. During the opening sequence of the movie, among other scrambled television footage, there are brief scenes from the Chelyabinsk meteor event, which took place in February, 2013. 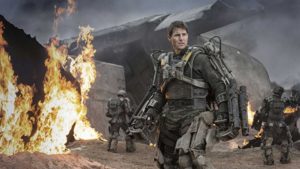 13. It was Tom Cruise’s idea to do three film premieres in one day. Emily Blunt said that it was harder for a girl because she needed a different dress, hairdo and makeup for each one, while he just needed a suit.

14. Doug Liman wanted to do the movie because it showed a role that Tom Cruise hadn’t done yet; someone very bad at what they do.

15. During the opening credits, Cage is making a statement on the upcoming Operation Downfall. The room behind him is NORAD command from the movie WarGames.

16. Tom Cruise wanted Cage’s deaths to be terrifying as well as humorous.

17. Tom Cruise did all of his own stunts. Doug Liman said that he could make an amazing career out of it.

18. Tom Cruise didn’t want the exo-suits to be too CGI, so it would be more real to the audience. He showed up two months early to research and develop the suit. He thought its weapons were fun and cool. However, Emily Blunt was unprepared for the weight of the suit, which was between 85 and 90 pounds, and the armaments, which were between 120 to 125 pounds.

19. Even though he’s in every scene, Tom Cruise doesn’t have any dialogue through the final six minutes of the movie. 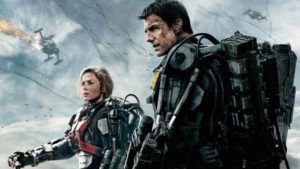 20. Cage never mentions how many times the reset had happened to him, during the entire movie. Even though Rita asks him on a few occasions about how many times, he never answers with a number. Rita once says that she watched Hendricks die 300 times. That is the only mention of reset times.

21. Brad Pitt was originally considered for the role of Bill Cage.

23. Following her lead roles in The Adjustment Bureau and Looper, Edge of Tomorrow marks the third time that Emily Blunt has starred in a science fiction movie where the main characters are trying to alter future events.

24. Guillermo del Toro worked on the initial design of the Mimics, even doing the sketches for how they should look and advising on how they should sound. The design changed many times during post-production, and the Mimics in the movie bear little resemblance to del Toro’s design.

25. In the book, Cage starts to get headaches from so many times in the loop. 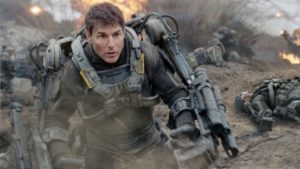 26. While preparing for her role in Edge of Tomorrow, Emily Blunt was tutored in the Israeli self-defense system of Krav Maga.

27. The Mimics don’t reset like Cage in the book, and that’s how they plan to win the war. Because they’re aquatic creatures, the Mimics once came up the Mississippi to attack Illinois. A Mimic could cover 20 meters in less than a second. The movements of a Mimic are easy to read. They’re also not very intelligent creatures and can’t plan something like an ambush in the book.

28. In the book, if Cage hadn’t been caught in the loop, he wouldn’t have met Rita, but in the movie, he meets Rita on the battlefield before the loop.

29. The Americans pronounced Keiji’s name as Cage in the book, hence his name in the movie.

30. In the book, Cage and Rita’s relationship didn’t deepen until the 160th loop.