Christopher Robert Evans, born June 13, 1981, is an American actor. Evans is best known for his superhero roles as the Marvel Comics characters Captain America in the Marvel Cinematic Universe and Human Torch in Fantastic Four and its 2007 sequel. Take a look below for 30 more interesting and fascinating facts about Chris Evans.

1. Evans began his career on the 2000 television series Opposite Sex, and in addition to his work in superhero movies, he has has featured in such movies as Not Another Teen Movie, Sunshine, Scott Pilgrim vs. the World, Snowpiercer, and Gifted.

2. In 2014, he made his directorial debut with the drama movie Before We Go, in which he also starred.

3. Evans made his Broadway debut in a 2018 production of Lobby Hero.

4. Evans was born in Boston, Massachusetts, and raised in the town of Sudbury.

5. His mother, Lisa, is an artistic director at the Concord Youth Theater, and his father, G. Robert Evans III, is a dentist. 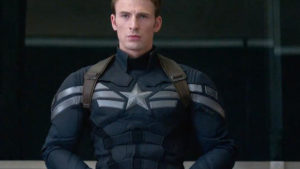 6. Evans has two sisters, Carly and Shanna, and a younger brother, Scott. Carly is a graduate of New York University’s Tisch School of the Arts and a high school drama and English teacher at Lincoln-Sudbury Regional High School, which Scott is an actor who was featured on the ABC soap opera One Life to Life.

9. He read for a role in Cameron Crowe’s Elizabethtown, but lost out to Orlando Bloom.

10. Evans had a dog named East, that was half American bulldog and half English bulldog.

11. He had signed on to do three Fantastic Four movies, but in the end only did the two, and the third was canceled. Instead, a reboot is in production. 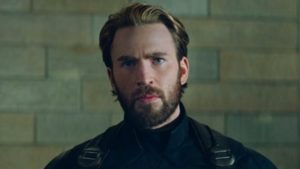 12. In June 2006, he separated with Jessica Biel, his then-girlfriend of two years.

15. He is very close friends with Scarlett Johansson, with whom he has appeared in seven movies: The Perfect Score, The Nanny Diaries, The Avengers, Captain America: The Winter Soldier, Avengers: Age of Ultron, Captain America: Civil War and Avengers: Infinity War.

16. His mother, a former professional dancer, installed a tap dance floor in the basement of their house. Evans claims to still tap dance to work through anxiety.

17. He suffered from migraines throughout making of The Avengers because of the cowl he wore.

18. Evans said in March 2014 that once his contract with Marvel is up, he may consider doing less acting so he could work more on directing, and believes that he will be finished playing Captain America in 2017. 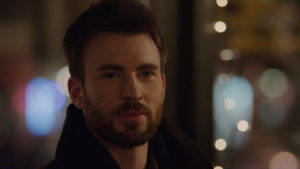 19. Evans has a big interest in the philosophies of Buddhism.

20. His favorite television series is the animated comedy The Simpsons.

21. His favorite movies are Braveheart, Hurlyburly and The Royal Tenenbaums.

22. Evans had a crush on Sandra Bullock as a teenager after seeing her in the action movie Speed.

23. He has stated at a press conference that he would have liked a possible Captain American and Black Widow romance in the Marvel Cinematic Universe following Captain America: The First Avengers.

24. He usually jokes about fellow actor Chris Pine becoming the new Captain America if he were to resign from the role. 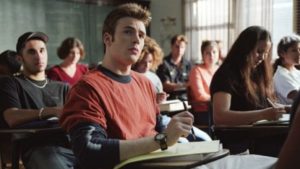 25. The costume department had Evans wear t-shirts and regular clothing a size or two smaller in order for his muscular build to show while filming Captain America: Civil War.

28. As of 2018, he has never appeared in a movie nomination for the Best Picture Oscar.

30. Although he was raised Catholic, he has expressed pantheistic views.