Annie Hall is a 1977 American romantic comedy movie directed by Woody Allen from a screenplay he co-wrote with Marshall Brickman. The movie is produced by Allen’s manager, Charles H. Joffe, and the film stars the director as Alvy “Max” Singer, who tries to figure out the reasons for the failure of his relationship with the movie’s eponymous female lead, played by Diane Keaton in a role specifically written for her. Take a look below for 30 more interesting and fascinating facts about Annie Hall.

1. Principal photography for Annie Hall began on May 19, 1976, on the South Fork of Long Island, and filming continued periodically for the next 10 months.

3. The movie received widespread critical acclaim, and along with winning the Academy Award for Best Picture, it received Oscars in three other categories: two for Woody Allen, Best Director and Best Original Screenplay, and Best Actress for Diane Keaton.

4. The movie won 4 BAFTA awards and a Golden Globe, the latter being awarded to Keaton.

5. Annie Hall had North American box office receipts of $38 million, which make the movie the fourth best selling work by Woody Allen when not adjusted for inflation. 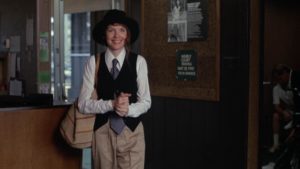 7. The movie’s screenplay was named the funniest ever written by the Writers Guild of America in its list of the 101 Funniest Screenplays.

8. In 1992, the United States Library of Congress selected the movie for preservation in its National Film Registry that includes, “culturally, historically, or aesthetically significant” movies.

9. Diane Keaton’s real name is Diane Hall and her nickname is Annie.

10. The scene where Alvy and Annie are at their psychiatrists, which looks like a split screen scene, was actually shot simultaneously on one set with an adjoining wall.

11. Alvy’s sneezing into the cocaine was an unscripted accident. When previewed, the audience laughed so loud that director Woody Allen decided to leave it in, and had to add footage to compensate for people missing the next few jokes from laughing too much. 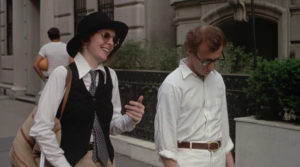 12. Annie’s outfit, which caused a brief fashion rage, were Diane Keaton’s own clothes.

13. Though frequently regarded as one of Woody Allen’s best movies, Allen himself doesn’t think very highly of it, only being able to see how much it doesn’t live up to what he really wanted it to be.

14. Annie Hall is Sigourney Weaver’s screen debut, in a non-speaking part as Alvy’s date near the end of the movie.

17. The jokes that Woody Allen tells in front of the audience at the University of Wisconsin and on The Dick Cavett Show are from his stand-up comic days. 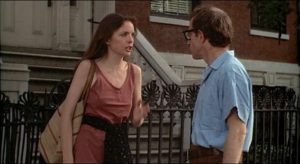 19. Woody Allen originally envisioned Annie Hall as a murder mystery, with a subplot about a romance. During script revisions, Allen decided to drop the murder plot, which he and Marshall Brickman later revitalized in Manhattan Murder Mystery.

20. One scene cut from the movie is a fantasy sequence of Annie and Alvy visiting hell. This scene was rewritten 20 years later for Allen’s Deconstructing Harry.

21. For a sequence set at Coney Island, Woody Allen once kept a crew of 200 extras hanging around for an entire morning and never found the inspiration to shoot that day.

22. Alvy never says, “I love you,” to Annie. The closest he comes is when Alvy says love isn’t a strong enough word for how he feels.

23. The first scene shot in Annie Hall was the lobster scene.

24. Brooke Shields appeared in a deleted scene in which she played a schoolgirl crush of young Alvy’s.

25. Woody Allen and Marshall Brickman came up with the majority of the screenplay by walking up and down the streets of New York City, specifically between Lexington and Madison Avenues. 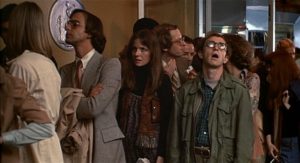 27. During the lobster cooking scene, Annie runs and retrieves a camera to take pictures of Alvy dealing with the crustaceans. Later, when Alvy runs over to Annie’s house to kill a spider, the series of photos Annie took is on the wall in the background.

28. The movie that Alvy and Annie originally intend to see, when Annie gets delayed, is Face to Face by Ingmar Bergman. Woody Allen cites Ingmar Bergman as one of his main inspirations.

29. Though uncredited, the animated scene with Alvy and Annie as Wicked Queen was drawn by Stu Hample, who was then drawing the comic strip “Inside Woody Allen” which was based on Woody’s stand-up comic days.

30. Annie Hall is the first time that Joan Neuman played the mother of Woody Allen’s character. She would later do so again in Stardust Memories.